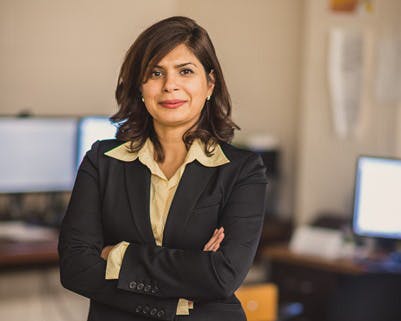 Dr. Nina Mahmoudian has applied her knowledge about flight in the atmosphere or outer space to the underwater world, designing better unmanned vehicles that take water samples or search the floors of oceans and lakes.

In 2011, Mahmoudian began her first faculty job at Michigan Technological University with advanced degrees in aerospace engineering, but, as an assistant professor of mechanical engineering-engineering mechanics there, she has devoted her research to underwater vehicles. The scientific distance between the two fields is a lot shorter than the distance between the different environments.

“For me, the fact that I deal with an airplane or an underwater glider—it looks the same. It’s fluid, just different densities and different environmental challenges and interactions,” Mahmoudian explains. “They are the same physical concepts that apply.”

A pioneering aspect of her multidisciplinary research on “autonomous underwater vehicles” involves figuring out how to keep them in continuous operation. She cites the example of the underwater probe that, while searching the Indian Ocean for the crashed Malaysian Airlines plane, had to return to a ship to recharge its battery.

“The focus of my research is to find a way to recharge on the fly. ­This will cut down on the cost of operation,” Mahmoudian says.

­That technology is in early stages of development. The solution involves overcoming hardware and software challenges for autonomous energy replenishment in dynamic environments.

Another possibility Mahmoudian cites, in the case of multiple vehicles mapping a large area of water, is deploying multiple chargers in the vicinity. ­That is a networking problem she compares to the coordinated movements of a school of fish, as each vehicle would have to dock with a charger on a schedule.

Her work on maintaining the energy of underwater vehicles in 2015 won Mahmoudian two prestigious awards for young faculty members from the National Science Foundation and the Office of Naval Research.

Minerick calls Mahmoudian “really forward-looking” because her research has pushed computer engineers who deal with robotics, for instance, to think differently. “­That, in a large part, is what has contributed to her success, and why so many are gravitating toward the concepts and ideas that she’s laying out,” Minerick adds.

Mahmoudian’s laboratory has also designed two underwater gliders, one for teaching and one for research, that are less expensive. ­The teaching one, which is called GUPPIE and looks like the sleek aquarium fish, costs about $1,000, and the other, called ROUGHIE, $10,000.

“My focus has been to make the underwater robots accessible, for education and for researchers,” she says. Minerick says that Mahmoudian’s vehicles navigate without propellers, which stir up sediment or alter water flow.

“Her pumps are pretty passive,” Minerick says. “­They don’t disturb the fluid that’s around. So she’s using principles of buoyancy and a lot of aircraft aerodynamics—just within water—to be able to control and maneuver them.”

In conducting applied research, Mahmoudian has followed in the footsteps of her father, a chemist. She was born in Germany when he was studying there. He taught for a while, but returned to Iran, where his daughter was raised, to work as head of research and laboratories at Ahvaz, a steel company.

Mahmoudian immigrated to the United States in 2003 to begin work on her Ph.D. at Virginia Tech. So is she an aerospace engineer or a mechanical engineer?

“I consider myself as a controls engineer,” Mahmoudian replies. “I’m very interested in making things work.”