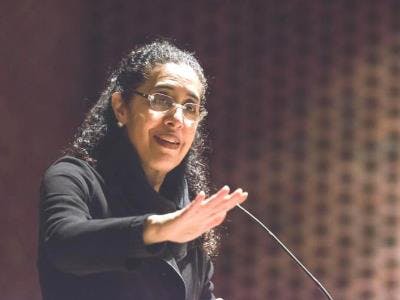 Harvard law professor Lani Guinier says of Republican lawmakers, “It’s offensive to think, ‘We’re so great that we need to wait a year before decide who should be an appointee of the Supreme Court.’”

WASHINGTON — A large-scale social movement is needed to impact political decisions in a way that makes them more reflective of the will of the American people, Harvard law professor Lani Guinier argued Tuesday during a forum on higher education.

“I don’t think most Americans are happy that they’re closing down the Supreme Court because they want to take over the presidency,” Guinier said at a forum titled, “Race, Class and Community: Democratizing Higher Education in America.”

Guinier made her remarks in response to a question Diverse posed about efforts by Republican lawmakers to stymie President Barack Obama in his efforts to appoint a justice in to the Supreme Court during what remains of his last term in the wake of the death of Justice Antonin Scalia.

“It’s offensive to think, ‘We’re so great that we need to wait a year before decide who should be an appointee of the Supreme Court,’” Guinier said of Republican lawmakers. “And their goal is to have a ‘4-4’ so that they can’t lose anything,” she said of the fact that an Obama appointee would shift the power balance of the court — 5-4 — against what was once its conservative majority.

She suggested that the need for a movement that could bring attention to issues for a “larger community of people,” but did not explicitly say whether Black Lives Matter fits the bill or not.

“If we can figure out a way to give them a sense of potential power and collaboration with others so that they’re making really important differences in decision-making,” Guinier said.

Guinier — a one–time nominee of President Bill Clinton for assistant attorney general in the Civil Rights Division of the U.S. Department of Justice — did not wade into the discussion of the pending Fisher v. University of Texas at Austin case that could curtail the use of race in college admissions.

Her talk — which touched on topics that ranged from high incarceration rates for people of color to low voter participation in the United States compared to other countries — took place in the Nitze Building of the Johns Hopkins University School of Advanced International Studies.

She admitted to being somewhat out of touch with the motivation behind many of today’s student protests on campuses throughout the nation, and instead reflected on the impact of the methods of Dr. Martin Luther King Jr., whom she said felt was undercelebrated this past King holiday.

“White Americans must recognize that justice for Black people cannot be achieved without radical changes in the structure of our society,” Guinier quoted King as saying in what she referred to as an underrecognized quote from the slain civil rights leader.

Asked what could be done to increase the enrollment and success of African-American students at America’s colleges and universities, Guinier spoke of the need for institutions and organizations to create more of a sense of community.

She cited the work of the Posse Foundation as an example of what could be done in this regard.

Working with its partner colleges and universities, the foundation organizes groups of 10 students — called “posses” — accepted into top universities on four-year, full-tuition leadership scholarships. Faculty and professors serve as mentors, “so you feel part of a group that’s working together,” Guinier said.

“As a result, enormous amounts of posses have graduated from college who go on to graduate school and get good jobs, because they feel confident, and that confidence is important for people who come from low-income families,” Guinier said. “They can’t buy the confidence. They have to perform.”

The remark is reflective of some of the arguments she makes in her 2015 book, The Tyranny of the Meritocracy: Democratizing Higher Education in America. The book criticizes the emphasis that institutions of higher education place on college entrance exams — which favor students from more affluent families who can afford test prep and other advantages — and calls for admitting and educating a more socioeconomically diverse body of students.