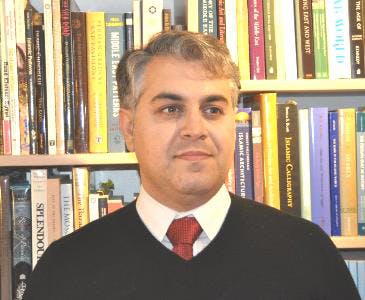 For those with an appreciation or interest in architectural marvels, Isfahan, an Iranian city famed for its splendid architectural heritage, is a good place to be. Isfahan was the capital of the Safavid Empire and is studded with extraordinary architectural works from the height of their glory in the 16th and 17th centuries.

Dr. Mohammad Gharipour, a tenured associate professor in the Morgan State University (MSU) School of Architecture and Planning, was raised in Isfahan. He credits weekly visits to the Grand Bazaar, which dates back to the 11th century, with developing his curiosity about the aesthetics and history of architectural monuments. A friend of his father was an architect, and Gharipour remembers spending hours poring over the slides and photos of temples and buildings his father’s friend took during his travels all over the world.

Gharipour went on to obtain a master’s in architecture at the University of Tehran and to work as editor at Abadi, a prominent architecture journal in Iran. The wider world was calling, however. He earned a Ph.D. at the Georgia Institute of Technology, studying under professor Douglas Allen, a visionary landscape architect who passed away in 2014.

Since 2004, Gharipour has balanced teaching and a prolific record of writing and publishing. “He’s very rigorous in his scholarship,” comments Dr. Mary Anne Akers, dean of the MSU School of Architecture and Planning.

“His take on architecture is that it always exists within a cultural context,” she says. “He has a grasp on how Muslim culture [is] manifested in the architecture, whether it’s a mosque or other gathering spaces, like gardens and similar spaces. It’s the manifestation of culture within the built environment.”

As of late, the architectural heritage of the Islamic world faces grave threats. In the midst of political upheaval, certain groups have targeted architectural monuments for destruction. After ISIS militants captured the ancient city of Palmyra over the summer, they have since set about systematically destroying iconic monuments — the Temple of Baalshamin and the Arch of Triumph, among others — that have stood the test of time for millennia. ­The rationale behind the destruction is the same that motivates any sort of iconoclasm: when a group seeks to establish its dominance, obliterating symbols of older or different powers is one way of going about it.

ISIS is not the first group to engage in wanton destruction of a region’s architectural patrimony. Gharipour says that the Taliban dynamiting of the two 6th-century Buddhas of Bamiyan in Afghanistan in 2001 was symbolic of a new, generalized movement of destruction across the Middle East and North Africa. Now it has become the norm, to the dismay of art and architecture historians worldwide. Sometimes the culprits are even governmental entities who do not see the utility or value in preservation, Gharipour says. In many cities, notable buildings, and sometimes entire historic neighborhoods, have fallen prey to urban redevelopment as urban locales expand.

Such events give Gharipour’s work a definite urgency. His most recent volume, dedicated to non-Muslim sacred precincts located in the Islamic world, was published in 2014. Since then, Gharipour says, more than four sites in the book have been destroyed.

“You can see how urgent this intellectual work is,” Gharipour says. “If we don’t document these buildings now, if we don’t take enough steps to preserve them or at least broadcast the significance of these buildings to the wide global audience, they will be gone.”

For the upcoming summer issue of IJIA, Gharipour plans to focus on “heritage,” calling on historians across the world to share their work. So far, he says, there have been submissions from places as diverse as Indonesia and Budapest.

“­The loss of a building is the loss of human history,” Gharipour says. “At the end of the day, it’s our responsibility to preserve and do our best to maintain these buildings.”