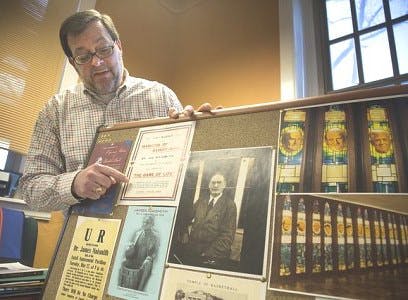 As a researcher, Dr. Michael Zogry has a theoretical interest in the cross between athletics and religion. In December 2015, while writing a book on the religious beliefs of James Naismith, Zogry made national headlines when he discovered the only known audio recording of Naismith, which features him sharing how he invented the game of basketball.

“In the interview, he suggests that something different happened” from what most people understood to be the sport’s creation, says Zogry, an associate professor of religious studies and director and undergraduate advisor of indigenous studies at the University of Kansas (KU).

As a physical education instructor in December 1891, Naismith devised the game to check roughhousing among students at Springfield, Massachusetts’ International YMCA Training School, now called Springfield College. Up until now, it was believed that he wrote the game’s rules completely and then the first game was played. But as a guest on the New York radio program “We the People,” on January 31, 1939, Naismith shared challenges of the very first basketball game.

“He realized that he needed more rules, including no running with the ball, which if you look at the order of the rules is rule No. 3, and that would suggest that he had at least one test game before he played a game with the full complement of the rules,” Zogry says, adding that the audio account doesn’t necessarily refute other stories, but sheds light on Naismith’s creative process.

The recording, which was obtained from the Library of Congress’ archives, will be included in KU’s library archives and is available now online.

Zogry gained an interest in research as an undergrad at the University of North Carolina at Chapel Hill, where he received a bachelor’s in religious studies in 1989.

“I was really interested in religious studies, broadly speaking, and then in my senior year, I took a class on Native American religions and it was at that point that I really decided it would be one of my areas of concentration,” he says.

In 1991, Zogry received a master’s in religion from the University of Chicago Divinity School. He later began work on his doctorate at the University of California, Santa Barbara, working as a graduate teaching assistant. It was there he gained a love for instruction.

“I enjoy being able to work with students and see them improve in terms of the way that they express their ideas and the way that they put them together on paper,” he says. “I enjoy the give and take in the classroom.”

Zogry incorporates both archival research and speaking to people in what he calls “cultural consultations,” as opposed to fieldwork.

“That’s an important part of my method and always has been,” he says, recalling working on his dissertation at UC Santa Barbara, where he was granted official permission to conduct research by the Eastern Band of Cherokee Indians Tribal Council. In addition to dissertation research, Zogry also worked on an oral history video documentary project administered through the Museum of the Cherokee Indian.

“I interviewed Cherokee seniors and they could speak in English or Cherokee and talk about information that they thought might be worthwhile to videotape and preserve for future generations,” he says.

Zogry received a Ph.D. in religious studies in 2003. In 2010, he published the book Anetso, the Cherokee Ball Game: At the Center of Ceremony and Identity, which was derived from his dissertation. In his exploration of Anetso, a Cherokee ball game and precursor to lacrosse, he links athleticism to religion and traditions.

He hopes to make similar correlations in his forthcoming book “Religion and Basketball: Naismith’s Game.”

“I am looking at James Naismith’s’ religious beliefs and how they informed everything he did in his life, [including] major decisions [that may have] informed the creation of basketball,” he says. As a proponent of muscular Christianity, Naismith sought to build Christian characters in young men “and [basketball] was an instrument or vehicle through which he could teach people these values.”

Naismith was hired by KU in 1898 and went on to serve for nearly 40 years as a professor of physical education, chairing the department until 1924. During an era marked by deep racial segregation, the Canadian immigrant was ahead of his time, Zogry says.

“One of the very well-known aspects of his career is his mentorship of John McLendon, an African-American basketball player who was at KU in the 1930s. At the time, African-American players weren’t allowed to play on the sports teams — McLendon himself was not allowed to play — but Naismith worked with him and got him a coaching position and McLendon ended up being a groundbreaking coach at HBCUs, he coached briefly professionally, and he’s a member of the Naismith Memorial Basketball Hall of Fame.”

In producing the book, Zogry hopes to share parts of Naismith’s life that aren’t so familiar. “I hope that they learn about his influence and how, through this game, he has invented something of global significance,” Zogry says. “It’s so significant, historically and globally; [it’s] a present if you think about all the people who participate in basketball or watch basketball and all the different ways that people interact with this creation of his — he really is quite a significant individual and he’s someone who I think is a great American success story.”