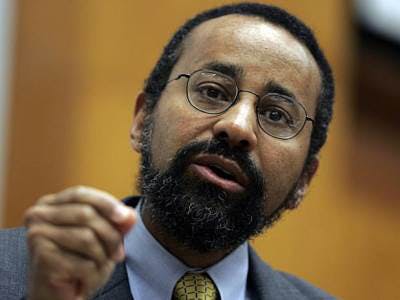 A University of California, Berkeley law professor, Christopher Edley says that his “new organization is combating the cycle of poverty with a cycle of opportunity.”

For more than three decades, Christopher Edley Jr. has used his various positions in the professoriate to fight for civil rights, especially for improving educational access among the poorest families. His most recent endeavor is yet another example of that.

“This new organization is combating the cycle of poverty with a cycle of opportunity, attacking the obstacles to success at critical stages in life,” Edley said. “Our approach to complex challenges is unique. We work across traditional issue silos and disciplinary perspectives, using an exceptionally broad range of tools to promote change at the local, state and national levels.”

The institute brings together four pre-existing organizations, including Partners for Each and Every Child, which Edley has and continues to chair. This entity works on improving preK-12 education across the board by building infrastructure across states to encourage policymakers to address the needs of students considered at risk, underserved and politically underrepresented.

Another already existing project now housed under Opportunity Institute is Renewing Communities, which aims to reduce prison recidivism by bringing college courses and job opportunities to people who are incarcerated or formerly incarcerated. Edley and his colleagues noted that about half of the Americans in this cohort are parents of underage minors.

“All of them deserve a chance to succeed,” Edley and other Opportunity Institute organizers said on their website. “We build pathways away from criminal justice and toward educational success, career entry and family security.”

Institute organizers are currently considering proposals from higher education institutions and community organizations throughout California to expand or initiate in-person classes for these individuals.

The recent launch of the Opportunity Institute underscores Edley’s longtime priorities when, in 2013, he abruptly stepped down as dean of the UC-Berkeley law school to take medical leave while battling prostate cancer. He had been dean since 2004. At that time, he noted in a letter to faculty colleagues that he felt “an urgency to turn to other professional goals, [such as] public education equity and excellence.”

When Edley’s leave of absence began, many scholars predicted that he would return to his life’s work as soon as medically feasible.

“With an intellect second to none, great understanding of both law and politics, many friends and admirers in powerful positions and an ability to visualize and accomplish things that others would never try, he will be a great asset to the lagging struggle for educational equity when he recovers [from cancer],” said Dr. Gary Orfield of the University of California, Los Angeles, who added in 2013, “[Edley] is one of a kind. We need him.”

Prior to joining UC-Berkeley as law school dean, Edley spent more than two decades as a Harvard Law School professor. There, he and Orfield, also then at Harvard, founded the Civil Rights Project in the aftermath of a 1996 court ruling that squelched race-conscious admission policies at many universities. The case stemmed from a reverse affirmative action lawsuit filed by White student Cheryl Hopwood, who was denied admission to the University of Texas law school. The U.S. Court of Appeals for the Fifth Circuit ruled against the UT practices.

Nevertheless, the Civil Rights Project (CRP) at Harvard provided research to policymakers focused on racial and ethnic inequities. By 2003, multiple friend-of-the-court briefs in a U.S. Supreme Court case involving the University of Michigan cited CRP research showing the impact and benefits of racial diversity in higher education. Ultimately, the Supreme Court justices cited CRP in the majority opinion that upheld the university’s use of affirmative action in admissions.

Edley and Orfield were among the 2012 winners of the Dr. John Hope Franklin award, the Diverse annual recognition for excellence in higher education.

Today, Orfield is co-director of the current iteration of CRP, which has a revised named. The entity moved with him to UCLA, where he is a distinguished research professor of education, law, political science and urban planning.

Meanwhile, Edley returned to the UC-Berkeley law faculty following his medical leave and has taught at least one course there for four consecutive semesters, including this one. The courses include administrative law principles and a seminar on educational policy and law. A year ago, he and UC President Emeritus Mark Yudof, who now teaches law at UC-Berkeley, partnered in the classroom on a seminar course titled, “Education Law Policy and Reform: Regulatory and Statutory Design.”

At the Opportunity Institute, the governing board features a slate of high-profile people, who, like Edley, have strong ties to academia. They include Yudof; Robert Reich, Chancellor’s Professor of Public Policy at UC-Berkeley and former secretary of labor during the Clinton administration; Bill Richardson, the senior fellow for Latin America at Rice University’s James A. Baker III Institute for Public Policy and former governor of New Mexico; and Thomas A. Saenz, a former adjunct law instructor at the University of Southern California who’s currently president and general counsel of the Mexican American Legal Defense and Educational Fund.

With backing from multiple charitable foundations, the Opportunity Institute has a $9 million budget. Most of the staff is in Berkeley, but a few are based in Washington, D.C.