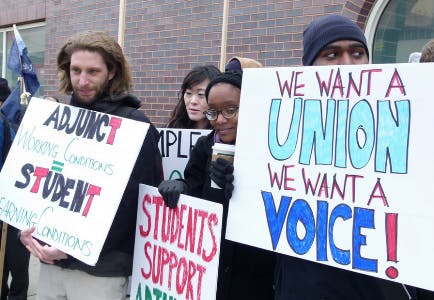 Dr. Jason Brennan, not pictured, said that any characterization of adjuncts’ working conditions as being similar to slavery and sweatshops are both “absurd and offensive.”

As adjuncts throughout the nation continue to organize themselves into collective bargaining units and push for more resources, two university professors have publicly questioned whether it’s wise for institutions to cave in to their demands.

“To give adjuncts more, universities need more money. They will have to reallocate that from other sources or raise revenue,” writes Drs. Jason Brennan and Phillip Magness in a recent paper titled Estimating the Cost of Justice for Adjuncts. A Case Study in University Business Ethics. “It is not obvious how easily they can do that without serious unwanted negative effects. It is not clear why universities should focus on helping adjuncts rather than reducing their costs or otherwise helping poor students.”

The authors found that the cost to U.S. universities could increase to a total of $24 billion from $4.3 billion for courses currently taught by adjuncts if unions were to have their way.

Brennan, who holds the Robert H. and Elizabeth Flanagan Family Chair and is an Associate Professor of Strategy, Economics, Ethics, and Public Policy at the McDonough School of Business at Georgetown University, said that campaigns by adjuncts to liken their work situation to slavery and sweatshop conditions are both “absurd and offensive.”

On average, he said that adjuncts—who mostly hold master’s degrees—make about $2,700 for each class a semester. Adjuncts who hold a Ph.D. are usually paid about $3,100 per course.

As a demographic, he said that a majority of all adjuncts in the U.S. hail from upper-middle-class backgrounds and 90 percent are White.

“With the student debt crisis and the question of who is going to college, if universities care about social justice issues, there may be a better place for them to put their money,” said Brennan.

Working with the Service Employees International Union, adjunct faculty at Duke voted earlier this month, 174 to 29, in favor of unionization—despite the fact that North Carolina is a right to work state.

Duke adjuncts have called for improved working conditions and the elimination of short contracts that don’t guarantee long-term employment.

But at large institutions where adjuncts teach multiple sections of required introductory-level courses, it remains unclear if full-time faculty who are specialists in a particular discipline will want to teach these classes.