Administrators Get Bulk of Chicago State University Payout for Layoffs

After a period of financial difficulties, Chicago State University has laid off nearly 40 percent of its staff, or 400 employees, since the beginning of the year. The layoffs came with a $2.2 million price tag, primarily in severance pay.

Of that $2.2 million, nearly $1.6 million went to severance payouts for about 50 administrators in June, the Chicago Tribune reports. Another $650,000 went to unused vacation time for 130 administrators and civil service employees. 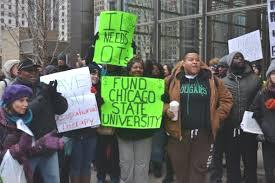 By comparison, 10 faculty members who were laid off last month did not receive severance pay. According to the union contract, tenured faculty are allowed to work for at least one academic year after receiving a layoff notice ― except in the event of “extreme and immediate financial exigency,” the Tribune reports.

Severance pay for CSU administrators was the result of a longstanding university policy requiring that administrators are to be notified of a potential termination anywhere from three months to a year in advance of being let go. Employees who have worked at CSU for six years and more are entitled to a year’s notice prior to a layoff.

Faculty layoffs were in the music education, political science, philosophy, and bilingual education departments. The loss of tenured faculty positions suggests an erosion of historic understandings of what tenure means, said William Jason Raynovich, CSU music professor who lost his job in the recent layoffs.

“Tenured faculty are supposed to be tenured, they’re not supposed to lose their jobs unless it’s in a dire situation,” Raynovich said.

CSU was brought to this position due to a budget stalemate in Illinois, which resulted in financial shortfalls at all the state colleges and universities. All public institutions of higher education felt the pinch, but CSU’s position was particularly tenuous as it derives up to a third of its operating budget from state funds in a typical fiscal year.

Over the course the budget crisis, the university did not receive any state funding until April. Illinois also withheld funding for the Monetary Award Program grants, which provides tuition assistance for the state’s neediest students and is a source of revenue for institutions of higher education. Without the flow of cash from the state, CSU was in a state of financial emergency, and sent out layoff notices to all 950 employees in late February.

CSU’s financial challenges are not yet resolved. The Tribune reported that student enrollments are projected to decline by about 20 percent, and that the university is cutting its budget by 30 percent to $70 million.