In 2011, the American Association of University Professors (AAUP) published a report, “­The Ivory Ceiling of Service Work,” which discussed the challenges facing women associate professors attempting to combine scholarly research and the commitments of teaching and service. ­The results showed serious disparities between men and women faculty. 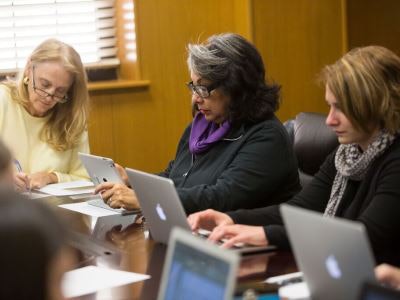 ­The report stated that these disparities amounted to roadblocks for women and showed that “men focus more on their research, which earns greater prestige and potential for promotion.”

­The report, based on original research as well as other literature, recommended that institutions dedicate more resources to mentoring for women faculty and “workshops that emphasize the ‘pathways’ to full professorship.”

“­The Women Faculty Writing program is responding to a need — a need for time, space, connection, and frequent accountability,” Dr. Elizabeth Sharp, TTU associate professor of human development and family studies, tells Diverse. Sharp, one of the co-founders of the writing groups, points out that all faculty need time and space to write and discuss their research with colleagues.

However, she says, “­This is especially true for women faculty members,” citing the abundance of research indicating that women faculty are asked to perform more service than their male counterparts.

­The positive response in terms of numbers and enthusiasm has underscored the need. “We have grown from 17 to 50 members in just one year,” Sharp says, adding that there are now five groups with approximately 10 members in each group and positive results in terms of productivity.

TTU launched its program after Dr. Caroline Bishop arrived from IU, where she had participated in that institution’s Women Faculty Writing Program. “They were very generous to let us borrow from their model,” says Bishop, an assistant professor of classical language and literature studies, referring to her former colleagues at Indiana.

Bishop recalls telling Sharp “about how much it [the IU program] had helped me productively and … the kind of community I experienced being around these women scholars.”

They soon discovered that preconceived ideas about how the groups should be organized were, in fact, misconceived.

“At first we had two groups, and one was more quantitative and the other was more qualitative — roughly humanities versus sciences and social sciences,” Bishop explains. “But we found that we liked it better (without) having that kind of breakdown because everyone works differently both disciplinarily and individually. We found that people in different disciplines could give each other really good feedback that you might not otherwise encounter, so we don’t do that anymore.”

At IU, Laura Plummer, director of the university’s Scholarly Writing Program, says they started out with 14 participants in two groups. Now there are 171 members, of which 136 are women. Ten of the 15 groups are women-only — the others are co-ed. Each group has a facilitator.

“There’s a lot of literature out there about the amount of service that women do, especially women of color who are asked to help diversify university and departmental committees, and women tend to do more mentoring of undergraduate and graduate students,” Plummer explains. “So universities have found that women are retained at lower numbers and there is a longer gap between being promoted to tenure and being promoted from tenured to full (professor).”

Similar to the response at TTU, Plummer says the groups at IU are “helping to change the culture, and faculty enthusiasm and participation continue to grow.”

Although there is co-ed participation in some of the groups, “this program is predominantly to support women and women of color,” she says.

The experience of African-American women at predominantly White institutions (PWIs) has been the subject of considerable literature, including “Maids of Academe,” published in 2008 in the Journal of African American Studies, which examined “the disproportionate role African American women assume in service, teaching, and research as a result of being in the numerical minority at PWIs.”

An example of efforts to address that combined racial and gender disparity is the University of Iowa College of Law’s Lutie Lytle Black Women Law Faculty Writing Workshop, an annual four-day gathering of current and aspiring Black women law faculty held in conjunction with a writing retreat.

One of the IU scholars, Dr. Tessa Bent, an associate professor of speech and hearing sciences, says in a university promotional video, “It’s been one of the programs that has helped me the most with my productivity, particularly with writing. I think having this dedicated time will really help with achieving that next role in my career, promotion to full professor.”

The programs are structured around two basic strategies: daily writing and group accountability to reinforce motivation. Participants set and share goals, record their progress and commit to regular attendance.

Plummer is quick to point out that she was not the originator of the idea at IU.

Two female deans attended a leadership conference and heard a discussion about women-only writing groups, pursuing the idea when they returned. “They approached me and asked if I could do something like that here,” she says.

The directors at both institutions stress the importance of commitment of resources from university leadership. Both directors say they have received inquiries from faculty and administrators at other institutions interested in setting up their own groups, and some are now in the beginning stages.

At TTU, the groups produced a brochure containing testaments from participants and highlighting the “deliverables” — the members’ outcomes — which included numerous research articles submitted and accepted, research grants and fellowships awarded, and other achievements.

In addition to the publications and the grants, Sharp says that, in the short period that the TTU writing groups have been in existence, feedback from participants has been encouraging.