Attorney Artis Hampshire-Cowan spent more than two decades at Howard University, where she served as senior vice president and secretary of the board and held several interim positions including COO and acting president. With that arsenal of leadership and governance experience, Hampshire-Cowan recently entered the highly competitive world of college consulting, as a senior fellow at AGB Consulting, a component of the Association of Governing Boards of Universities and Colleges. 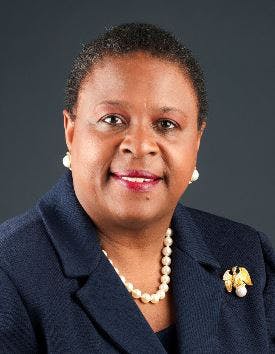 Artis Hampshire-Cowan is a senior fellow at AGB Consulting.

She is among a growing number of higher education leaders who have transferred their skill sets from academia to the consulting career track, a path that many senior administrators in academia are taking as more national and global professional services firms develop higher education practices.

It can be a lucrative area, particularly for presidential search consultants. According to a study released in June by Dr. James Finkelstein, a professor emeritus of public policy at George Mason University, an increasing number of universities are using search firms to find presidential candidates. The study, which reviewed presidential search contracts at 61 public institutions, found that the firms were paid between $25,000 and $160,000 for their services, with the average fee being $78,769.

After being part of the leadership team at Howard, one of the nation’s largest historically Black institutions, Hampshire-Cowan says she moved into consulting because “I know and understand corporate governance … and because I’m known as a special-forces-turnaround person and a mission-driven person.”

She also has “a passion for helping HBCUs,” as an alumna of Morris Brown College and because of her years at Howard.

Hampshire-Cowan, who served under four presidents at Howard, occasionally faced difficulties and controversies during some of those administrations. “Anyone having served in the roles that I’ve served in, in a large, complex organization will face challenges and adversity and there are lots of lessons learned and scars earned, but for me, Howard was worth that,” she explains.

Hampshire-Cowan is quick to point out that there are certain misconceptions about the higher education consulting field.

“Retirement in the sense of just kicking back is not what this is. It’s for somebody who still has energy, passion and commitment, in addition to experience,” she says.

Since arriving at AGB as a senior fellow, Hampshire-Cowan says she has explored subjects of particular interest; for example, she helped author the organization’s statement on campus climate, inclusion and civility.

Peter Stokes, managing director of Huron Consulting Group, believes there is opportunity in the field, even as it becomes an increasingly competitive arena. However, like Hampshire-Cowan, he cautions, “I certainly don’t think it is for everyone.”

Stokes says some retirees and veteran senior administrators may underestimate the demands of the field. “When people have the wrong understanding, they seem to think of it as being a casual experience, or something you can do on a flexible basis, almost like being an Uber driver.”

Stokes adds that, if former university administrators are interested in working with a national or global firm, they should be aware that “those organizations run very hard, work long hours and juggle many client projects at one time. Are folks ready for the pace? That’s a key question.”

Stokes, who has a Ph.D. in English from Stony Brook University, has settled into his current role as a consultant after experience in higher ed administration.

“I made the decision to leave academia and go on the business side,” he says. “My areas of focus are university strategy or strategic planning, and I do a fair bit of work in what we call the student space,” Stokes says, explaining that this includes admissions and the overall student experience.

He has served as vice president for global strategy and business development at Northeastern University. In 2014, Stokes landed at Huron, a global professional services firm that includes higher education as well as business and other sectors.

“I do a fair bit of work in what we call the student space,” — a term that includes admissions, student services and the overall student experience.

John Garland, an attorney and president of Central State University (CSU) from 1997 to 2012, is now executive chairman of the recently established firm TM2 Education Search, which states on its website that it identifies and recruits candidates for executive positions in higher education with an emphasis on Black institutions.

“I decided to do this to give back to the community that both educated me and provided me with a wonderful opportunity for leadership,” Garland says, adding that, as a consultant, he now has “an opportunity to have one-on-one mentoring and coaching” with presidents, senior leaders and boards.

According to Garland, the firm specifies HBCUs in its mission statement “because we believe that Black institutions can benefit from an organization that is focused on their leadership needs.”

At the core of a successful presidency is a strong relationship between the president and governing board, according to Garland and Hampshire-Cowan. Garland attributes the longevity of his tenure at the Wilberforce, Ohio, HBCU to his relationship with CSU’s board.

“If an institution is failing, the first thing I would look at is the board,” he says. “There is a tendency of board members, particularly those who are alumni, to really love the institution and quite frankly, to love it to death — and that’s on the record,” Garland quips.

He suggests that in those situations some board members may believe that they know more about the institution than an outsider coming into the presidency. Garland notes that such problems are not the norm but occur “from time to time” and may be ameliorated by board-training programs.

Hampshire-Cowan also focuses on shared governance and improving the connection between boards and presidents, a relationship that she contends is critical to the success of the institutions.

“I think strong boards pick the right president and together they help an institution be successful,” she says.

“One of our greatest challenges,  and why I thoroughly enjoy this work, is focusing on strengthening the effect of governance — the leadership team of the president and board. You need a leadership team that understands their respective roles and works together to achieve the objectives of the institution.”

Garland expresses a hopeful view of the consulting profession as a viable option for former academic leaders.

“It’s up to the individuals to make that decision,” he says. “But I think it’s a good way and a positive way for those who have the background and knowledge to impart that knowledge and experience to others.”