Runstedtler Thrives at Intersection of Race, History and Sports

Previously an assistant professor at the University at Buffalo (SUNY) and a Mellon postdoctoral fellow at the University of Pennsylvania, Runstedtler now leads the Critical Race, Gender, and Cultural Studies Collaborative at American University (AU), where she has been chair since fall 2015. 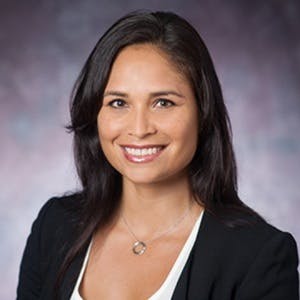 The Canadian-born history professor brings her own distinct identity and research interests — race, gender, resistance in popular culture, imperialism and globalization — to the interdisciplinary program that explores “diverse voices, histories and experiences through socially engaged scholarship,” according to the program’s website.

Runstedtler’s intellectual endeavors began at York University in Toronto, Canada, where there were few courses in the history department that dealt with questions of race, social justice and social movements, she says. One African-American history course, however, inspired her to further her studies by enrolling in a graduate program in the United States.

“I wanted to figure out how we got to where we are and about the interrelations between the situation in the U.S. regarding slavery, internal colonialism … and how that related to not just the Canadian context, but the context all across the global South,” Runstedtler tells Diverse.

She says that she uses an intersectional framework to analyze different concepts, adding that she is always thinking about how what she studies manifests itself in culture and how systems of oppression like patriarchy, White supremacy, and heterosexism all intertwine.

Her passion for sports in her adolescence has also found a way into Runstedtler’s scholarship. Growing up, she was a figure skater and a soccer player, and she was on her university’s rugby team. Before she returned to graduate school at Yale University to complete her Ph.D., she was a professional dancer.

This also fed her intellectual curiosity and love for history, race, sports and their intersections in culture. Her book Jack Johnson, Rebel Sojourner: Boxing in the Shadow of the Global Color Line explores the first African-American world heavyweight champion’s life and resistance against colonialism, White American exceptionalism and racism in the early 20th century.

“There’s a long history of athletes and entertainers becoming a flashpoint for these larger discussions” of race, politics and power, she says. It is why she enjoys researching the intersections of these converging dynamics, adding that she has included figures like Colin Kaepernick and other Black sports heroes into her class discussions.

Runstedtler also has published scholarly articles in the Radical History Review, Journal of World History and Canadian Issues, and book chapters in Escape from New York: The New Negro Renaissance Beyond Harlem and In the Game: Race, Identity and Sports in the Twentieth Century. The African-American history scholar has also been awarded prestigious fellowships and has received the Phillis Wheatley Book Prize for her book on Jack Johnson in 2013.

With a newborn son, achieving work-life balance is still in progress, she says with a laugh. She adds that the support of her partner has made a big difference in how she engages in her work inside and outside the classroom.

This semester, Runstedtler will be returning to AU from maternity leave with plans for a new department lecture series exploring how people conceptualize and rethink what resistance means in the current sociopolitical climate.

Runstedtler says restructuring her department has been “a work in progress,” partly due to the push toward more technical and STEM-focused areas of learning. However, she and her colleagues want to ensure that their department at AU is a safe, physical and intellectual home for students to engage in conversations around race, gender and cultural studies related to anything that they see in the news, their communities or on campus.

“I have learned to listen, listen, listen and tried to figure out how to use everyone’s different strengths to the advantage of the department,” she says.

Runstedtler says that she is lucky to be working with people who are committed and interested in creating spaces for those conversations, and she is excited for the courses and programming that the CRGC department has in store for the year.