Having studied Spanish, Japanese, Portuguese and French, Dr. Lauren Johnson, assistant dean of the College of Education at the University of North Georgia (UNG), knows how demoralizing it can feel to struggle for one’s words in a new language. And, having taught abroad in Venezuela, Iraq and China, she also knows the alienating feelings that can come with navigating a foreign culture for the first time.

Early on in her career, she saw the effects those cultural and linguistic barriers had on her first classroom of students and their parents. As a teacher for the Columbia Urban Educators program in New York’s Washington Heights, she often worked with first- or second-generation immigrants who were learning English as a second language. 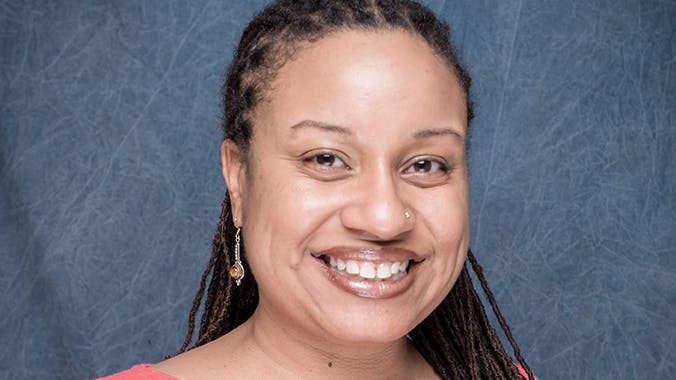 Dr. Lauren JohnsonMany “didn’t have the language to describe the inequalities that they were experiencing,” says Johnson, who earned her master’s in TESOL (Teaching English as a Second or Other Language). “So that experience set me up to learn a lot more about our education system and what it should be doing.”

She recognized the need for culturally competent teachers who understood the backgrounds of their students.

“If families, parents and kids don't feel comfortable in school, then they're not going to want to become teachers,” she says. “They're not going to feel like that's something that they can aspire to be in life, so then we maintain a [disproportionately] white teacher demographic. It's important that we consider what that impact has on students who may not feel seen or heard in their own school.”

For a lifelong linguaphile who knew she wanted to be a teacher early on, combining anthropology with education seemed the perfect path for Johnson, who has built her career on making education accessible to minority students, especially immigrant students.

“Anthropology teaches things holistically,” she says. “Rather than focusing on the individual parts, it looks at how we work together. So, when I consider education, I'm considering issues of culture, language, class, ability and disability.”

In other words, she knows that when people enter the classroom, they don’t enter solely as students or educators. They bring their whole selves — their beliefs, their cultures, their languages — with them.

That’s why Johnson has helped build two pipeline programs with a local school district in Georgia to help encourage more students of color to opt for teaching careers. “RISE,” or Realizing Inspiring and Successful Educators, works with Hall County (GA) Schools, to place Hispanic graduates of UNG’s education program in teaching positions in the district. The Aspiring Teachers Program works in partnership with the Gainesville City School System to recruit minority students into the teaching profession and support them along their path to a teaching career.

Early this year, Johnson received recognition from the Georgia State Assembly for her role in both programs. During a 2021 session, State Rep. Will Wade (R-Dawsonville) presented a resolution honoring Johnson “for her efficient, effective, unselfish, and dedicated academic and community service to the State of Georgia."

It’s not the first time she’s received recognition for her work. In 2017, she was a Governor's Teaching Fellow and selected for the Fulbright-Hays Seminar Abroad Program. In 2019, she received the UNG Diversity Champion Award followed by the Emerging Leader Award in 2020. She has also secured five UNG-based research grants over the years.

“As an applied anthropologist, I’ve been trained that it's not enough to do research just for the sake of doing research,” she says. “There needs to be an end goal, a purpose.”

An “educator first and anthropologist second,” some of her recent research has taken her abroad again to South Africa, where she is studying how the country is contending with disparities in its K-12 education system “in a time period after legal racial segregation” and “in a social context of white socioeconomic dominance.”

If the context sounds similar to the dynamics of K-12 education in the U.S., that’s because it is, she says.

“In terms of racially polarized societies, we have a lot in common with South Africa,” says Johnson. “We have some similar challenges and some that are very different, but I think it's possible to learn from each other.”

Knowing and learning from other cultures seems to be the theme of her career, and it’s one that she continually emphasizes to aspiring teachers.

“You have to get to know your students,” she says. “You can't effectively teach K-12 students without knowing their background, histories or culture.”

This article originally appeared in the September 16, 2021 edition of Diverse. Read it here.