A self-described “stellar mortician,” Dr. Enrico Ramirez-Ruiz, a professor within the Astronomy & Astrophysics Department at the University of California, Santa Cruz (UC Santa Cruz), studies the deaths of stars — spectacular, high-energy explosions that create the very elements humans are made of. In describing these deaths, Ramirez-Ruiz emphasizes that astrophysics isn’t something distant from our lives on earth but deeply intertwined with them. 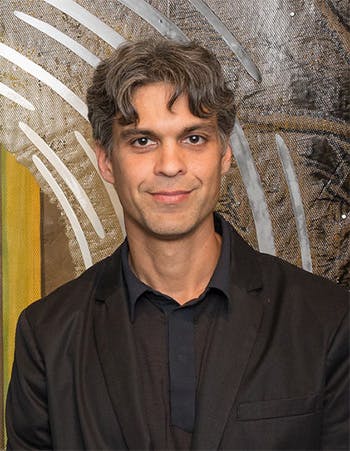 “The fact that you and I share the universe in our bodies and that the atoms in and around us once belonged to a dying star and were synthesized there — that makes the narrative of who we are so incredibly powerful,” he says, adding that it also makes human constructs of race appear all the more meaningless.

In other words, astrophysics is about “embracing our common origin,” says Ramirez-Ruiz, who sounds as much a poet as a scientist when he speaks.

Th e White House honored Ramirez-Ruiz with the Presidential Award for Excellence in Science, Mathematics and Engineering Mentoring, which recognizes mentors who are expanding STEM talent, in February.

“I became an American seven years ago, so being recognized at the highest level is really an honor,” says Ramirez-Ruiz, who is originally from Mexico City. “The first thing that came to my mind was that a lot of the work that I have done has been validated. And now I have the tools to put more pressure on the system.”

He’s hoping the award will give him leverage in expanding other diversity-oriented programs. Aft er all, for Ramirez-Ruiz, increasing the number of marginalized students in STEM isn’t just a matter of social justice. It’s a matter of scientific excellence too. And, in true scientific style, he’s done his own qualitative experiments to prove this.

In one of his classrooms, Ramirez-Ruiz divided students into homogeneous groups and diverse groups and then presented each group with a complex problem that required a solution. As expected, he says the diverse groups almost always reached a more creative solution than the homogenous groups.

While Ramirez-Ruiz had always been fascinated by the natural world, it wasn’t until he landed an undergraduate research opportunity at Los Alamos National Laboratory in New Mexico that he set his sights skyward.

While studying gamma ray bursts alongside his mentor, the astrophysicist Ed Fenimore, Ramirez-Ruiz says he was thrilled by the idea that the basic laws of physics learned on earth could be extrapolated and used to describe magnificent astrophysical phenomena too.

“That was when I was like, ‘I want to be an astrophysicist,’” he says. “It was because of my experience as an undergraduate doing research that I became hooked to astronomy.”

Knowing how life-changing that research experience was for him, Ramirez-Ruiz is now providing a similar experience to undergraduate students through his summer research program, the Lamat (“star” in Mayan) Institute, which is housed at the University of California, Santa Cruz. For eight weeks, Lamat students get to explore current research questions within astronomy and planetary sciences using highly advanced computing.

At Lamat, roughly 43% of students come from community colleges, two-thirds are first-generation students, and two-thirds come from historically marginalized groups in STEM.

Whatever a student’s background, Ramirez-Ruiz says the Lamat Institute “eradicates that idea that your initial conditions matter and define you.”

Of the 94 students who have graduated from Lamat, 12 have won NASA postdoctoral fellowships (the most prestigious in the field), 16 are National Science Foundation graduate fellows, and 19 are professors. In fact, according to data from UC Santa Cruz, Ramirez-Ruiz and the Lamat program have together trained half of all historically marginalized students receiving astronomy Ph.D.s in the United States within the past five years.

But what wasn’t expected — and what impressed him — was that diverse groups also tended to take longer to deliberate and arrive at a solution and, when they did, they felt less confident that it was the best solution. Meanwhile, students from the homogenous group were quick to arrive at a solution and less likely to question themselves — a factor that often led to less creative, and perhaps less effective, solutions.

Ramirez-Ruiz calls the converging of diverse perspectives when confronting a problem “constructive friction.”

He adds that their creativity has shaped him into a better scientist too.

“The access that I have had to students with unique perspectives has made me a much better scientist,” says Ramirez-Ruiz.

“I have done much more innovative work and much more creative work, because of my ability to open doors to individuals that currently don’t have access and because of the perspectives that they bring to their science.”
Read Next