Kevin R. Johnson has been named winner of the Michael A. Olivas Award, a national award from the Association of American Law Schools (AALS) that recognizes leadership and mentorship in diversity and mentoring in the legal academy.

Johnson said he was touched by the award because its namesake, Michael A. Olivas, was a friend, colleague, and mentor.

“He was a brilliant, prophetic scholar, and a risk-taking and pathbreaking advocate for underrepresented groups in the legal academy, and the world,” Johnson said. “I am extremely grateful to be the first recipient of the Michael A. Olivas Award.”

During Johnson’s tenure, the law school has been lauded for its majority-minority faculty and overall emphasis on diversity, equity and inclusion (DEI). 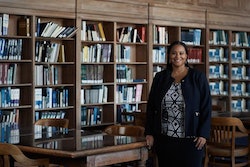