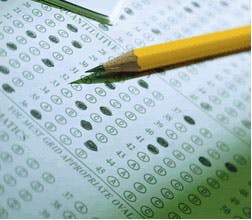 The more than 1.66 million students who took the SAT in 2012 were the most diverse group of students in the college entrance exam’s history.

The more than 1.66 million students who took the SAT in 2012 were the most diverse group of students in the college entrance exam’s history, but the mean scores in critical reading and writing dropped by a single point, a College Board report released Monday shows.

Along similar lines, 28 percent of the SAT takers in 2012 were English-language learners, up from 27 percent the previous year and 24 percent in 2008, the report shows.

The mean math score has remained stable in recent years, but scores in critical reading dropped four points since 2008, and writing scores dropped five points during the same period.

College Board officials say the broader diversity of students taking the test is a factor in the decline in SAT scores, but that diversity in and of itself does not explain the drop. Rather, they say, the biggest predictors of success on the SAT were whether students had taken the core curriculum, rigorous courses, and the level of education of their parents.

The benchmark score indicates a 65-percent likelihood of achieving a B- average or better during freshman year in college. Research suggests such a grade is indicative of a “high likelihood of college success and completion,” the report states.

Similarly, the report states that students who had taken AP or honors courses were nearly twice as likely to meet the SAT benchmarks in reading, mathematics and writing than students who did not.

“It is absolutely critical that we support first-generation college families,” said James M. Montoya, vice president of higher education relationship development at the College Board. “When one generation succeeds, it raises the bar for each success generation.”

“Taking a college entrance exam is a critical step on the road to higher education, but many traditionally underserved students face financial, familial and geographic barriers that can prevent them from testing,” the report states. “Providing these students with the support and resources they need is crucial to meeting our nation’s long-term college completion goals.”

The College Board granted SAT fee waivers to 22 percent of SAT takers from the class of 2012—a record high and 61 percent higher than in 2008.

Additional insights into various groups of students’ performance on the test can be gleaned from statistics on those who got the fee waivers.

During a Q&A session for the release of the report, a reporter asked why reading and writing scores had dropped but math scores have remained steady.

Wayne Camara, vice president for Research & Development at the College Board, said the reason is because more students are taking calculus and pre-calculus than in years past, but the same was not true for English and the social sciences.