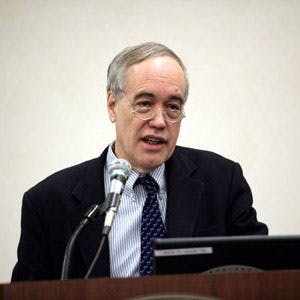 Dr. Gary Orfield is Professor of Education, Law, Political Science and Urban Planning at UCLA and co-director of The Civil Rights Project at UCLA

WASHINGTON – The U.S. Supreme Court should continue to allow the narrow use of race in college admissions because it achieves diversity in ways that race-neutral policies cannot, a group of social science researchers argued Thursday during a briefing on the soon-to-be heard Fisher v. University of Texas at Austin case.

“Some say you could do this by relying on social class … . We tried that,” said Dr. Gary Orfield, Professor of Education, Law, Political Science and Urban Planning at UCLA and co-director of The Civil Rights Project at UCLA.

The shortcoming of class-based affirmative action, Orfield said, is that it fails to account for the fact that children from middle-class Black and Latino families still end up attending inferior K-12 public schools in poorer neighborhoods more than Whites from similar backgrounds and thus have a distinctly different pre-college experience.

“You would not be able to reach the fact that middle-class Black and Latino families experience many disadvantages despite being advantaged and living in diverse neighborhoods,” Orfield said.

When California used class-based affirmative action, he said, it ended up benefiting students who had recent immigrant parents with high education levels but low incomes. Such students, he said, could not have needed affirmative action because it would be impossible to show they were discriminated against due to their newness in the United States.

Orfield was one of several scholars who spoke at the briefing that the American Educational Research Association held Thursday regarding a brief the organization filed in the UT Austin case.

Among other things, the brief lists what social science research shows about the benefits of diversity and argues that race-conscious admission policies remain necessary as opposed to race-neutral alternatives that fall short of achieving the kind of diversity needed to produce educational benefits documented in the research, such as better understanding across racial groups.

When asked by Richard Kahlenberg, senior fellow at The Century Foundation, why colleges could not look at other factors, such as the neighborhood where a student grew up and whether it featured a high concentration of poverty, to achieve a “fair version of class-based affirmative action,” Orfield conceded that it could be done but not in a practical way.

“If you added enough factors together, if you required everybody to report their wealth, racial segregation of their neighborhoods, the history of what kind of educational parity their children had, you could come up with something that would be a much better approximation of what race is in the United States,” Orfield said. “But the chances of getting people to do that are virtually non-existent.” He also said it would be “intrusive” to require families to report that level of detail.

Thursday’s session, like others that have been held or that are set to be held soon in Washington, D.C., seemed aimed at trying to influence the Supreme Court to take a stronger look at research in support of a particular position in the UT Austin case.

In this regard, it was similar to a recent Brookings Institution panel discussion on the University of Texas case in that it was webcast for convenience and featured statements that were directly aimed at the Supreme Court Justices or their clerks and research staff.

The research cited at the AERA briefing, however, could not have been more dissimilar from that at the Brookings panel, where academics presented research that sought to show that “mismatch”—a phenomenon wherein minority students with weaker academic credentials are said to struggle academically and thus not try as hard when placed in competitive environments at selective universities—was one of the harmful effects of race-based affirmative action.

The AERA briefing focused on what makes minority students disadvantaged in the first place and why race-conscious admission policies represent the best way to set things aright.

Flores also cited research that shows that any “rebuilding” of the level of racial and ethnic diversity at Texas flagship institutions has been due to shifts in demography as opposed to race-neutral policy changes.

“Does a policy work because it actually raised educational attainment or representation, or is it a function of demography?” Flores asked.