Colleges Across the Country do Their Parts to Encourage Voting 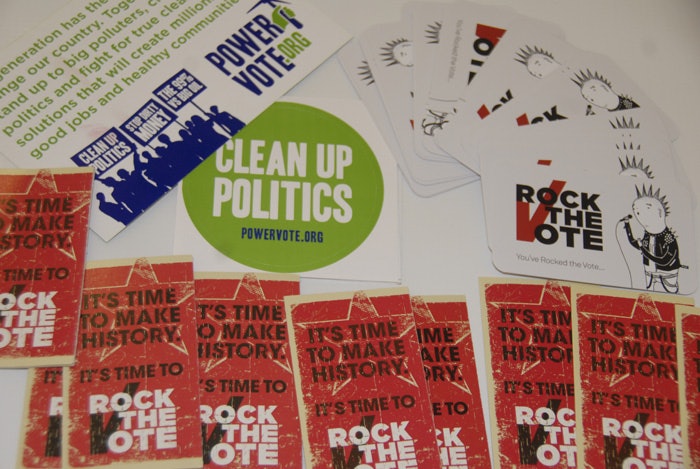 Students at universities around the country are engaging in voter registration campaigns.

When U.S. Sen. Barack Obama launched his bold bid in 2007 for the presidency of the United States, the contingency of college-aged voters was paramount to deciding the outcome of the election.

As in past big election years, college students mobilized in large numbers, that year mostly rallying to Obama’s call to help him lead a major turnaround in how the nation is run and who runs it.

Today, with only weeks left before the November 6 election and higher education funding emerging as a major issue in this year’s election battle, college campuses are again at the center of the intense election campaign between now-President Obama, seeking re-election, and former Massachusetts Gov. Mitt Romney.

As the candidates blaze trails across the country, frequently using college campuses as the site of their public political rallies, campuses are abuzz with students, faculty and staﬀ working to get their peers and others engaged in this year’s national elections. They’re holding seminars on the importance of participating in the election, how to register to vote and how to vote by absentee ballot.

“Much like the broader population, there is overwhelming interest” in this year’s election, said Dr. Alvin Thornton, a political scientist and current associate vice provost for academic affairs at Howard University. “Whether it turns into turnout is another question. That’s still to be determined.”

Even students who candidly say they have lost some of the zeal that sent them to the polls four years ago — most to vote for Obama — say sitting this election out is not an option.

They say their personal feelings are secondary to larger higher education community concerns about the future of federal funding for college aid and Pell Grants, political diﬀerences over federal student loan programs and the ongoing debate over the DREAM Act for the children of undocumented immigrants.

“In 2008, we thought we were part of a movement,” said Rock the Vote student volunteer Shakei Haynes, a 22-year-old senior who voted for the ﬁrst time in the 2008 election. “What happened was that movement was not connected to anything afterward,” said Haynes, who voted for Obama. “We were waiting to be called with what do we need to do next. There wasn’t that kind of dialogue.”

Haynes said he is deeply engaged in this year’s election, despite the disappointment.

“I’m active because I understand the seriousness of this election. The college vote is important because a lot of these policies affect us,” he said, echoing a list of concerns voiced by other students around the nation.

Gearing up to ﬁght

At the University of Texas at San Antonio, 70 students, staff members and faculty were sworn in this summer as “Volunteer Deputy Registrars” in Bexar County, Texas, to promote voter registration and register citizens to vote at the campus polling location on Election Day in November. In November 2010, students registered 2,700 new voters. This year, they hope to register 5,000, said a university official, noting that the “get-out-the-vote” effort is non-partisan.

In Washington, D.C., when Howard University and Morehouse College recently faced off for their fall football classic, students and faculty from both institutions used the occasion to generate interest in the election. Part of a current events symposium — featuring the presidents of the student government associations at both institutions — was focused on the importance of participating in this year’s election. Just outside the event hall, students were staffing a Rock the Vote information table, providing election information to potential ﬁrst-time voters, ranging from where to register locally to how to apply for an absentee ballot.

In Louisiana, where recession-driven state budget cuts have slashed annual funding for state universities, the Student Government Association (SGA) and student NAACP chapter at Grambling State University combined forces at the start of the school year to marshal get-out-the-vote efforts. At Southern University in Baton Rouge, the SGA and several Greek letter clubs organized a register-to-vote project on the main yard of the university campus.

In California, students at California State University, Dominguez Hills (CSUDH) spent two days of Welcome Week this month registering students to vote. By November, the school plans to have sent several mass emails to CSUDH alumni reminding them it’s election year, held several get-out-the vote drives and staged a ballot initiative forum, at which ballot issues directly related to higher education funding will be discussed. CSUDH, a minority-majority institution in the Los Angeles area of southern California, has a voting site on its campus at which its students, most of whom are commuters, can cast their ballots.

In Georgia, universities in the Atlanta area have formed two coalitions around voter registration and mobilization, one focused on the Atlanta University complex that consists of Spelman and Morehouse colleges and Clark Atlanta University, the other a larger coalition that includes Spelman, Morehouse, Emory and Georgia State universities and the Georgia Institute of Technology.

At Texas Southern University, the SGA and Collegiate 100 student chapters are hosting a political debate in October with debaters representing Republican and Democratic Party platforms. Organizers expect some 5,000 students and community residents to attend.

“Some of the issues important to them are, of course, insurance, ﬁnancial aid, Pell Grants and jobs following graduation,” said Texas Southern spokesperson Eva Pickens. “Our students are also concerned about additional resources for student support services like scholarships, mentoring and tutoring for students from underserved and unserved communities.”

Pickens said that during early voting and on election days, traditionally, Texas Southern students take busloads of students to vote.

On Election Day, the students walk to the polls, she said. The university itself has sent several electronic blasts since school started, reminding students to register to vote, she said.

Howard University SGA President Brittany Foxhall, a 20-year-old senior from Detroit, said student government presidents across the nation are corresponding with one another (a process made easier by the use of the Internet and social media) about the election. The Council of Presidents, the oﬃcial body of SGA presidents in the Washington, D.C., area, is no exception, she said.

“The [political] climate has energized us,” Foxhall said, referring to the issues being debated in Congress and by the presidential candidates that have a direct impact on higher education. “Students are concerned about how they are going to pay for school, threats to cut Pell Grants,” said Foxhall, whose college education is being paid for with Pell Grants, student loans and other ﬁnancing. A first-time voter, she has no scholarship funds.

Morehouse Student Government Association President Anre Washington echoes Foxhall, noting the future of ﬁnancial aid is critical to Morehouse men. “A lot of brothers at Morehouse do receive Pell Grants,” he said, referring to the federal higher education grant program for low-income students. The same goes for interest rates on student loans, he said, noting that while he does not get a Pell Grant, he does have college loans in excess of $20,000. “It’s unnerving how many new laws have been produced,” aimed at cutting federal aid for higher education, Washington said.

There was a consensus among those interviewed that there is not as much momentum about this fall’s election as there was in 2008, when Sen. Obama became the ﬁrst Black man to win the presidency and did so on a broad-based appeal for a fresh approach to government.

That mood assessment aside, Washington sounds a reminder frequently voiced by others: “The country belongs to those who show up on the day of voting.”