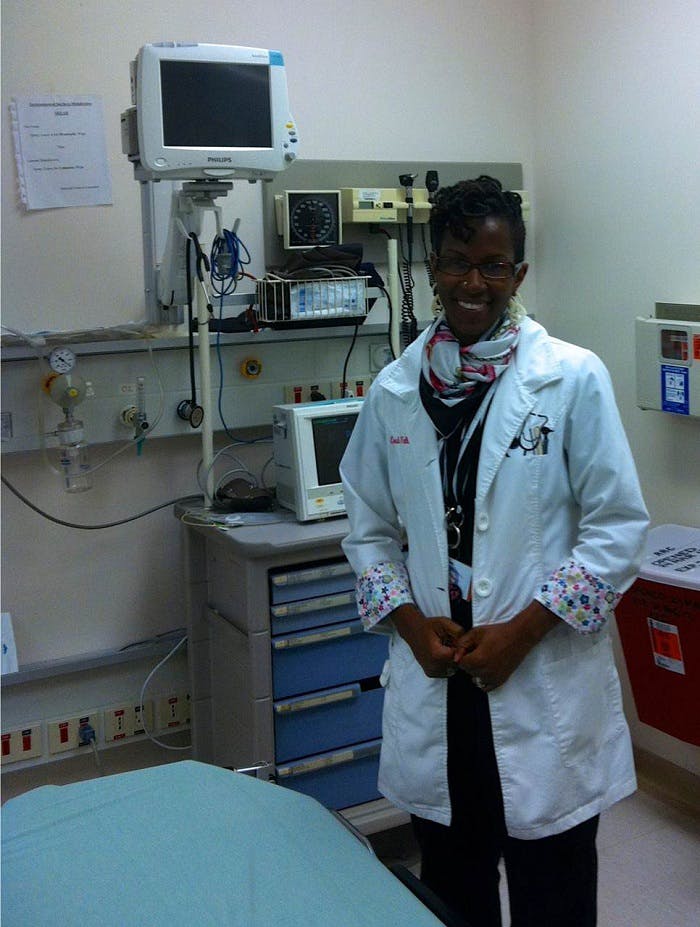 Artemis Society co-founder Dr. Erikka Magra says “the lack of mentors and models can make medicine seem impossible. … Artemis is about saying there are options.”

Dr. Myeisha Taylor couldn’t help but take notice the day she spotted her then 4-year-old daughter, riveted on the TV screen and mimicking a brown-skin cartoon character who, herself, was suited in a white physician’s coat and floating through the front door after a day’s work.

Never mind that that animated Disney Junior character, Dottie “Doc” McStuffins, was registering stuffed animals’ heartbeats with a pink toy stethoscope and was doing so with the kind of precision that imparts real lessons on the science of healing. That just might stir a preschooler’s curiosity and, even then, shape her career trajectory, said Taylor, founder of what has become a global project to push more female physicians of color into the pipeline.

“What captured my attention is that the ideas they introduce are pretty accurate, even if they teach it in pre-school language,” said Taylor, an emergency room doctor in suburban Dallas-Fort Worth, Texas. “After I watched I realized this cartoon character’s mother was a doctor, coming home in her white coat and asking ‘What’s your dad cooking?’ That’s my life.”

Given the disproportionately lower rates of wellness among people of color than among Whites—driven by everything from lack of finance to insufficient self-care to lingering distrust of mainly White-run medical institutions—Taylor has co-launched a campaign aimed at urging more students of color to pursue medicine and to create means of putting medical school within their reach.

Since its somewhat accidental launch—it all started with a Facebook collage of 131 Black women doctors thanking Disney for making Doc McStuffins a Black girl—the We Are Doc McStuffins Project & Artemis Medical Society has achieved a global membership of more than 2,400 women who either are practicing medical, osteopathic or naturopathic physicians or enrolled in those respective medical schools. While 90 percent are in those fields, the rest are in other areas of medicine.

“I was just intuitively inclined toward becoming a doctor,” said Artemis Society co-founder Dr. Erikka Magra, who practices emergency medicine at the U.S. Naval Base in Naples, Italy. Coming up, she was one of a handful of Blacks in her San Diego schools. Her doctor was White and a wonderful caregiver. His race didn’t factor into her decision as much as her view of science as very cool stuff.

For those who seem, on the surface, less scientifically inclined, exposure to doctors from their own environs and background, though, is key.

“They may see it in the abstract but aren’t certain they can do this, or don’t have the intuition to say ‘I’m gonna go for it,’” Magra said. “The lack of mentors and models can make medicine seem impossible. … Artemis is about saying there are options.”

Magra and Taylor, the society’s president, were classmates at the University of Southern California Medical School. Before that, they earned bachelor degrees from Xavier University in New Orleans, which, for decades, has tied Howard University in the number of baccalaureates they’ve shipped off to medical school. Xavier now is drafting its plan for partnering with Artemis, which hopes to have a particularly high profile at historically Black colleges and universities. Sixty-five percent of Black doctors were HBCU undergraduates. A conference call is set for next week.

“Saturday, we dedicated the St. Katharine Drexel Chapel … here on campus. Her mission was all about social justice and educating African-Americans. The work our alums are doing in this association and in their everyday lives, that’s them living the Drexel mission,” said Kimberly Reese, Xavier’s director of alumni relations. “They’re doing the work we hoped they would when we invested in them as students. It’s important. And we’re very proud of them.”

The need for a more diverse pool of doctors is dire, said Taylor, whose initial interest in medicine followed her father’s slaying on a Los Angeles street corner during the 1992 riots over the police beating of Rodney King.

What keeps her in emergency room care, in part, is what Taylor witnesses among the poor, uninsured, uninformed and disproportionately minority people for whom emergency care often is both a last resort and first course of action.

As importantly, both doctors said, the shared cultural beliefs and norms—even myths—shared between same-race doctors and their patients can often facilitate optimal medical care.

“When I talk to patients and I say ‘You need to take your blood pressure pill,’ they say ‘That’s a pill for the White man.’ And I say, ‘No, who told you that?’ That kind of exchange can make a difference,” Taylor said. “Not that it takes a Black doctor to treat Black patients. But having a diversity of physicians is extremely important.”

Artemis’ growing presence on Facebook is only part of its bids to entice more female students to study medicine and to prepare early for its rigors. The Society also hosts online seminars on topics ranging from how to develop a culturally/racially sensitive medical practice to how to get into pharmaceutical research and other key areas of medical care.