Key Question of Oral Arguments: Do You Want Grutter Overturned? 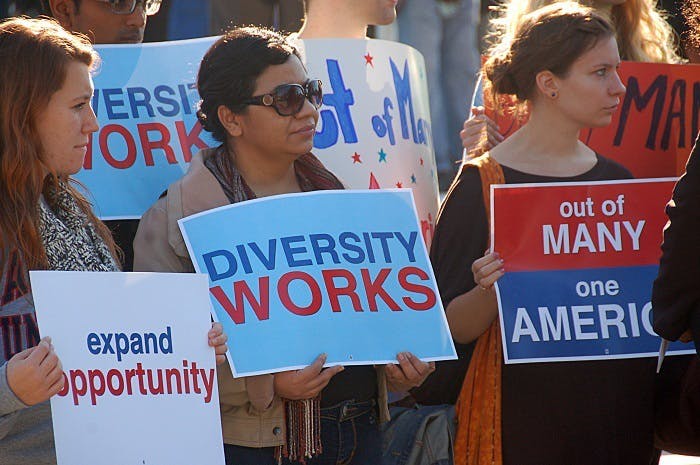 Supporters of race-conscious affirmative action gathered at the steps of the Supreme Court on Thursday.

Washington — Of all the questions that Supreme Court Justices asked of the attorneys who delivered their oral arguments Wednesday in the Fisher v. University of Texas at Austin case, one of the most pointed was directed at Fisher’s attorney.

“Are you asking us to overrule Grutter?” Associate Justice Stephen G. Breyer asked Fisher’s attorney, Bert Rein, referring to Grutter v. Bollinger, the 2003 Supreme Court case that permits the narrow use of race in college admissions to achieve diversity.

“Grutter said it would be good law for at least 25 years,” Breyer told Rein. “And I know that time flies, but I think only nine of those years have passed.”

Despite the laughter that followed, the question of whether to overturn Grutter is one of the most crucial that the Court will consider as it deliberates in the case that could restrict or abolish the use of race in college admissions and, proponents of race-conscious affirmative action say, damage hard fought-for efforts to achieve diversity on campus.

Conversely, the Justices could render a decision that could leave in tact the status quo for the balance of the 25 years that then-Justice Sandra Day O’Connor said in her 2003 opinion in Grutter that race-conscious affirmative action may still be necessary to achieve diversity on campus.

“Why overrule a case into which so much thought and effort went and so many people across the country have depended on?” Breyer asked, amplifying a question raised in court documents filed in support of UT Austin.

Rein replied that he was not arguing that Grutter should be overruled, but that the problem has been “varying understandings” of how universities can achieve diversity through the Grutter decision.

“Is it necessary to use race to achieve that interest?” Rein asked.

And so began oral arguments in what will inevitably become one of the most important Supreme Court cases that could impact how universities form the freshman classes of the future with the “critical mass” of minority students that was envisaged by the Grutter decision.

Much of Wednesday’s hearing sought to clarify just what is a “critical mass,” whether it was a numerical figure or proportional to the demographics of the state in which a university is located, or achieved by reaching some other measure.

“What is that number?” Chief Justice John G. Roberts asked. “What is the critical mass of African-Americans and Hispanics at the university that you are working toward?”

The question was, in many ways, a legal landmine to be sidestepped. If UT Austin attorney Gregory Garre had stated that the university had a specific numerical goal in mind, it would have been in direct conflict with previous rulings by the Supreme Court that racial quotas are impermissible.

“Your Honor, we don’t have one,” Garre said.

“So how are we supposed to tell whether this plan is narrowly tailored to that goal?” Justice Roberts asked.

The question concerns the fact that the Grutter decision only allows race to be considered in a “narrowly tailored” way.

A similar question had been raised earlier by Fisher’s attorney, Rein, who remarked that, “if you think about narrow tailoring, you can’t tailor to the unknown.”

“If you have no range of evaluation, if you have no understanding of what critical mass means, you can’t tailor to it,” Rein said.

Justice Alito asked whether critical mass varies from group to group or state to state.

“It certainly is contextual,” Garre said. “I think it could vary.”

Justice Alito asked if UT Austin deemed the critical mass as being dependent on the demographics of Texas.

“It’s not at all,” Garre said. “It’s looking to the educational benefits of diversity on campus.”

“So we should stop calling it mass,” Associate Justice Antonin Scalia quipped at one point. “Call it a cloud or something like that.”

One line of questioning by Justice Scalia seemed to indicate his skepticism toward campus diversity officers.

“I am curious to know …. how many people are there in the affirmative action department of the University of Texas?” Justice Scalia asked after the conversation turned toward how a university knows if diversity exists at the classroom level, where UT Austin said diversity is lacking.

“There must be a lot of people to, you know, to monitor all these classes and do all of this assessment of race throughout the thing,” Scalia continued. “There would be a large number of people out of a job, wouldn’t they, if we suddenly went to just 10 percent?” he said in reference to Texas’s Top Ten Percent plan, which grants students in the top 10 percent of their high school class admission to public universities in Texas.

Garre said he didn’t have a specific number of affirmative action office employees at UT Austin but said that diversity is “an important part of improving the educational experience for all students at the University of Texas no matter what their race.”

The colloquy was just one of several in which justices sought to pin down certain facts or specific definitions of terms or what would happen in hypothetical scenarios, such as whether race would serve as a “tiebreaker” in a case where there were two identical applicants but one was White and the other was a racial minority.

One of the most humorous instances came when Associate Justice Stephen Breyer listed each of the criteria on which candidates would have to be identical—from socioeconomic status to GPA to awards, work experience, community service and SAT scores—in order for that scenario to occur.

“If … all those things were absolutely identical, then the person would be admitted on the bounds of race?” Breyer asked.

“Not necessarily,” said U.S. Department of Justice Solicitor General Donald Verrilli, who appeared to argue that the U.S. government, in particular its military, has an interest in seeing universities develop leaders from diverse backgrounds in order to compete in a global economy.

Of all the justices who spoke during the case, Associate Justice Sonia Sotomayor was one of the most active in terms of commentary and questioning.

She essentially gave Garre a warm welcome after he asserted in his initial statements that UT Austin’s admissions plan was constitutional because it was “indistinguishable in terms of how it operates in taking race into account as only one modest factor among many for the individualized considerations of applicants in their totality.”

“I put that in the ‘narrowly tailored’ category,” Sotomayor said, attempting to set a tone that the court, or at least she as an individual justice, deems UT Austin’s admissions policy as using race in a way that is consistent with the language in the Grutter case.

Associate Justice Anthony Kennedy, widely seen as the swing vote in the case, said he “had trouble” with Rein’s brief that argued UT Austin’s race-conscious admission plan is “not necessary to achieve a diverse student body because it admits so few people, so few minorities.”

“I said, well, if it’s so few, then what’s the problem?” Justice Kennedy said.

Rein said the issue was that UT Austin should consider other race-neutral alternatives, such as putting more emphasis on socioeconomic factors and less on personal essaid.

“So now we’re going to tell the universities how to run and how to weigh qualifications, too?” Justice Sotomayor asked.

“It’s not the job of the Court to tell them how to do it,” Rein replied. “It’s their job to examine the alternatives available to them and see if they couldn’t achieve the same thing.”

To look at the slideshow of Wednesday’s rally:   Fisher Vs. University of Texas Slideshow