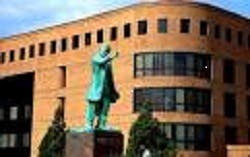 Hampton University is undergoing what it’s officials characterize as a “purposeful decline” in enrollment.

When college officials across the country talk about their final tally of Fall 2012 enrollment, the discussions produce assessments that are all over the map.

Some institutions, like Hampton University, are pleased to see their enrollment declining. Others, like Florida A&M University, are wondering how they are going to make up for revenue shortfalls stemming from final numbers that came in much lower than expected. Many institutions, Bowie State University among them, are relieved that lingering economic effects of the Great Recession were no more damaging this fall than a fender bender. A few, like Fisk University, have much to cheer, as this fall saw a reversal in the downward spiral of their enrollment numbers.

With recruiters already hard at work seeking prospects for the Fall 2013 school year, the ink is still drying on the final 2012 numbers at many schools. Yet, enough feel confident about the results to date for Fall 2012 to explain how their real-time experience compares to their goal for the season and what ideas and strategies figure into the upcoming recruitment campaigns.

“We’re moving toward a purposeful decline” in enrollment, said Angela Boyd, director of admissions at Hampton University. With a long-term strategy of reducing enrollment by nearly 1,000 students from a high of 6,300, Boyd said the tough job this year was sifting through the more than 16,000 applications the university received in search of the target of 900 students. Holding new admissions to that number would help bring overall enrollment down by 500 students to 5,500 for the 2012-2013 school year.

Boyd said the “purposeful decline” strategy reflects Hampton’s decision that it was getting too big to maintain its ideal average class size of 15-16 students per class. The enrollment gains were also testing the university’s ability to “make sure services and resources are available,” said Boyd. Among other things, Hampton provides about 23 percent of its entering freshmen with merit-based scholarships, some funded from income on its $250 million endowment.

At Bowie State University in Prince George’s County, Md., the lingering bite of the Great Recession made its presence known on the recruiting home stretch as many students who had signed up for this fall were unable to pay their enrollment bills before deadline, an unexpected turn of events that hurt an otherwise successful recruiting campaign. At Bowie State, where tuition is under $5,000 a year, enrollment slipped to 5,421 students from 5,602 in Fall 2011. Its goal was to “incrementally” exceed the 2011 enrollment level.

“Our students this year were experiencing more financial difficulty,” said Cassandra Robinson, director of university relations and marketing, echoing officials interviewed at several other institutions. “Families did not seem as prepared as in typical years,” said Robinson, noting “a lot of the decline was entering students.”

Like other tuition-driven institutions, such as Benedict College and Clark Atlanta University, Bowie State, whose enrollment is dominated by students in need of state, federal and private donor and lender aid to make college costs work for them, found many parents were unable to put up funds to help with tuition bills. Robinson and officials at several other schools also cited what they characterized as an alarming surge in denials by federal student aid officials of Parent Plus Loans (PPL) — low cost college education loans whose repayment is guaranteed by parents.

“We did not anticipate this,” Robinson said, referring to the number of students who would not be able to complete registration. “We thought we were pretty much on target. Late in the cycle, the anticipation [of an incremental enrollment increase] looked pretty promising.”

While the inability of students to pull together sufficient funds stood out as the headline explaining the enrollment decline, Robinson said officials suspect the shopping list of other deterrents includes the changes in financial aid verification. The legendary FAFSA form, the voluminous document required of all students seeking financial aid, now requires an Internal Revenue transcript to verify certain family income data. Any “new wrinkle” in the registration process becomes another hurdle for some prospects in the path of going to college, Robinson said.

Florida A&M University, which saw enrollment fall by nearly 1,000 students from this time a year ago to 12,027 students, cites a combination of factors in its enrollment decline — increased admission standards, a 12 percent boost in tuition that made it even more financially challenging to attend the university, and the tarnished reputation it suffers in the aftermath of last fall’s death-by-hazing of a university drum major.

In Houston, Texas Southern University (TSU) trumpeted how it has been able to increase freshman enrollment this fall to 1,364 students while honoring its goal to “optimize enrollment of college-ready students” by gradually raising admissions standards by half a point since 2009 to 2.5. The freshman class admitted this fall had a high school grade point average of 2.7.

TSU President John M. Rudley credits the university’s newly-formed admissions committee with helping the university meet its recruitment and enrollment goals, including screening so-called “borderline” students with a GPA of 2.5 or below and deciding to admit 158 students with these lower grade point averages based on other showings of potential to succeed in college.

The strategy of aiming higher was much the same at the University of Texas San Antonio, a Hispanic-serving institution. Dr. George Norton, vice president for student affairs, said the overall slippage from the university’s enrollment goal by nearly 500 students was “anticipated” once the university realized its freshman enrollment would be down. The silver lining in the enrollment decline is that the smaller student body signed up for more semester hours. That helps offset the loss of some revenue from overall head count, Norton said, suggesting that students who are attending the university are more focused on graduating on time, if not sooner than the standard four years.

Like tweaks to an automobile to prepare it for the rigors of winter driving, institutions are employing a variety of strategies as they try to lure prospects for Fall 2013.

Even with a steady overflow of applicants, Hampton plans to become even more selective as part of its plan to reduce enrollment while attracting top students.

“It’s a competitive process for recruiting overall,” said Boyd. “Everybody is recruiting almost the same students. To win, you offer a quality experience.”

Bowie State’s Robinson said the university is planning a “more robust” recruitment of honors students and prospects who want to focus on science, technology, engineering and math. The university is “beefing up” its recruitment of transfer students, especially those coming from community colleges. It has hired an additional person for its admissions and recruiting staff to focus on articulation agreements with other institutions of higher learning and “strengthening” the university’s relationship with community colleges.

When reminded that enrolling more transfer students would not impact how federal and state agencies measure graduation rates (they are based on following freshmen cohorts through their scheduled four-year or six-year path), Robinson echoed officials at other institutions, saying, “We are focused on graduating all the students who come to us. What matters is not how many students you have, but how many you graduate.”