Nearly 250,000 veterans and service members are each paying an average of $10,000 per academic year out-of-pocket while using the GI Bill to attend a public college or university because of the changes in their educational benefits regarding residency for tuition purposes, according to the Student Veterans Advocacy Group (SVAG).

A recent report by Jason Thigpen, SVAG founder and president, claims that only 10 percent of schools in the University of North Carolina school system offered “adequate services, facilities, and resources.” 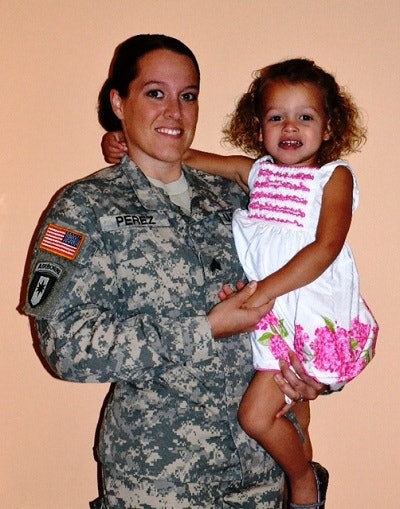 Hayleigh Perez has taken an active role in fighting for military veterans’ rights after experiencing frustration first-hand at being denied an in-state tuition rate.

The report, titled “Analysis & Audit Of North Carolina’s UNC School System” stated that, as of August 2011, the 9/11 Veterans Educational Assistance Act of 2010 “detrimentally impacted thousands of veterans attending public colleges in North Carolina” resulting in “veterans with a financial burden of paying the difference between the in-state and out-of-state tuition rate.”

“Prior to this change, Veterans Affairs paid up to $17,500 in tuition per academic year, regardless of residency classification,” the report added.

Hayleigh Perez was one of the students affected by the bill. After an honorable discharge from the U.S. Army in September 2009, Perez decided to pursue her master’s degree. She and her husband, Sgt. 1st Class Jose Perez, who is currently on active duty, were relocated on a temporary recruiting assignment to Texas but they continued to pay property taxes for the home they had purchased in North Carolina.

Perez was accepted to both colleges but was only considered an in-state resident at Fayetteville State although she applied to both schools, meeting registration deadlines for the spring semester with the same documentation to prove in-state residency, which included a deed to her house, her voter registration information, her North Carolina driver’s license, and her husband’s orders.

Pembroke still denied her appeal without explanation, according to Perez. After researching the subject matter, she came in contact with Thigpen at the SVAG and wanted to re-appeal with representation.

Perez was not only denied the opportunity to re-appeal with representation but also greeted with “hostility and aggression,” said Thigpen.

Though Perez said that she isn’t sure what the exact reason for the denial is, “it’s been alluded to through conversation and comments that I read in articles that maybe it was the lack of paying income taxes in the state, but I am an unemployed, stay at home mom and a full-time student so I don’t pay taxes to anyone.”

“The documentation she presented did not qualify her as an in-state residence at both the institution and state appeals level,” said Sandy Briscar, executive director of University Communications and Marketing at Pembroke, who handled all media inquiries on the matter. “Because Ms. Perez’s circumstances have changed and her husband is now stationed in North Carolina, she would be considered an in-state resident were she to re-apply to a UNC institution.”

According to Perez, no one has reached out to her from the school to relay this information, but, even if they did, the problem would still be there. She explained that she does not want Pembroke to reconsider based on her husband’s active duty status but to consider her veteran status and to work toward consistent and fair standards for veterans across all the schools in the UNC system.

Perez and Thigpen agree that the main problem in the UNC school system is consistency or the lack thereof for veterans’ support.

Thigpen offered McDonald’s as an example.

“If you went to McDonald’s in Florida and you went to it in Washington state and it didn’t taste the same, McDonald’s would have a problem, but McDonald’s even tastes the same in Iraq,” said Thigpen.

As Perez and Thigpen continued their efforts to fight for other student veteran rights and set up a meeting with Kimrey Rhinehardt, vice president for Federal Relations and the primary liaison between the University of North Carolina and the federal government, they had other instances that angered them.

“I have never seen such unprofessionalism as we saw yesterday,” said Thigpen. “You should have been there to witness her coming out the front door of the building as we were leaving.” Thigpen said that, despite a cast around her ankle and crutches, Rhinehardt came running out of the front door of the building with no crutches, yelling at them. As for presenting the petition, Perez said that she wasn’t given a chance to present anything.

The next step for Perez and the SVAG is to schedule a meeting with the board of directors to further discuss the issue but currently no date has been set. As for the government’s reaction, although the U.S. Department of Veterans Affairs was aware of this specific issue, they said they were unable to discuss an individual case because of privacy regulations.

“VA simply has no authority to determine eligibility criteria for schools or states,” said Randy Noller, a spokesperson for Veterans Affairs. “This includes their criteria for tuition.”

Ed Kringer, director of the Office of State Liaison and Education Opportunity in the Department of Defense, also could not comment on the specific situation matter but offered insight on what the government is working on to make transitioning easier for service members and their families.

“Normally, most states require in addition to you doing all the things they require to establish residency, they also have a 12-month waiting period before you are declared an in-state resident,” said Kringer. “We may well be asking states to consider waiving that 12-month requirement so if you have a transitioning service member who wants to go to school and says I want to establish my residency in this state, they could do so immediately as long as they took the proper steps to establish residency.”

According to Kringer, 15 to 17 states already offer a variation of this policy.  For instance, on the Maryland ballot for this year is a referendum that includes the veterans’ issue, mentioning that voting “for” the measure extends the time in which honorably discharged veterans may qualify for in-state tuition rates.

As for Perez, who is currently attending a private college, Methodist University, in Fayetteville, N.C., attending Pembroke is no longer a priority. Instead, she aims to make things easier on other veterans in similar situations by creating awareness of discrimination and telling her story.

“To further drive that home, we are not accountable to any one entity, and our main goal is to make this right for all veterans, so, if we decide to shake hands with someone, then it has to be with that same goal in mind,” said Perez, who now is vice president of social media at the SVAG. “There needs to be action; talk is cheap.”

Thigpen agreed, stating that, although he isn’t personally affected by this situation, he takes it personally that his fellow veterans are affected.

“When you are over there in Iraq or Afghanistan and you see some of the things and have to do some of the things that we have had to do, you quickly realize that the only people you can count on are your fellow soldiers,” he explained. “You live for them, and you will die for them, too; that’s why we are here.”