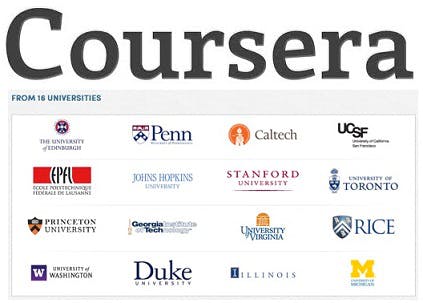 Companies like Coursera enable universities to offer online classes to students who may not otherwise enroll.

Ivy League institutions have offered on-line courses for decades—but they’ve never seen anything like this.

Through two ventures, Coursera and edX, some of the Ivies and a host of other universities began offering free courses this year in everything from politics and history to math and computer science. And they’re finding that the numbers of people who can be reached through MOOCs, massive open online courses that are generally free, are staggering.

The University of Pennsylvania, which has invested money in Coursera, the biggest, fastest-moving MOOC venture so far, has had more than 500,000 people enroll in its Coursera courses. More than 1.7 million people have signed up for all of Coursera’s courses since it started up in the spring, its founders say.

Penn started out by offering three courses, focusing on vaccines, pharmacology, and health care policy, in June. It now offers 11 courses, from calculus to operations management to Greek and Roman mythology. About a third of the students are from North America, and many are from Brazil, Russia and India. But the rest are from all over the world.

Students young and old are plugging into MOOCs with all sorts of personal agendas. Youths and adults who can’t afford to go to universities or can’t get in see MOOCs as a way to build skills and open doors down the line.

For others, the free courses have meant a chance to expand their knowledge in their own professions, or test the waters in something else. Others simply enjoy learning. In northern New Jersey, a group of people over 80 years old who live in an assisted living facility are taking Penn’s poetry course and holding discussions about it.

Students watch videos of lectures, take quizzes that let them know instantly whether they’ve understood the material, and get regular homework. Course materials, including any textbooks, are available online.

But a key part of the learning process is students helping each other online, MOOC enterprises say.

Some courses have teaching assistants on hand to answer questions, but they say other students often provide answers before they even get a chance to respond. Some ventures even do peer grading of exams and projects, saying the huge number of students giving feedback actually helps ensure fairness and accuracy.

Students don’t get credit or a degree, but do receive a certificate if they pass the course. EdX, a not-for-profit enterprise founded by Harvard and MIT, is giving students the option of taking a proctored final exam for one of its courses. It currently offers eight courses from the founders and the University of California, Berkeley, and is bringing in the University of Texas system as well.

Universities say they don’t want to be left out of a grand experiment that might be forging new and better ways of teaching.

Columbia University’s own online offerings date back to 1986, and it currently has for-credit courses, most of them for a fee, on medicine, environmental research, engineering, journalism, international affairs, Asian languages and culture and continuing education.

Still, Columbia became one of 17 new partners with Coursera announced last fall, including Brown University, Emory University, Mount Sinai School of Medicine, Vanderbilt, University of Florida and others.  Princeton University and Penn are also among the 33 Coursera universities.

Columbia will offer courses on financial engineering and risk management and on natural language processing starting in February and on MOS transistors at an undetermined time. About 30,000 students have signed up so far.

“We wanted to see what we can learn—improve what we’re teaching already in in-person classes,” said Sree Sreenivasan, chief digital officer for Columbia.

Although some say the Ivies risk diluting their brand, Deirdre Woods, Penn’s interim executive director of open learning, says she believes the opposite. “Penn is a big school, but there’s no way we can accept every single student. This way, knowledge is disseminated on a global level.”

Penn has relationships with people all over the globe, she says. “I see it as brand-building.”

Universities were struck by the potential of MOOCs in the summer of 2011 when two Stanford University professors offered a free online course on artificial intelligence that drew 58,000 participants.

The experience led to one of the professors, Sebastian Thrun, to form Udacity, a venture that got an even bigger reaction for its first free online class, also on artificial intelligence—160,000 students from more than 190 countries, it says.

Udacity now offers 18 courses on topics ranging from introduction to physics to creating a start-up and is building a job placement program with input from high-tech companies and recruiters.

But the biggest player is Coursera, which was launched in the spring by two Stanford computer science professors and now lists 200 courses offered by 33 universities, mostly from the U.S.

Co-founders Andrew Ng and Daphne Koller say their students come from about 196 countries. Courses are chosen that highlight a university’s strengths as well as provide diversity, they say.

Lectures that are split up into shorter segments based on topic, interspersed with short quizzes, are very effective, they said in an e-mail.

“Although we cannot completely replicate the personal interaction one can get in a physical classroom, we are experimenting with online communities and forums that allow our students to interact and learn from each other in ways that are similar,” they wrote.

They say building capacity is a major focus. “We believe that building the infrastructure to support hundreds of thousands of students to participate in a single course is very important to the future of education,” they wrote.

Yale has yet to join any of the MOOC ventures, but is studying the issue. A committee will analyze national trends, get feedback on its two online offerings, the free Open Yale Courses and tuition-charging Yale Summer Session Online, and issue a report by the end of the year.

Open Yale Courses are freshman and sophomore level introductions to subjects such as classical music, astrophysics and the Old Testament. The non-credit courses have been accessed by millions of people since they began in 2007, according to Diana Kleiner, the founding director.

Four of the courses are now offered through OpenStudy, a social learning network where students can help each other.

As a leader in education, Yale should look at MOOCs, Kleiner said. “From my point of view,” she said, “you need to experiment if you want to keep teaching au courant.”