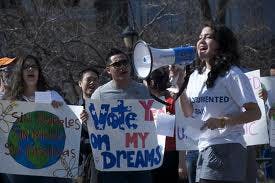 Maryland voters have had a long time to consider the tuition measure, which was signed into law more than a year ago by the Democratic governor before it was put on hold by the successful petition drive.

ANNAPOLIS, Md. — Maryland could become the first state in the nation to decide by popular vote that illegal immigrants can be eligible for in-state college tutiton, if students have attended a high school in the state for three years and if they or their parents have paid state income taxes during that time, along with other requirements.

State lawmakers approved the measure last year after long debate in the Democrat-controlled Legislature. However, opponents led by Republican lawmakers successfully petitioned the law signed by Gov. Martin O’Malley to the ballot. It was the first of three successful petition drives that helped create an unusually long ballot this year in Maryland. Measures to allow same-sex marriage and the state’s congressional redistricting map also were successfully petitioned to the voters to decide.

Maryland voters have had a long time to consider the tuition measure, which was signed into law more than a year ago by the Democratic governor before it was put on hold by the successful petition drive.

“I gave quite a bit of thought to it, and I’ve listened to quite a few different opinions and, there again, the more you listen the more you scratch your head, but the people who believe it’s the right thing to do, I think, have the better argument in the long run,” said Dick Glass, a 69-year-old Annapolis resident. He voted early Thursday evening in favor of the question because he thinks it will make illegal immigrants more productive citizens.

But other voters who participated in early voting say they don’t believe someone in the country illegally should get a benefit that U.S. citizens in states outside Maryland cannot.

“They’re legally in this country, but they have to pay out-of-state rates,” said David Morsberger, 47, noting that someone from neighboring Pennsylvania would have to pay much higher rates to attend the University of Maryland, College Park, the state’s flagship university.

Other opponents say approval of the ballot question could turn Maryland into a sanctuary state for illegal immigrants at a time when some believe there are too many here already. Critics also say the measure is unfair to people who have made the effort to become U.S. citizens legally.

“I’ve had so many people tell me that: ‘I’m getting out of here. I feel like I’m in Little Havana,’” said Sue Jones, 58, who voted against the ballot question in Annapolis. “I heard that the other day.”

But supporters say they believe the required qualifications strongly put the students on the road to citizenship. They also note that the measure is geared to help people who were brought to the United States as children.

“I think people, especially students, who had no control over the actions of their parents but are in that situation that’s a way to assimilate them into the United States as citizens,” said Dave Dragics, 66, who said he voted for the ballot question Thursday evening.

Groups supporting immigrant rights have led a grassroots effort to support the measure, dating back to when the legislation was before the Maryland General Assembly last year to recent days. Clergy from a variety of denominations also have spoken out in favor of the ballot question.

While about a dozen other states currently allow illegal immigrants to pay in-state tuition, none of the measures in those states has been decided by voters. Supporters of the Maryland law note that there is a long list of requirements for students to qualify under the Maryland proposal.

Besides the high school and tax requirements, students also must state their intention to apply for permanent residency and register with the selective service, if they are required to do so. Students also would have to first complete 60 credit hours or graduate from a community college before becoming eligible to pay in-state tuition rates at a four-year public college or university.

The ballot question also extends the time in which honorably discharged veterans who are stationed in Maryland may qualify for in-state tuition rates from one to four years.