The state is the first in the nation to approve a Dream Act provision by popular vote. Proponents of the measure say it will enable millions of students who were brought to the United States as young children and educated in the Maryland school system to gain greater access to higher education and become productive and contributing members of the American economy. Opponents argue it will encourage more illegal immigration to the state.

“I don’t see a problem with it,” said Teresa Smith, 21, a student at Montgomery Community College. “If it’s not taking away from American students in Maryland or giving [undocumented immigrants] extra funding to attend these schools that other citizens are not being offered, then I say we pass the act.”

Reemberto Rodríguez, 55, Director of Silver Spring Regional Center, said  he was “very proud of the Maryland community” for supporting the ballot measure.

The state “version of the Dream Act” is named for the proposed federal legislation that would grant permanent residency to undocumented immigrants who came to the U.S. as minors, graduated from American high schools, completed two years of college or military service.

It would ultimately serve as a “lifeline to these students who are already working hard in our middle and high schools and living in our communities by granting them the temporary legal status that would allow them to pursue postsecondary education,” said Drew Gilpin Faust, president of Harvard University.

“A college education is often the key to unlocking opportunity,” he said. “And all students, regardless of where they were born or their parents were born — [they] deserve the chance to have a bright future and be a productive member of society.”

“It just makes good sense for our citizens,” Morgan State University President Dr. David Wilson said in an earlier interview with Diverse. “Morgan has been voted among the best universities in the country for Hispanic students by a leading Hispanic publication, and one of the main reasons is that we provide a welcoming environment for our students. We work very hard to make a quality education affordable to everyone, and so we have long been supportive of the Dream Act.” 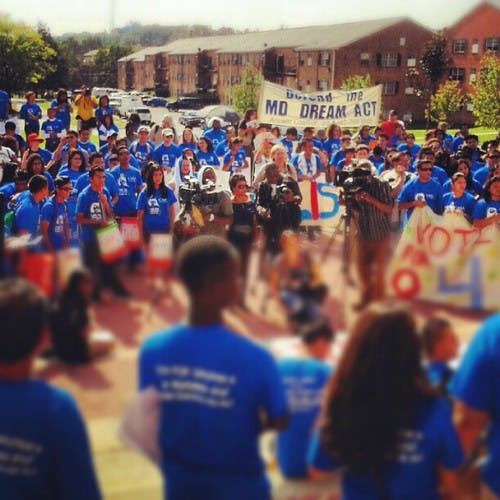 Students at the University of Maryland march in favor of the Dream Act.

To be eligible for in-state tuition under the Maryland  Dream Act undocumented students must have attended a Maryland high school for three years and obtained a high school diploma or GED.  They must also provide documentation showing that they or their parents or guardians filed income taxes during the three year period . Additionally, the students must demonstrate that they intend to apply for permanent residency. If the initial requirements are met, students qualify for in-state tuition at a two-year community college. After graduation from a community college (or completion of 60 credit hours), students then qualify for in-state tuition at four-year public institutions.

In addition to Maryland voters, the Dream Act has found many supporters among various, legislators, educators, organizations and individuals from across the country. One of those supporters is President Obama, who recently ordered that deportations of undocumented immigrants brought  to the U.S. as young children be deferred.

Although the president has been criticized for the lack of progress on reforming the U.S. immigration system, he has been praised in some quarters for his support of the Dream Act.

“What he [Obama] is doing for the Latino community is substantial,” Rodríguez said. “We are definitely proud of him. He captures the essence of what America is, was, and can be.”