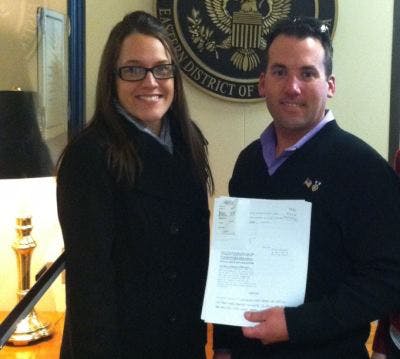 Hayleigh Perez and Jason Thigpen sued the University of North Carolina Board of Directors, claiming negligence and emotional distress as the result of a dispute about residency status for tuition.

The North Carolina based Student Veterans Advocacy group filed a lawsuit on Nov. 8 in Raleigh against the University of North Carolina Board of Directors for injunctive release, compensatory, and punitive damages under the violation of their 5th and 14th amendment rights which protect veterans and veterans suffering with post traumatic stress disorder.

This was after Thigpen, Perez, her husband, Sgt. 1st Class Jose Perez and a Change.Org representative met with Kevin Fitzgerald, Chief-Of-Staff to the UNC System President, to present the petition that included close to 147,000 signatures.

Fitzgerald was “very understanding and seemed to empathize with the issues,” Thigpen said, but because of “apparent unwillingness to even discuss a settlement,” additional steps had to be taken.

A spokesperson said that the Board of Directors had not been served with or seen a copy of the complaint so they would have no comment at this time.

Nearly 250,000 veterans and service members are each paying an average of $10,000 per academic year out-of-pocket while using the GI Bill to attend a public college or university because of the changes in their educational benefits regarding residency for tuition purposes, according to the Student Veterans Advocacy Group (SVAG).

A recent report by Thigpen claims that only 10 percent of schools in the University of North Carolina school system offered “adequate services, facilities, and resources.”

The report, titled “Analysis & Audit Of North Carolina’s UNC School System” stated that, as of August 2011, the 9/11 Veterans Educational Assistance Act of 2010 “detrimentally impacted thousands of veterans attending public colleges in North Carolina” resulting in “veterans with a financial burden of paying the difference between the in-state and out-of-state tuition rate.”

“Prior to this change, Veterans Affairs paid up to $17,500 in tuition per academic year, regardless of residency classification,” the report added.

Perez was one of the students affected by the bill. After an honorable discharge from the U.S. Army in September 2009, she decided to pursue her master’s degree. Perez and her husband, who is currently on active duty, were relocated on a temporary recruiting assignment to Texas but they continued to pay property taxes for the home they had purchased in North Carolina.

In the midst of moving back to North Carolina in November 2011, Perez applied to Pembroke and Fayetteville State. She was accepted to both colleges but was only considered an in-state resident at Fayetteville State although she presented the same documentation to prove in-state residency, which included a deed to her house, her voter registration information, North Carolina driver’s license, and her husband’s orders.

Pembroke still denied her appeal without explanation, according to Perez. After researching the subject matter, she came in contact with Thigpen at the SVAG and wanted to re-appeal with representation.

Perez was not only denied the opportunity to re-appeal with representation but also greeted with “hostility and aggression,” said Thigpen.

“The documentation she presented did not qualify her as an in-state resident at both the institution and state appeals level,” said Sandy Briscar, executive director of University Communications and Marketing at Pembroke, who handled all media inquiries on the matter. “Because Ms. Perez’s circumstances have changed and her husband is now stationed in North Carolina, she would be considered an in-state resident were she to re-apply to a UNC institution.”

Perez is currently attending a private college, Methodist University, in Fayetteville so attending Pembroke is no longer a priority. Instead, she aims to make things easier on other veterans in similar situations by creating awareness of discrimination and telling her story.

“To further drive that home, we are not accountable to any one entity, and our main goal is to make this right for all veterans,” said Perez, who now is vice president of social media at the SVAG. “There needs to be action; talk is cheap.”

Some state governments, which have authority of setting tuition and residency criteria for its schools, are working toward making transitioning easier for service members and their families. For instance, Maryland just passed the Dream Act which was on the ballot for the 2012 election and included a referendum that includes the veterans’ issue, mentioning that voting “for” the measure extends the time in which honorably discharged veterans may qualify for in-state tuition rates.