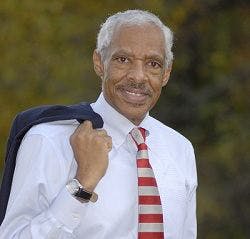 When Leonard Haynes III came to Washington in 1989 as an assistant secretary of education, the Southern University-trained historian found a national government marked by bipartisanship, collaboration and cooperation on a wide range of topics of importance to people of color in higher education.

For sure, institutions focused on serving people of color were not getting all the funds or programs they wanted from the federal government. Still, there was some desire for diverse perspectives to be heard when decisions were being made about how to distribute federal funds to the nation’s higher education community.

Today, the landscape and environment are “more partisan and less collaborative and cooperative,” says Haynes, who at 65, is marking 15 years of continuous service in Washington as an inside advocate for historically Black colleges and universities (HBCUs) and other institutions with histories of serving students of color.

More Washingtonians are asking questions about federal aid policies, once thought to be nearly sacred. The inquiry reflects the emergence of a new generation of lawmakers with no or few roots in HBCUs and other higher institutions that focus on serving students of color.

The lingering tough economy that produced less and less money for the federal government has impacted the thinking of those — in various administrations and on Capitol Hill — who decide how to spend it, Haynes says. Meanwhile, growing rifts between political parties have sharpened the rhetoric and debate over the age-old question of the role of the federal government in society.

“It’s a learning curve,” says Haynes, adding that today’s political climate has created new challenges for those, like him, whose advocacy is rooted in the nation’s history.

Signs abound, he says, “If you look around the landscape to [the fact that] the number of staunch advocates with a lineage has not expanded.” Haynes, senior director for institutional service in the Office of Post Secondary Education in the U.S. Department of Education, senses the impact of the changes every day.

For decades, HBCUs — his initial area of focus when he came to Washington — could count on federal lawmakers from their states and the growing ranks of Congressional Black Caucus (CBC) members with roots in the HBCU community to make sure these institutions were included when decisions were made by Congress and presidents from either political party on how to distribute federal tax dollars for higher education.

The historical ties have thinned, Haynes says, noting congressional redistricting after the 2000 and 2010 census has meant some CBC members no longer have HBCUs in their districts. That has translated into Capitol Hill and administration department staffers with little or no history with HBCUs and other institutions focused on serving people of color.

“The staffs are the ones who have to be educated, as they are relatively young,” and HBCUs are not the first thing on their minds, says Haynes. “HBCUs are not the only game in town,” he says, a fact that one need look no further than his job to understand. He is responsible for hundreds of millions of dollars for programs involving HBCUs, Hispanic-Serving Institutions (HSIs) and Tribal Colleges and Universities (TCUs) and Predominantly Black Institutions (PBIs).

To the increasingly crowded field of institutions seeking slices of the shrinking federal money pie, “You’ve got to be able to demonstrate what is your competitive value,” says Haynes. “An institution has to explain that. I can’t, especially when there are choices.”

To his point that hardly anything seems sacred anymore, Haynes cites increasing questions being asked about all kinds of funding for institutions established in an era of legalized racial segregation. Howard University, for example, rooted in post-Civil War efforts by the federal government to develop an institution to provide a quality higher education for Blacks, has for decades had a line item in the Department of Education budget. In recent years it has exceeded $200 million a year.

“There are some voices on the Hill asking how long should [Howard University’s] line item continue,” says Haynes. “That reflects people on both sides of the aisle raising questions about spending,” he says, noting gradual generational and racial disconnects that combine with tough fiscal times to foster such sentiments.

The questions come amid the rapid emergence of myriad institutions seeking the same students on which Howard and its peers once had a near-monopoly. Historically White and for-profit institutions are courting Blacks and other students of color more aggressively.

Haynes says he needs look no further than his alma mater, Southern University at Baton Rouge, to grasp the changing environment. In recent years, he says, historically White Louisiana State University (LSU) has proportionately enrolled more Black students than Southern, which has been experiencing an enrollment decline.

The turning tides in Washington need not be a death knell for HBCUs and similar institutions with a history of serving people of color seeking a higher education, Haynes says. For example, with 60 percent of the freshmen in HBCUs being first-generation college students, there is “a future” for these institutions, as the public still sees them as viable options. “They are nurturing, but they’ve got to be competitive,” Haynes says, despite never getting the funding their non-minority counterparts continue to get year after year.

Still, Haynes says HBCUs need to understand some potential facts as they ponder the next 10 years and take some actions sooner and on a more regular basis to enhance their standing and potential to persevere and grow in the future.

• They will continue to see “limited resources” coming from the government, Haynes says. That means they “can’t be all things to all people” and expect to continue meeting accrediting standards on the one hand and be competitive on the other.

• The idea of developing and implementing faculty retirement programs, instead of avoiding the reality until they see a wave of faculty retiring, will become imperative to recruiting and cultivating the next generation of talented academicians.

• They also need to immediately place more focus on their websites, as these new media vehicles for communication have emerged as main tools for federal Washingtonians who know nothing about an institution to quickly gather headlines.

“Make sure [the website] is always accurate,” says Haynes. He suggests every site have a link or something similar to a detailed explanation of the federal programs to which the institution is linked. Such readily available information helps demonstrate the universities’ ties to federal programs and supports their cases.

• Focus on stabilizing their leadership. Noting the increasing churn of HBCU presidents, Haynes says the turnover “hampers the ability of an institution to stay focused. If you keep changing leadership, the vision changes,” he says. “Too many of the people taking on these roles make the fatal mistake of thinking history begins when they show up. They have to sense an institution’s history,” he says.

Noting “there’s a whole rethinking of how you’re going to finance schools,” Haynes says HBCUs need to lean heavily on alumni to invest more and more in them, particularly as federal and state aid continues to decline. “HBCU alumni give a lot of advice but don’t give any money,” Haynes says. “Morris Brown, [the Atlanta university that recently went bankrupt and is liquidating its remaining assets], would still be in business if the alumni had stepped up,” he asserts.

For starters, Haynes says institutions could spark additional alumni and supporter financial giving with little steps like placing a surcharge on football game tickets, with those proceeds going into a scholarship fund endowment. Such add-ons can raise millions of dollars in just a few years, he says.

Haynes says actions like this by individual institutions are increasingly important for inside advocates like him to make their cases, as their jobs get tougher. “It’s going to demand more of us,” says Haynes. “We’ve just got to step up.”