Tribal Colleges Make An Effort To Return To Their Food Roots 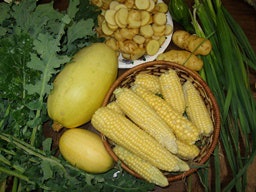 Tribal colleges have made a push to grow and serve their own foods in efforts to promote food sovereignty.

The airy structure, on the serene campus of the Institute for American Indian Art, is producing 6 pounds of lettuce per week for the school cafeteria, with a goal of 30 pounds by Christmas. Students are starting to distinguish the greenhouse lettuce from commercially-grown greens, says Reed, U.S. Department of Agriculture land grants manager for IAIA.

But Reed also recently used the structure, completed in August, to teach a course on greenhouse management to representatives of the nearby Santo Domingo, Cochiti and Santa Clara pueblos. Near the greenhouse, fruit trees and a community garden that grows lettuce, spinach, broccoli and cauliflower have also provided fare for the school cafeteria — as well as lessons in raising healthy food.

Reed, who serves 22 pueblos and tribes in New Mexico, says the need to eat healthy hit him personally, and he hopes others see it, too.

“My reality has changed,” says Reed, who was overweight but lost 100 pounds by changing his diet. “It’s important to realize how much bad food affects our society in so many different ways.”

Many of the 37 tribal colleges are making some sort of effort to promote “food sovereignty,” a term that has come to mean ensuring American Indians’ access to and control over affordable, high-quality food.

The colleges, a multitude of agencies and community groups and the tribes themselves are part of a movement to help American Indians eat healthier that has gathered momentum in recent years and “shows no sign of stopping,” according to Janie Hipp, senior advisor on tribal affairs for U.S. Agriculture Secretary Tom Vilsack.

At the tribal colleges, agriculture extension staffs have spread information about eating healthy and growing one’s own produce by partnering with tribes and groups in the community.

Many of the extension programs have community gardens and greenhouses. Some have held outdoor sessions on identifying, gathering and cooking wild greens, mushrooms and berries and revived traditional recipes that have fallen by the wayside.

They’re also growing and teaching about medicinal native plants such as nettles, valerian, peppermint and yarrow that can be used to treat ailments including rheumatism, colds, indigestion, colic and spider bites.

The health statistics are worrisome: About 30 percent of American Indian or Alaska native adults were found to be obese in a 2004-2008 survey by the Centers for Disease Control and Prevention. About 30 percent were overweight but not obese.

About 17.5 percent were diagnosed with diabetes and 14.7 percent with heart disease, much higher percentages than any other major ethnic group, according to the surveys. About 34.5 percent had been told they had high blood pressure.

Although the message to eat healthy has been harped upon for years, those trying to do something about it acknowledge it’s hard to change people’s eating habits.

“I think no matter what the rational mind says about eating healthy, if you’re stressed, you go back to your associations with comfort food — fry bread and mac and cheese,” says Steve Dahlberg, director of the extension office at the White Earth Tribal and Community College in Mahnomen, Minn. “These are the types of things people are addicted to.”

Dr. Robert Martin, president of IAIA, remembers when the school cafeteria switched to a healthier menu. “We met with the students,” says Martin, who is Cherokee. “They complained about the food. There was no fryer. They missed that.”

Experts say the poor eating habits are rooted in the way the tribes were treated by the government.

But many tribes were pushed from land where they had thrived to remote areas lacking arable soil, timber, water and game.

Reservations often don’t have well-stocked grocery stores nearby, so many people became used to getting their food from convenience stores and fast-food outlets.

About 270 tribes receive government food commodities, which go to low-income families. The food is mostly packaged, canned or frozen so it can tolerate a long shelf life.

The USDA is seeking ways to incorporate traditional foods into the commodities programs and tribes are choosing what they want to receive, says Hipp, a member of the Chickasaw Nation.

Tribal colleges’ efforts to promote food sovereignty vary, depending upon where they are, how well they are staffed and funded, and local interest. The creation of FALCON, the First Americans Land-grant Consortium, in 2005 gave the colleges a structure to share information about that and other efforts.

But the colleges are scattered across widely varying terrain, climates and cultures. They operate more than 75 campuses in 15 states including Alaska and one province in Canada.

Tribes can have very different traditions, even within the same part of a state. In order to succeed, efforts must come from the individual communities, says Elise Krohn, native foods educator and herbalist with Northwest Indian College, based in Bellingham, Wash.

“It’s better to build a program from the ground up with community feedback, rather than superimpose a program that does not fit people’s needs,” she says.

The college runs three community programs designed to help revitalize native food and medicine traditions. One, with the Muckleshoot tribe, offers classes, cultivates gardens and provides a platform for people to share their teachings. A project with the Lummi tribe gives families boxes of fresh, locally grown fruit and vegetables and holds workshops and cooking classes.

The college also is working with a local drug and alcohol abuse treatment center. Patients are taught how to grow, prepare and preserve native plants for food and medicine. The culturally-based program reports a low recidivism rate.

In western North Dakota, Fort Berthold Community College established the Land Lab on 15 acres off campus. The program grows corn and potatoes that are harvested in the fall and delivered to tribal elders. Thirty-two garden plots are offered to locals who want to grow their own fruit and vegetables.

But Hipp says the ultimate answer is for more American Indians to become farmers and ranchers, producing food that would be available locally.

Making a living off the land is growing in appeal as the job market shrinks in other areas, he says. “It’s something that’s waking up a new generation,” says Morales, whose program has a community garden and a greenhouse. “Maybe it’s the passing of the torch.”

The Mandan, Hidatsa and Arikara tribes near Fort Berthold Community College have had a long and proud history of raising crops and preserving and storing them. But they were pushed onto land where it was tough to grow crops.

The state of North Dakota is in the midst of an oil boom, and many people are working on oil rigs to support their farms and ranches.

For many families, what they eat boils down to cost. Healthy foods are seen as more expensive and less filling than bad foods. To a mother looking to feed her family fast, a $2 McDonald’s hamburger is hard to beat, Reed says.

“I hope we’re being realistic,” he says. “Is healthy food really an alternative? We must make it affordable.”