After a mere two months in the position, Alabama State University president Joseph Silver was placed on paid administrative leave this week, sparking protests by students who are demanding a state investigation into the reasons for the abrupt action.

According to John F. Knight Jr., Alabama State’s executive vice president and chief operating officer, a three-member executive committee of the Board of Trustees met on Nov. 26 to discuss Silver’s performance.

“The committee placed Dr. Silver on administrative leave with pay, pending further actions by the Board of Trustees,” Knight said adding that a full meeting of the board was scheduled for Nov. 29. The meeting has since been postponed at the request of Gov. Robert Bentley, but not yet rescheduled, according to a board source.

Knight said he wasn’t free to discuss the specific reasons the executive committee placed Silver on leave. “I can only say that there was some dissatisfaction among board members about his leadership,” Knight said. 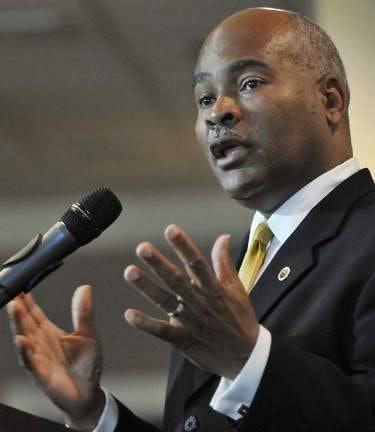 Dr. Joseph Silver has been placed on administrative leave after only a few months as Alabama State University’s president.

However, Silver says he came across “questionable and troubling” information about the university’s finances. He released a statement on Wednesday in which he said, “In reviewing the financials, contracts and other pertinent information of Alabama State, I discovered some items I considered questionable and troubling, at best, and a conflict of interest at the least. When I asked for clarifications, I did not get answers. When I asked for supporting data, the data was withheld.”

Silver added,” I was placed on administrative leave because I raised a few probing questions and I refused to go along to get along. That is not my operating style.”

Knight said he was not aware of improprieties or irregularities. “He needs to say what he is talking about instead of making a lot of vague statements.”

The announcement that Silver had been placed on leave led to a  series of a rallies and demonstrations by students expressing support for the popular president and demanding more information from the board.

Sharon Robinson, a 1973 graduate of the university, said the disruptions have come at a time when alumni are taking pride in the progress the institution has made. “Everybody has been talking about the new stadium and how successful homecoming was. It was sold out and all the hotels were filled. And now this …,” Robinson said.

On Sept. 17, Silver began a four-year contract earning $325,000 a year, according to university reports.

Knight said Thursday’s Board of Trustees meeting was hastily called specifically to address the issue of Silver’s status.

Meanwhile, Silver made public statements indicating that he had fired Knight, who says he is now handling “the day-to-day operations of the university, at the board’s request.”

Knight said, “I didn’t receive any letter of termination from him, but I did see that he sent me a text message Monday at 5:45 p.m., saying I had been terminated. That occurred while the [executive committee] meeting was taking place,” Knight said.