And Terri Parton, president of Wichita and Affiliated Tribes, says that makes her both a treasure and an imperiled, cultural linchpin.

“We are trying currently to get as much information out of her as we can. Once she’s gone …” says Parton, also the tribes’ liaison to the Breath of Life Institute, an offshoot of the quasi-federal Endangered Language Fund.

“If we lose languages, especially at the rate we are losing them now … we lose the definition of what it means to be human,” says Dr. Mary Linn, a University of Oklahoma linguist who is co-coordinator of the Oklahoma Breath of Life workshops and archival efforts aimed at nine tribes, including the Wichita.

“Every single language is a huge library,” she added. “And once that disappears, we cannot really get it back.”

Developing a coterie of community-based American Indians who are restoring, recording and inputting tribal languages into a publicly accessible online database is a broad aim of the project focusing on Oklahoma, which has 39 officially recognized tribes. In addition to Wichita, the participants include the Alabama, Apache, Shawnee and Natchez Indians. As another example, six of the 10,000 Natchez in Oklahoma are fluent in their tribal language.

The aimed-for language revival in Oklahoma, which is funded by the National Science Foundation and National Geographic’s Enduring Voices Project, also draws recordings and other documents collected by linguists, beginning roughly in the mid-20th Century. For some of the Oklahoma languages, however, no documentation whatsoever has been discovered.

And while a database is central to Breath of Life, the project has other yields. For example, a group of Alabamas, who, in Oklahoma, are officially associated with the Creeks, published a book detailing the Alabama alphabet.

“We created something for them to take home that they could use, either to go through it with their grandkids or nieces and nephews or show their friends what they worked on all week,” says Lori McLain Pierce, a University of Texas Arlington linguistics doctoral student and Breath of Life assistant.

“Historically, Native American groups have not been treated well by our government and other entities. That’s what part of this is about. It’s an attempt, for them, to take back some of that ownership. It’s empowerment,” she says.

Linguists and historians partly link the language loss to compulsory efforts to keep American Indians from communicating in their tribal tongues. Beginning in the late 1800s, the federal government ordered hundreds of thousands of American Indian children into White-run boarding schools where they were forbidden to speak anything other than English and were indoctrinated in Euro-American ways. That practice began declining in the 1970s, largely due to 1975’s Indian Self-Determination and Education Assistance Act.

“Then,” she adds, “after the exhaustion of being at the bottom [socially and economically] … after World War II, in some families, there was the rightful belief that English was access to economic development. Since the U.S. [was largely] a monolingual society, there was no overt knowledge that you could be bilingual … back then.”

“There are studies that show there is significant, [positive] educational impact for underrepresented groups when their educational experience includes a component of their heritage language,” she says. “One of our goals — in a social justice context — is to … allow Native American children to express their traditions, their heritage in the same setting where there are other students.”

Engaging youth is crucial, but also a trickier aspect of this endeavor.

“When you teach children words or sentences, if they can’t go home and use the language, some things stick with them but a lot of it doesn’t,” says Wichita cultural program planner Gary McAdams, a former Wichita tribal president and the person who has been documenting 85-year-old Doris McLemore’s fluency in that language.

In November, McAdams is slated to launch a weekly gathering for families interested in learning Wichita, and he hopes that will raise the prospects that Wichita becomes more of a spoken language.

“Even I can speak some words,” says current Wichita President Parton, who ran a Sunday afternoon Wichita language program for children from 2006 through 2009. She also notes the difficulty of retaining a language not in daily circulation. “I can recognize some things. But without being able to speak it every day, it’s hard to retain that information.”

“You don’t have a whole lot of kids who are trying to learn the language,” says Michael Darrow, a historian for the Fort Sill Apache and a Breath of Life Oklahoma community partner. “And we don’t have a lot of opportunities to present the information to them. I generally tell them that it’s something really special that very few people know … sort of like talking in a secret language.”

Language classes previously organized by Darrow, who has been documenting his mother’s Chiricahua Apache language since the late 1970s, were relatively poorly attended, and those few attendees mainly were older American Indians. “We’re hoping to develop the tools, the means and techniques and such that will better allow us to convey what information we have to a younger generation,” Darrow says. “It’s great that [elders] want to learn. But teaching those who are my age or older does not keep the language going for another generation.”

There have been other, perhaps subtler, challenges to surmount, the university linguists say.

“Sometimes, there is shame,” Linn says. “I have heard some elders say they were amazed to hear Spanish spoken in Walmart, and they wondered why they weren’t also speaking their language.”

“Ever since I’ve had a memory, I’ve spoken Wichita,” says McLemore, who runs a concession stand at Wichita headquarters part-time. Reared by her grandparents, Wichita was the only language her grandmother spoke, she says.

She speaks Wichita daily, including at tribal events where she is asked to offer the invocation. “When I pray, I pray in the language. I am called on because I’m the last one left who speaks Wichita … The work I’m doing with Gary is important … So that I can leave the language behind, and so that people will be hearing my voice long after I’m gone.”

And that, researchers say, is the point of it all.

“These languages can be renewed,” Linn says. “They can have speakers again, but it will take a lot of work. The new speakers will not necessarily be fluent speakers, speaking without a broken line. Nevertheless, [the preservation efforts] do give you a kind of hope.” 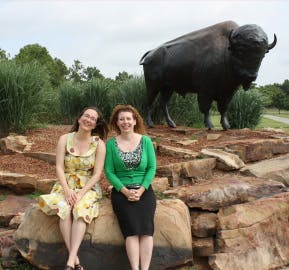 Mary Linn and Colleen Fitzgerald are co-coordinators of Breath of Life.
Read Next