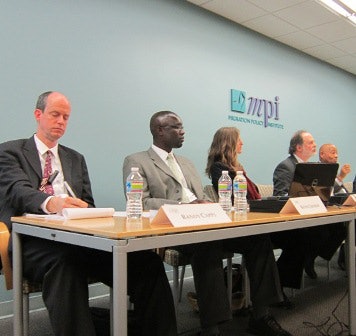 The panel is part of an effort to assess the well-being of children of Black immigrants and to compare them to other first-generation immigrant children.

WASHINGTON — With the aim of enriching immigration policy discussions and policy development, a Washington-based think tank convened a group of noted scholars and research analysts late last week to launch a book that documents the social, economic and health status of Black immigrant children in the U.S.

The publishing of Young Children of Black Immigrants in America: Changing Flows, Changing Faces by the Migration Policy Institute (MPI) represents an effort to bring attention to a cohort of children whom scholars and policy have overlooked, according to MPI officials.

“We think the book is useful because it brings together a wide range of disciplines all the way from education to economics to anthropology. It taps a wide range of data sources from the usual suspects like the American Community Survey to less usual suspects,” said Michael Fix, book co-editor and MPI senior vice president, during a book launch panel discussion.

Fix explained that the book grew out of concern in recent years that, while research about Latino and Asian immigrant children “was growing rapidly,” the scholarship on the children of Black immigrants was a “field that still remained largely unexamined.”

Presenting a demographic profile of Black immigrant families, Dr. Kevin Thomas, an assistant professor of sociology, demography and African studies at Pennsylvania State University, noted in his talk a number of characteristics defining the family conditions of Black immigrant children. Thomas is one of several book chapter authors.

Capps noted that the “variety of citizenship and legal statuses that immigrant parents have, varieties of levels of formal education, socioeconomic status and English language ability” accounted for a wide of diversity among Black immigrant families.

“In general, I think you can say that Black immigrants have strong protective factors as parents, particular those from Africa,” he said. “But when you start disaggregating into smaller groups, there are concerns.”

Capps noted the populations encountering the most difficult socioeconomic challenges as Black immigrant parents are “the non-English-speaking Caribbean populations, the largest being from the Dominican Republic and especially Haiti” and “a series of smaller African refugee populations,” including those from the Sudan and Somalia.

Others participating in the MPI book launch were Dr. Dylan Conger, an associate professor of public policy at The George Washington University; Dr. Gerald D. Jaynes, professor of economics and African American Studies at Yale University; and Ajay Chaudry, the Deputy Assistant Secretary for Human Services at the U.S. Department of Health and Human Services.

“The authors and editors made the point that there is almost no research and literature out there for people to look at on this population in any detail whereas we have had this huge focus on Latinos and to a lesser extent Asian [immigrants]. I think (the book) is an important step,” Jaynes told Diverse.