A controversial China-affiliated program has spread to campuses across the U.S., with many university leaders stressing the positives and saying they don’t want to miss out on the benefits.

The Confucius Institute, whose stated mission is to promote understanding of Chinese language and culture, has been attacked as a propaganda tool that could lead to self-censorship by universities fearful of jeopardizing China’s generosity.

In interviews, CI directors have denied that the program forbids such sensitive topics as Taiwan, Tibet and dissidents, although a couple of disturbing-sounding incidents have been reported at non-U.S. universities. Some university officials say they can use the program, which provides funding and partners them with universities in China, to achieve their own goals. They say it can be a boon as universities prepare students for a world in which China is a dominant player, but must accomplish that with ever-tighter budgets. Some U.S. universities are exploring collaborating with CI partners in fields such as food science and water issues.

Dr. Nancy Romig, associate director of Michigan State University’s CI program, one of the oldest and most well-established, says growing and developing a CI program is a long process. “You have to be patient and think outside of the box,” she says.

“There has never been any case whatsoever of Hanban [the agency operating the Confucius Institute] trying to censor or control what we’re saying,” she says. “There’s nothing like ‘You need to do this, you need to do that.’” Hanban, or the Office of Chinese Language Council International, which is affiliated with China’s Ministry of Education, launched the Confucius Institute program in 2004.

The CI program — named after the ancient Chinese philosopher whose ideas were discredited, then revived by the Chinese government — began to surge after President Hu Jintao said in 2007 that China must use its culture to exert “soft power.”

The program’s stated aim is to promote understanding of China’s culture and Mandarin, the official language, and contribute to “the development of multiculturalism and the building of a harmonious world.”

CIs are now established at more than 300 campuses around the world, including about 80 in the U.S.  Estimates of China’s spending on them run into the billions of dollars. Hanban typically spends about six figures annually per institution for textbooks and other materials and the travel and living expenses of Mandarin language teachers, administrators and others who come from China to team up with American CI staff members. Universities are said to supply relatively modest funds in return, including in-kind contributions. In the U.S., the program is overwhelmingly based at public universities. But it also has moved into several private institutions, including some, such as Stanford University and the University of Chicago, that have seen protests over bringing it on campus. In many cases, CI classes in language and culture are only offered for the general public or as extras in K-12 schools — not for credit.

Still, universities with a sense of urgency about teaching Mandarin have been able to enlist the CI’s help in other ways. Michigan State, which has developed an online role-playing game, online textbook for high-schoolers and a language and culture summer camp, is tackling another ambitious project with the help of CI funds. The school is developing a Chinese language curriculum that would be applicable to K-12 classrooms across the country, Romig says.

Meanwhile, the Community College of Denver plans to revamp its CI program to concentrate on producing people qualified to teach language and culture in K-12. The college’s CI has offered general language and cultural programs since 1997, including classes in t’ai chi chuan and brush painting, but much of that may be dropped. In line with its shift in focus, the CI is switching its partner to East China Normal University, which grooms teachers.

But universities are also using their CIs to look beyond language and culture.

The University of California in Davis will use its CI to boost its longstanding partnership with Jiangnan University in Wuxi in the field of food and beverage science, according to Bill Lacy, vice provost for university outreach and international programs.

China is beginning to develop its wine industry, a key area of expertise at UC-Davis, Lacy says.

Xavier University of Louisiana, the first historically Black college to get a CI, plans to use it for pharmacology, one of the school’s main strengths and a rare focus for a CI program. The visual arts and music and languages will also be priorities. Xavier, a Catholic university, was approved for a CI earlier this year and will partner with Hebei University, which was founded by Jesuits in 1921 and is strong in the sciences. The school is the only comprehensive higher education institution in a province of 70 million people south of Beijing. Xavier officials envision their students learning about traditional Chinese medicine and musical instruments and Chinese students learning about jazz. They also want the school to become the first in the state to offer teacher certification in Mandarin. Xavier CI director Yu Jiang says the New Orleans community, including its Asian population, has rallied behind the program.

Like other officials at other universities, Dr. Loren Blanchard, Xavier’s senior vice president for academic affairs, says he doesn’t see CI as a way to promote propaganda. It’s a part of the school’s commitment to prepare students for the world, he says.

Ken Hammond, co-director of the CI at Mexico State University, says his nearly eight-year-old program has hosted conferences on potentially touchy subjects without any problem. Discussions have been held on Taiwan; Tibet; Xinjiang province, a site of unrest; China’s involvement in maquiladoras, foreign-owned factories in Mexico; and China’s activities in Africa, which elicited some very critical remarks, Hammond said.

“The second there’s any restraint on what we do, that’s it, I’m done,” he said.

“We’re in southern New Mexico, a poor part of the country,” he says. “We’re not flush with resources — but this must be done in an atmosphere of freedom.”

“Those aren’t controversial,” said Lamm, whose program began in 2007. “But if [students] wanted to learn about that [controversial topics], they’re free to ask or learn about it.”

Neither the world headquarters nor North American offices of Hanban responded to inquiries sent by email. In his new book, China in and Beyond the Headlines, China analyst Lionel Jensen cites two examples of CI programs “overreaching.” In Israel, a judge ruled that in 2008, an administrator at Tel Aviv University unfairly cancelled an art exhibit of Falun Gong, a spiritual group repressed by China, out of fear of losing CI money and support. In Sweden, accusations by staff members at the University of Stockholm that the CI spied for the Chinese embassy were found to be inconclusive, but led the school to change its program, according to Jensen. He says the notion of a foreign government having a presence at universities is disturbing.  Also, it’s unclear where China gets the funds for the Confucius Institute program, he says. While the program can be useful, he says, the cultural offerings seem shallow and the value of CI-brokered research collaborations has yet to surface.

Jim Cooney, vice provost for international affairs at Colorado State University, which is starting a CI, says the university examined the program very closely and feels comfortable with it. Its CI will partner with Hunan University in Changsha with a main focus on water and sustainability. 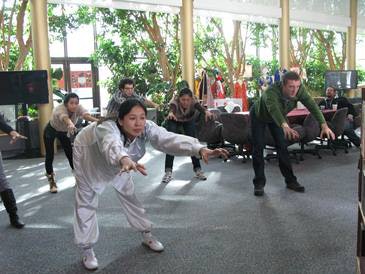 You Zhou teaches a Chinese stretching exercise at the Community College of Denver’s Confucius Institute.

“There’s no indication they [Hanban] are heavy-handed with the program,” he says.

“The university could always pull out, if need be,” he said. It’s not like we have our hands tied.”