Brockenbrough describes his research as the exploration of the “intersections of race, gender and sexuality in urban educational spaces.” Much of his work focuses on LGBT youth of color. He’s interested in complicating our notions about what those kids go through so that schools and community organizations are better able to support them.

According to Brockenbrough, schools tend to create a support space for students of color and a separate space for queer students. Each of these groups can fall short in terms of addressing the needs of students who identify with both. These students face unique challenges as they try to navigate their multiple identities, especially when they are put on the margins of spaces that would otherwise support them.

He also finds that some of the recent trends in education have troubling implications for queer students of color. Specifically, the push in urban areas for all-boy schools may make sense for the majority of that population, but not necessarily for boys who don’t behave in a traditionally masculine way. The boys who are considered “softer” (even if they are not gay) really struggle in all-boy schools. This is especially true because gay boys tend to ally themselves with girls, who are usually more sympathetic and easier for them to relate to.

Brockenbrough’s inspiration for his research stems from his time as a high school history teacher in the Bronx. His plan was to teach only for two years. He needed a break from college and “wanted to buy time.” But after a short while, he fell in love with teaching.

While he was working at Riverdale Country School, he got involved with an organization called GLISTEN, which does advocacy work against homophobia in schools. Being involved in social justice work as a teacher really shaped his perspective on that profession. He says, “It has shaped my sense of the risks that are involved in doing social justice work in K-12 schools, particularly around LGBT issues.”

When he was co-chair of the New York chapter of GLISTEN, Brockenbrough chose to come out to his principal and colleagues. He was teaching at an independent school and had the support of his principal, department chair and many colleagues. He knew he wasn’t at risk for losing his job, but not all teachers could say that. His work as a teacher in social justice around LGBT issues “helped [him] realize that some people pick bigger risks than others in doing this work.”

His days as a teacher significantly influenced his current work as a teacher mentor and professional development leader. He runs sessions for teachers on issues that LGBT youth face. These sessions allow him to raise issues that teachers may not be comfortable bringing up on their own. As a mentor, he helps K-12 teachers navigate issues around diversity and tolerance in the classroom. He says, “The big way that my teaching experience informs what I do is that I got the chance to be the teacher that spoke about and worked for social justice, particularly around race and around LGBT issues. So that allows me to see the need for that work and to understand the risks that are involved and to help teachers negotiate those risks.”

Brockenbrough is planning on taking a junior sabbatical year. During that time, he will be publishing research on queer teachers of color and an article about the challenges facing transgender youth of color. He notes that in schools, it’s not enough to create a Gay-Straight Alliance and think the work is done. There are divisions within groups of LGBT youth that need to be sorted out. In another piece, he’ll be looking at how to make culturally relevant pedagogy, which includes instruction that’s tailored to reflect the students’ cultural backgrounds, relevant for queer youth of color.

Of all the research he’s done and the accomplishments he’s had, Brockenbrough says he’s most proud of his days as a teacher. He “ended up being a fairly good teacher even though [he] wasn’t trained to be a teacher.” He now has students contacting him through social media and telling him about the positive impact he had on their lives.

He talks humbly of his experiences and how fortunate he has been to create opportunities for his students. “Ultimately,” he remarks, “education should be about creating opportunities for young people to grow and to realize who they are and what I’m most proud of is that I stumbled upon the ability to do that, even though I wasn’t planning on it.” 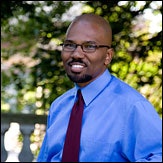 University of Rochester’s Ed Brockenbrough is balancing teaching courses on diversity and social justice with researching male teachers in urban schools and LGBT youth of color.
Read Next