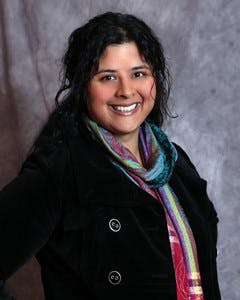 It is not always easy to merge two interests into one career, but Nisha Sajnani accomplished it. As a student at Concordia University in Edmonton, Canada, she enjoyed acting in campus and community productions. She also was interested in psychology. The melding of those two interests led her to double major in theater and psychology. Today she is an accomplished assistant professor and the coordinator of the drama therapy/psychodrama program at Lesley University in Massachusetts. Sajnani also serves as an adjunct professor of arts-based research in the drama therapy program at New York University.

“A drama therapist first assesses the needs of clients and then suggests treatment,” said Sajnani, who lives in Boston. Treatment often includes improvisational play, storytelling, role-play and performance. These techniques can provide clients with a means to identify concerns, express their feelings, deepen insight and strengthen their confidence. Drama therapy is becoming more known, but academic training programs are primarily in Great Britain, Canada, Europe and Israel. In the United States and Canada, the governing body is the North American Drama Therapy Association (NADTA). The organization establishes guidelines for the training and registration of drama therapists. Sajnani is the president of the NADTA.

“Drama therapy has been especially effective with children and adults who have experienced traumatic stress,” said Sajnani, who previously served as the director of the Drama Therapy and Community Health program at the Post Traumatic Stress Center in New Haven, Conn. Though not as well-known as traditional psychotherapy, drama therapy is becoming increasingly recognized as a non-threatening, effective approach to addressing a wide range of interpersonal and social concerns. Sajnani added. Drama therapists work in settings such as hospitals, prisons, schools and mental health centers but also create performances with community groups to challenge attitudes and generate conversations about social concerns such as racism, suicide, and violence against women.

Sajnani earned her master’s degree and a Ph.D in interdisciplinary studies from Concordia University in Montreal, one of three universities in North America that are accredited by the North American Drama Therapy Association. Sajnani’s doctoral dissertation was entitled “Permeable Boundaries: Towards a Critical Collaborative Performance Pedagogy.” She received the Dissertation Award from the Drama Therapy Fund.

As a young professional in Alberta, Canada, Sajnani also volunteered with social services departments and youth agencies before becoming a registered drama therapist. She worked with Mirror Theatre, an educational theater company that developed interactive performances, which gave high school students opportunities to practice confronting a bully or dealing with peer pressure. According to Sajnani, when people are able to rehearse solutions to their problems or watch others do the same, they learn skills they can use the rest of their lives.

Before assuming her position at Lesley, Sajnani directed an innovative school-based drama therapy program called Animating Learning by Integrating and Validating Experience (ALIVE). She and a team of drama therapists worked with public schools using improvisational play with children who had lived through frightening events such as the death of a parent, sexual abuse, physical abuse, being in a car accident, witnessing a shooting and other trauma. Through play, improvisation and acting out their feelings, students are able to communicate their fears and are better able to concentrate in the classroom, she said. Typically children regain their capacity to play and to trust others.

“Improvisation is a life skill,” she said. “Drama therapy gave me a way to share this skill with others in ways that help them respond to life’s situations with spontaneity, flexibility and authenticity.” She believes there is resurgence in promoting both learning and healing together. “We need to bring together mental health and education in ways that work,” she said.

“I have known Nisha for 10 years as her mentor, employer and colleague,” said David Johnson, associate clinical professor in the Department of Psychiatry at Yale University School of Medicine. He is also co-director of the Post Traumatic Stress Center in New Haven. “Nisha is constantly at work on herself and the world, for she is acutely aware of the injury that has occurred to both. Out of an authentic experience of personal suffering, an innate and sparkling intellect and enduring commitment to what is right, she has engaged in numerous creative and effective projects in applied theater, drama therapy and social advocacy in North America and around the world.”

Johnson said that Sajnani’s work gives voice to the silenced, challenges the established order that supports oppression and encourages human celebration through creativity, theater and play.

“Whether working in international venues or close to home, Nisha has attracted a following of like-minded people, with whom she selflessly shares her vision and the daily work,” he said.  “Refugees and immigrants in Canada, dispossessed students in New Haven public schools and traumatized youth and adults have benefited from Nisha’s passionate and unrelenting stance: to change the world by identifying and then altering the mechanisms of oppression,” he said.

She is the co-author of the forthcoming book, Trauma-Informed Drama Therapy: Transforming Clinics, Classrooms, and Communities.

Sajnani has developed numerous university courses, including Drama Therapy and Social Change for Concordia University and Theatre and Change for Yale University.