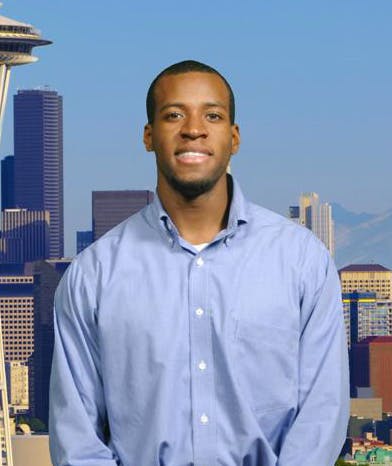 As an undergraduate biology major at Howard University, Dr. Thomas Hardy was afraid of professors; it wasn’t until he had the opportunity to work closely with one on a project that the barrier came down.

“When I got a chance to know him on a more personal level and see what his day-to-day activities involved and the real impact that he was able to have on students’ lives, I would say, that is the point in my sophomore year where I decided that was the career path that I would like to pursue,” says Hardy, now 31 and an assistant professor in the Natural Sciences Department at Virginia Union University.

During his undergraduate years, Hardy took part in the Washington Baltimore Hampton Roads — Louis Stokes Alliance for Minority Participation initiative, which helped prepare him to become a Bridge in the Doctoral Fellowship Program.

“He is an ideal scientist in that he demonstrates initiative, utilizes innovative methods and uses his imagination to advance to the next stage,” says Dr. Clarence Lee, the director of the Center for Preprofessional Education at Howard, who served on his dissertation committee. “As a result of our weekly meetings, Dr. Hardy and I formed a tight bond.”

From discussing academia to various aspects of life, Hardy says, Lee and another mentor at Howard, the now retired Dr. Raymond Peterson, truly shepherded him along in his career.

“Those two individuals have had an enormous impact on my life, and they have just helped guide me and helped me to make good decisions,” he says.

This is just one reason he likes to be so engaged with his students. Working at a primarily teaching institution, Hardy focuses on his students, but adds an undergraduate research component to his work. For example, he is now managing a project with a student on environmental and atmospheric catalysts for breathing problems in collaboration with the Richmond Ambulance Authority and restoring the campus greenhouse with a group of undergrads. Dominion Virginia Power has given Hardy $40,000 for the greenhouse project, which he hopes to have completed by the summer of 2013.

“We put in a lot of time, effort and work into our undergraduate research projects,” he says, noting that this is the most rewarding part of the job. “It’s really nice to see the transformation that the students make from the beginning of the project, where they are just really interested, and they want to dig deeper into the question and learn as much as they can to that end point — well, really not the end, but to the presentation … where they have the opportunity to talk about the work that they have done.”

At VUU, Hardy credits a few other coaches, Provost Franklin Evans and Dr. Gerard McShepard, for teaching him the ropes at the school and how to talk to students.

“I didn’t understand the importance of mentorship until actually getting my feet wet and getting involved in working in that community. In addition to keeping me motivated, they have also shaped the way I think about tackling problems. There are so many different responsibilities in academia, and they all require different skills,” says Hardy, who serves as the co-chair of the school’s Environmental Sustainability Committee and will be up for tenure next year. While he’s received advice on how to prepare a competitive case for tenure, Hardy notes that always having an open mind and listening to other’s ideas has been key in navigating academia. As part of the committee, he’s developing a list of best practices to mitigate the school’s carbon footprint and approaches to engage more students in the environment.

“In this capacity, he brings constituents from the university and community together to forward the mission of making the campus environmentally sound,” says Lee. Though VUU is a teaching institution, Dr. Hardy has managed to also show fortitude in service and scholarship participation.”

Indeed, the teaching and community strengths of the school are exactly what Hardy enjoys, as he says of students, “They have a lot to give as well as to gain.”