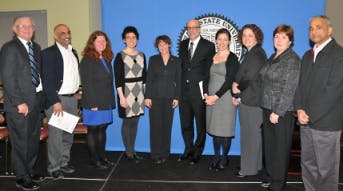 DSU and UD researchers will focus on neuroscience.

By manipulating and studying the behavior of rats and worms, researchers at two Delaware universities hope to learn more about the brains of human babies.

The research projects are just two of several that will be supported through a new five-year, $10.5 million federal grant that enables brain researchers to establish a new Delaware Center for Neuroscience Research on the campus of Delaware State University.

The Dover, Del. HBCU, which enrolls nearly 4,200 students, will serve as the lead institution in the joint project with the University of Delaware.

The new center will not be a physical place per se, but rather a “virtual center” that fosters collaboration among nine researchers from the two Delaware institutions of higher learning, a project official says.

Securing the grant was an arduous task, according to Dr. Melissa Harrington, the principal investigator of the research grant and director of the center.

The first time DSU submitted a 400-page application in 2009 to get COBRE funding to create the center, NIH rejected it.

DSU tried again in 2011, and still it was a no-go, although the feedback was more encouraging the second time around, Harrington says.

“The reviewers liked our center proposal and they liked the science we were proposing,” Harrington recalls. “But they thought that our institution was too small to make a success of such a big grant.”

A twist of fate occurred when NIH officials paid an unexpected visit to the campus in September 2011.

“When they visited DSU’s campus and talked to the faculty and students and saw all that we have going on here, that convinced them that if they funded our proposal, it would be successful,” Harrington says, explaining that it was DSU’s great facilities and high caliber graduate students that made an impression.

“In addition to being an inter-institutional center, we are also excited that it will also be interdisciplinary,” Williams says, noting that the project will involve faculty researchers in biology, psychology and mechanical engineering.

Indeed, Harrington says one of the major benefits of the new center will be how it will encourage researchers from different backgrounds to exchange ideas and gain insights into each other’s work in order to take their research to new levels.

“Because biomedical science has become so technically demanding now, the day when scientists could work on their own are pretty much gone,” Harrington says. “In order to make any significant advances on a problem, you have to bring a lot of experiments together.”

The NIH grant was secured in late September but formally announced in late November with a congressional delegation.

The lawmakers hailed the center as a boon to Delaware’s economy.

“I am excited about the possibilities to come out of this project — from new discoveries to job creation — that will happen here in the first state,” U.S. Sen. Tom Carper (D-Del.) said at a press conference for the grant award. He says the grant would help “jump-start neuroscience research in Delaware” and create opportunities for leaders in neuroscience to come to the state to further their research.

The projects being supported through the NIH grant include those that range from one being led by a DSU biology professor who is using “C. elegans” — a worm — to understand the molecular basis of learning and memory, to a UD psychology professor who is studying the effects of “early-life adversity” on the genetic makeup of rats.

Another project will use lab rats to learn more about how to reduce the damage caused by fetal alcohol syndrome.

The hope is to better understand things such as how humans learn during the early stages of development or how negative environments affect children.

Beyond supporting nine researchers from DSU and UD, the grant will be used to employ lab assistants and students and buy equipment and supplies for research projects.

It will also enable DSU to renovate an unused greenhouse into a facility to house laboratory mice.

The grant will also be used for DSU to recruit three new research faculty members — one in psychology and two in biology.

Additionally, the money will be used to bring in prominent neuroscientists from throughout the country and around the world to present on their research, Harrington says.

“It’s going to allow everybody in the center to be exposed to cutting-edge research,” she says.