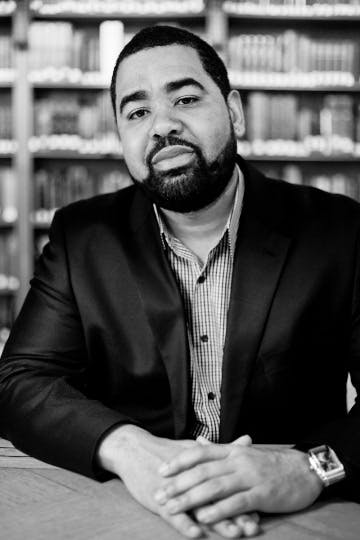 When Dr. Richard D. Benson II talks about education, he quotes Malcolm X, saying “Education is an important element in the struggle for human rights. It is the means to help our children and our people rediscover their identity and thereby increase their self-respect. Education is our passport to the future, for tomorrow belongs only to the people who prepare for it today.”

Benson, 37, is currently an assistant professor and associate chair of the education studies program at Spelman College in Atlanta. He said it was his mother’s influence that has made such a large impact on his career.

“My mother’s thing was school. … It was not uncommon for an individual to take 3 to 4 years off to work and save for college with the intent to enroll at a later time and that is what my mother did.”

It is this perseverance towards education that set a remarkable example and a proven attainable goal of higher education for her son. Benson also credits his grandparents Rose and Carl Carpenter, Dr. Anderson Thompson, Dr. Conrad Worrill, Bob Brown and Sammie Eames as career mentors.

In school, Benson was not a straight “A” student, but he excelled in courses that were geared towards reading comprehension and analysis. He recalls early on having a passion for books on civil rights leaders such as Dr. Martin Luther King Jr. and Malcolm X. When it was time to choose a college major, Benson said sociology was a natural fit for him.

“I was able to relate sociology to the ways of life,” he said.  He later decided to add a second major, political science.

A native of Chicago, he earned a dual bachelor’s degree in sociology and political science from Saint Xavier University, a master’s in inner city education studies from Northeastern Illinois University and a M.Ed. in instructional leadership, educational studies from the University of Illinois-Chicago.  In 2010, he successfully completed the pursuit of his Ph.D. in educational policy studies, specializing in the history of education from the University of Illinois at Urbana Champaign.

When questioned on the biggest hurdles for minorities in obtaining an education, Benson said that many minority students may not have access to pertinent information, depending on where they attend high school. He also recognizes financial hurdles minority students face.

“Financing is definitely an issue, because young people are under the impression that they will be unable to secure a loan when, in fact, there are scholarships available that they may be eligible for. What I have seen across the board, be it grade school, junior college or undergrad, is that there will definitely be a gap with respect to information if our young people are not made aware of every possible opportunity that they can take advantage of.”

“The United States is probably the only country where school is mandatory but learning is optional.” Benson says. “[No Child Left Behind] created so much of an emphasis on assessments, that the education system becomes even more of a training system devoid of instruction that teaches young people how to think critically. … Teachers must return to educational climates in which they are able to really see the student holistically.”

In Fall 2013, Benson will release a book entitled Fighting for Our Place in the Sun: Malcolm X as Educational Pedagogy and the Radicalization of the Black Student Movement 1960-1973, in which he hopes to paint a picture of a Malcolm X who is much more than just a black power figure head, symbol and muse for radicalization.

“The aspect that I hope to provide to readers who are historians, students of political science, students of education especially, students of Africana, students of Black studies or for those who are not connected to the academy; my biggest hope is to present Malcolm as a teacher and for all that he was able to do with respect to those that he motivated even up until the contemporary time of 2012 is to provide instruction,” he said. “One major example of that is Malcolm establishing a minister’s training class when he was with the Nation of Islam and one of the ministers who was actually under his tutelage for about 8 to 9 years was Louis Walcott who is referred to today as Minister Louis Farrakhan.”

One of the biggest things Benson and his team continue to emphasize is the fact that teachers in schools cannot really begin to understand the culture of a particular school until they actually become immersed in the community in which the students live. Social justice in education is repairing the breach that exists in many cases between the spaces of higher education and the community.

“It’s unfortunate that over the course of the years the community is seen as a ‘laboratory,’ so to speak, that you refer to when information is needed and once you’re done with research and investigations, you go back to the safe haven of that institutional space of which you came,” Benson said. “Rarely is something given back, and that is why I strive to pass the message along to my students too — find out what the gaps are in these communities so that you will be able to benefit the community and yourself as a student, teacher and researcher.”

“Moving away from one-sided opportunism and more toward a selfless approach to research and constituency building … will allow you to nurture relationships and sustain communication with individuals who can not only provide you with assistance, but also allow you — as the student, teacher, researcher — to advocate for the needs of those community spaces if you’re ever needed,” he added.

Benson said that the best advice he had ever received regarding his career as a teacher came from a former teacher. “I can hear her voice, I can hear Ms. Eames as though it was yesterday, saying to me ‘Benson listen, there’s God and then there are teachers… Teaching is a lifestyle!’”