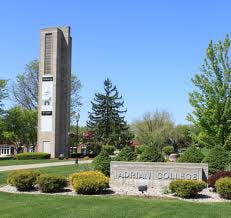 Adrian College turned to sports and other extracurricular activities to continue to attract students.

ADRIAN, Mich. — They’re the places you think of when you think of “college” leafy campuses, small classes, small towns. Liberal arts colleges are where students ponder life’s big questions, and learn to think en route to successful careers and richer lives, if not always to the best-paying first jobs.

But today’s increasingly career-focused students mostly aren’t buying the idea that a liberal arts education is good value, and many small liberal arts colleges are struggling. The survivors are shedding their liberal arts identity, if not the label. A study published earlier this year found that of 212 such institutions identified in 1990, only 130 still meet the criteria of a “true liberal arts college.” Most that fell off the list remained in business, but had shifted toward a pre-professional curriculum.

These distinctively American institutions educating at most 2 percent of college students but punching far above their weight in accomplished graduates can’t turn back the clock.

But schools like Adrian College, 75 miles southwest of Detroit and back from a recent near-death experience, offer something of a playbook.

First, get students in the door by offering what they do want, namely sports and extracurricular opportunities that might elude them at bigger schools. Offer vocational subjects like business, criminal justice and exercise science that students and parents think rightly or wrongly will lead to better jobs.

Then, once they’re enrolled, look for other ways to sprinkle the liberal arts magic these colleges still believe in, even if it requires a growing stretch to call yourself a liberal arts college.

But he’s also a realist.

“I say this with regret,” said Docking, an ethicist by training. But “you really take your life into your own hands thinking that a pure liberal arts degree is going to be attractive enough to enough 18-year-olds that you fill your freshman classes.”

In ancient Greece, liberal arts were the subjects that men free from work were at leisure to pursue. Today, the squishy definition still includes subjects that don’t prepare for a particular job (but can be useful for many). English, history, philosophy, and other arts and sciences are the traditional mainstays. But these days, some prefer a more, well, liberal definition that’s more about teaching style than subject matter.

“I refer to it as learning on a human scale,” said William Spellman, a University of North Carolina-Asheville historian who directs a group of 27 public liberal arts colleges. “It’s about small classes, access to faculty, the old tutorial model of being connected with somebody who’s not interested only in their disciplinary area but culture broadly defined.”

Does it work? It’s true that research tying college majors to salaries can make the generic liberal arts degrees look unappealing. But technical training can become obsolete, and students are likely to change careers several times. These schools argue you’re better off, both in life and work, simply learning to think.

Research does point to broader benefits of studying liberal arts in small settings, in areas like leadership, lifelong learning and civic engagement. Liberal arts colleges are proven launching pads to the top of business, government and academia (graduating 12 U.S. presidents, six chief justices and 12 of 53 Nobel laureates over a recent decade who attended American colleges, by one researcher’s count). Foreign delegations often visit to observe, and big U.S. universities are trying to recreate mini-liberal arts colleges within their campuses.

But outside a secure tier of elites with 10-figure endowments the Swarthmores, Amhersts, Wellesleys of the world many schools are in trouble. The liberal arts still account for about one-third of bachelor’s degrees, but the experience of getting one in these small settings is increasingly atypical. Definitions vary, but liberal arts colleges today probably account for between 100,000 and 300,000 of the country’s roughly 17 million undergraduates. There are more students at the University of Phoenix, alone.

These schools “are all getting to around $40,000 a year, in some cases $50,000, and students and their families are just saying ‘we can’t do it,’” Docking said. Small classes make these schools among them most expensive places in higher education, though they often offer discounts to fill seats (Adrian’s list price is $38,602, including room and board, but the average student pays $19,000).

Other pressures are geographic and generational. Many liberal arts colleges are clustered in the Northeast and Midwest, in towns like Adrian, founded by optimistic 18th- and 19th-century settlers who started colleges practically as soon as they arrived. But where the country is growing now is the South and West, where the private college tradition isn’t as deep.

Meanwhile, students these days expect the climbing walls and high-end dorms that smaller, poorer schools can’t afford. And a growing proportion of college students are the first generation in their family to attend. They’ve proved a tougher sell on the idea they can afford to spend four years of college “exploring.” In UCLA’s massive national survey of college freshman, “getting a better job” recently surpassed “learning about things that interest me” as the top reason for going to college. The percentage calling job preparation a very important reason rose to 86 percent, up from 70 percent in 2006, before the economy tanked.

Politicians have reinforced the message. Florida Republican Gov. Rick Scott recently proposed public colleges charge more for degrees in subjects like anthropology that he said were less economically valuable to the state than science and engineering (though in fact, those subjects usually cost much more to teach).

So, with varying reluctance, colleges have adjusted. In his 2011 book “Liberal Arts at the Brink,” former Beloit College president Victor Ferrall calculated that in 1986-87, just 30 of 225 liberal arts colleges awarded 30 percent or more of their degrees in vocational subjects. By 2007-2008, 118 did so. Even at a consortium called the Annapolis Group, comprised of the supposedly purest liberal arts colleges, the percentage of vocational degrees jumped from 6 percent to 17 percent.

“What’s new in the past few years,” said Richard Ekman, president of the Council of Independent Colleges, “is people are beginning to wonder in the places that have remained liberal arts colleges whether that’s enough.” Schools like Adrian that had already shifted to a more vocational approach “are asking whether the balance is right, whether they need to tip more to the professional side.”

Adrian was weed-strewn, demoralized and down to its last 840 students when Docking arrived in 2005.

“We borrowed 30 million bucks and said, ‘if this doesn’t work out, we’re done,’” he recalled.

First, Docking built up facilities and added teams, notably in sports like hockey and lacrosse that tilt toward more affluent students. No niche market was too small: Adrian started one of the country’s only synchronized skating teams. At the nearby University of Michigan, almost nobody walks onto the football team or even the marching band, but you can at Adrian. And everybody recruits. Docking’s band director has to bring in 20 kids a year, the symphony director 10. He has fired coaches who don’t meet their quotas.

(This year, about 700 of Adrian’s 1,756 students play varsity sports, more than 40 percent. At the University of Michigan, there are 881 student-athletes or 3 percent of the 27,500 undergraduates.)

Docking worried Adrian would become a “jock factory,” and the number of students wearing team gear on campus is striking. But, he said: “They come in as hockey players, and they leave as chemists and journalists and business leaders.” Michael Allen, a longtime theater professor, says the athletics culture has turned out better than he feared, saying most athletes who persist are (or get) serious academically.

Pre-professional programs weren’t new to Adrian, but it’s recently added athletic training and sports management. The two most popular majors are business and exercise science. So is Adrian still a “liberal arts college?” Some would scoff, but Docking say yes. He notes the top minors include chemistry, English and religion/philosophy. He talks up “institutes” on campus devoted to ethics, study abroad and other areas that try to inject liberal arts-style learning around even the pre-professional curriculum. That curriculum still includes liberal arts distribution requirements majors, and he insists liberal arts skills can be taught in other types of classes, and even through extra-curriculars.

Vicki Baker, a professor at nearby Albion College, who co-authored the recent study tracking the 39 percent decline in liberal arts colleges since 1990, also thinks these colleges can retain their value even as they evolve. Her Albion business classes include debates, presentations and other teaching techniques that were impossible when she taught 400 at Penn State.

Liberal arts colleges “appeal to a certain kind of student who really flourishes in that environment,” and who might not otherwise succeed in college, Baker said. “It would be a loss to see that vanish.”

Senior Kyle Cordova chose Adrian half for the chance to play baseball, half for its small size. He was leaning toward a liberal arts major but ended up in criminal justice to prepare for a law enforcement career. He’s had the same half-dozen or so professors year after year. “They know me, they know how I work, what I’m weak in, what I’m strong in, how to help me better,” he said. “That’s better than going to Michigan State.”

Communications major Garrett Beitelschies said his professors meet with him on every paper and “you’re actually talking in front of the room, having to defend your stance.” He’s also partaken of an extracurricular feast unimaginable at the bigger schools he considered: president of his fraternity and the senior class, radio, theater, homecoming king and even dressing up as Bruiser the Bulldog mascot at football games. With financial aid Adrian ended up costing him less than some state schools.

But neither said they’d taken a class where the syllabus entailed reading, say, a set of novels.

Liberal arts colleges talk constantly and perhaps with more urgency lately about better pitching their case to the public. But until they do, they’ll have to respond to what that public wants.

Docking says the survival recipe will vary (hockey helps here but won’t in for Florida colleges). But the basic formula is the same.

“You need to be able to offer more than simply strong academics or you’re going to have difficulty attracting students,” he said. “There’s a lot of competition. You’d better have something to distinguish yourself.”