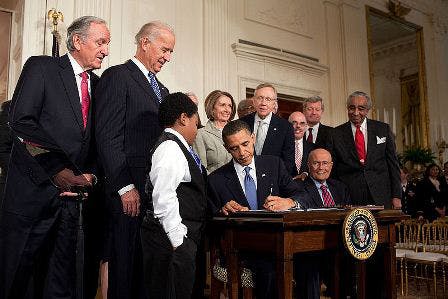 Signed in 2010, President Obama initiated the Affordable Care Act, dubbed “Obamacare,” as a mechanism to provide all citizens the option to afford health insurance

With colleges and universities recruiting more adjunct professors, schools have been able to reduce the costly expenses of large salary and benefit packages that are typically associated with full-time employees. Yet, schools have started to re-evaluate their use of adjunct professors in order to comply with the Affordable Care Act (ACA), demanding that employers provide affordable health coverage for all of their full-time employees, which includes anyone working 30 hours or more.

Signed in 2010, President Obama initiated the Affordable Care Act, dubbed “Obamacare,” as a mechanism to provide all citizens the option to afford health insurance. After several years of insurance companies abusing consumers through misleading practices, the Obama administration initiated a mandate that required private insurers to supply their consumers with the option of a “premium package,” particularly if they require extensive health needs. While major coverage requirements, including the employer mandate, will not become effective until January 2014, employers are still working proactively in anticipation of the new regulations.

U.S. Secretary of Health and Human Services Kathleen Sebelius notes that the new health care coverage law gave tax credits to 360,000 small businesses. According to Sebelius, the new tax credits will allow businesses, including higher education institutions, an “opportunity to give their employees coverage and an array of affordable, private insurance plans to choose from.”

Although for higher education institutions, “change” appears in their redefined concept of a full-time worker. Faculty who typically work more than 30 hours are now able to take advantage of health insurance packages that adequately suit their health care needs, including those contingent faculty who dangle between the lines of working 30 to 35 hours a week.

In public schools around the nation, two-thirds of the faculty consists of contingent instructors. As such, schools are under immense pressure to carve out room in their budgets to accommodate health coverage for all employees working more than 30 hours. However, the problem for schools is not merely in their hesitation to withhold money. For higher education institutions, a typical benefits package for a regular, full-time, employee can cost an additional 25 to 30 percent of the employee’s base salary. Several schools fighting the rising costs of higher education are not financially equipped to allocate that amount to each adjunct professor.

In order to ensure that higher education administrations are not compromising their budgets, the IRS under Obama’s administration has proposed possible methods of measuring an employee as full-time, and thus, eligible for employer-based coverage. The IRS created a “safe harbor” for employers to determine whether or not employees meet the 30-hour requisite. Under this proposal, employers have the option of using a 3-12 month period where they can decide which employers are considered a variable-hour staff member — one that doesn’t regularly work a 30-hour week — or a seasonal employee who typically meets the 30-hour threshold. During this measurement period, schools are not required to supply coverage. However, directly after the determination period, schools will need to implement the ACA regulations.

Schools such as the Community College of Allegheny County (CCAC) have already started to react to the new regulations. CCAC recently made the decision to modify its employment practices for adjunct professors by reducing the course loads and hours of approximately 400 of their adjunct faculty. Clerical and administration positions, comprised mainly of temporary, part-time employees, will now be limited to 25-hour work weeks, while adjunct professors will only be able to teach 10 credit hours per semester. In cutting hours, and ultimately maintaining its employees as “part-time” workers, the CCAC estimates it is saving about $6 million that would alternatively be spent on employer-assisted health care coverage.

In a statement released by the college, President Alex Johnson responded, “While it is of course the college’s preference to provide coverage to these positions, there simply are not funds available to do so.”

Like Allegheny, the issue of funding will induce many higher education institutions to reconsider their employment tactics toward contingent faculty. According to Andy Brantley, president and CEO of College of University Professional Association for Human Resources (CUPA-HR), schools across the nation have faced extreme adversity in regard to budgetary constraints. The demand for the amount of courses they can offer has increased, while the amount of state funding has decreased. In trying to avoid disrupting this cost-demand predicament, several schools have looked to their adjunct faculty to help fill that gap between the cuts in assisted funding and the rises in course loads.

“I don’t see this as much as institutions really not wanting to acknowledge those employees in a more substantial way; it’s just that the budget constraints for those institutions are forcing them to make these decisions that in all likelihood, they really don’t want to make,” Brantley remarks, in response to the budgeting crisis.

Brantley notes that some colleges have chosen to increase class sizes in order to maintain regularity in their number of faculty employed. On the other hand, schools like CCAC considered different staffing models that engage adjunct faculty at a commitment with lower hours. In regard to exploring other practical methods to comply with such regulations, Brantley says, “There’s not one particular option that is a win-win.”

He further explains, “We would never want two employees to be performing the same duties and responsibilities, one receiving full benefits and the other not receiving the same benefit package.”

If colleges were to consider the option of providing a massive workload on one professor, not only would this practice be unethical as Brantley says, but also, it could deteriorate the quality of education that adjunct instructors deliver.

Maria Maisto, adjunct faculty and president of New Faculty Majority, identifies the heavy reliance on adjunct instructors for the sake of budgetary savings as “unjust.” In staying within their financial constraints, she says, schools have neglected contingent professors with necessary teaching resources. As a result, professors are forced to deliver inadequate classroom experiences, without supplies such as personal offices, telephones, computers, associated software and technological tools. Oftentimes, adjunct staff only receive course syllabi, curriculum guidelines and library resources. Maisto explains that these lacking resources are critical to shaping student development because they “define quality education in today’s colleges and universities.”

In addition to the minimal resources allocated for adjunct faculty, the sourcing and hiring practices tend to be just as negligible when trying to recruit the much-needed staff. Maisto identifies a common practice upon higher education administration in hiring as the “just-in-time” employment, where schools inform their contingent faculty of their course load one or two weeks before the beginning of each academic term.

In some cases, schools have even cut an entire course taught by adjunct professors in order to accommodate a class taught by a tenure-line faculty member. In both situations, faculty members are forced to prepare hurried course curricula, as their time is uncompensated.

With the new legislation influencing schools to cut even more hours and to trim off even more from professor’s salaries, adjunct instructors are beginning to consider taking on multiple teaching jobs in order to compensate for their lower payments.

However, as the ACA regulations don’t officially become effective until January 2014, both schools and contingent professors are re-evaluating their employment practices.