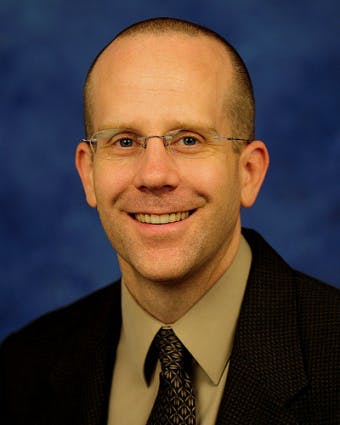 Dr. John Cheslock
A series of studies was released last fall raising concerns that intercollegiate athletics was draining schools and pushing them toward their own fiscal cliff. Discussions about the merits of the studies had barely started before a near-dizzying scramble of conference affiliations ensued, leaving the warnings in the studies in the dust.

Today, as the collegiate basketball season heats up and some begin to ponder next fall’s football lineups, the conference affiliation scramble continues. Major institutions continue on the hunt for new alliances they hope will generate even more money to support their increasingly expensive programs. In the process, the distance between the haves and have nots gets wider and wider.

“A major determinate of your financial situation is your conference,” says Dr. John Cheslock, co-author of The Unsustainable Nature of the Intercollegiate Athletic System, one of the studies issued last fall, and director of Penn State’s Center for the Study of Higher Education.

Rutgers University, for example, had been subsidizing its athletic programs by about $1,000 per student, Cheslock says. The university is hoping that its jump to the Big 10 conference from the Big East will bring it more money, and in the process, ease its need to divert more and more of its money to athletics from other programs, he says. The same is true for the University of Maryland, which made a similar move, jumping to the Big 10 from the ACC, primarily to secure the financial future of its intercollegiate sports program. It’s an unsustainable pattern, he warns.

“Congress is going to have to get involved, just like we’ve seen in other industries,” says University of Memphis professor Dr. Michael Hutchinson, co-author of a study, titled De-escalation of Commitment among Division I Athletic Departments. He says some outside force needs to address the intercollegiate sports industry and put some new rules in its operating procedures. If not, he says, “We’re going to continue to see the divide between the haves and have nots.

The studies, six in all, were funded by the Knight Commission on Intercollegiate Athletics, a nonprofit group of academics seeking changes in intercollegiate athletic programs to bring more balance between them and the missions of colleges and universities.

Most higher education leaders acknowledge that costs have gotten to a point where they are more than footnote items. That said, nothing short of laws, a fundamental change of heart or a financial crisis is likely to change the race to be in the big arena of intercollegiate sports.

Colleges in Georgia illustrate the spectrum of issues.

The University of Georgia, a state-supported institution, is a member of the Southeastern Conference (SEC), one of the nation’s five major college sports conferences with a pot of gold flowing in from its telecast contracts each year that help secure the financial future of conference members’ expensive athletic programs.

In contrast, Fort Valley State University, also a state institution, is losing about $1 million a year on its intercollegiate athletics program. It is not part of a major college sports conference, lacks robust alumni funding, has no major sponsors and has no television sports contracts to ensure income each year.

“It’s not a question of any lack of interest or pride,” says Dr. Canter Brown, executive vice president at Fort Valley, noting the university attracts supporters from around the area for its intercollegiate events. “It’s a matter of who can afford to pay for it,” he says, noting Fort Valley, like most small, rural public colleges, doesn’t have rich alumni or a television revenue contract through its athletic conference. “The bottom line is always going to be red ink unless you have a very significant amount of sponsor support or booster contributions,” he says.

Absent a substantive change of circumstance, Fort Valley will have to make the tough choice of moving to the NCAA Division III from Division II. That would mean the end of scholarships for the nearly 80 student-athletes who rely on scholarships to get into and through college, says Brown. It could also mean the end of some of the university’s athletic programs, as the state does not allow public institutions to subsidize their intercollegiate programs with tax dollars.

At Paine College, a small private institution near the east coast of the state, Dr. George Bradley, university president, is going full-throttle with his plan to expand the institution’s intercollegiate program with a new football program starting this fall.

“Athletics at a Division II institution is a major revenue drain,” says Bradley, speaking of his institution and the more than 1,200 other institutions — public and private — in the NCAA Division II.

“Managing it right, you can make a little money or break even,” says Bradley of his new venture, noting he does not expect adding a football program to generate significant revenue. It will boost enrollment a bit, he says, and help the university enhance the community’s sense of pride in its relationship with the small university.

Asserting intercollegiate programs are part of developing the “whole person,” Bradley notes that athletic programs are no different from music or arts programs.

“Athletics is a critical component that draws the community,” he says, adding there is no college football team within a two-hour radius of Augusta, Ga., where Paine is based.

Meanwhile, Spelman College in Atlanta raised more than a few eyebrows last fall when it said it was launching a campus-wide health and wellness education program for its entire campus and dropping its increasingly costly intercollegiate athletics program.

The college spends about $1 million a year supporting its 80-student-athlete athletic program, despite being an NCAA Division III institution, meaning it does not have to award scholarships to its athletes. Also, it has no football program, the most expensive of most intercollegiate athletic programs.

Even for a small college, the Spelman move attracted lots of attention and scattered praise as a bold action. Still, no other institution followed suit and several, when asked, say the decision was a Spelman decision in Spelman’s interest. University president Dr. Beverly Daniel Tatum agrees.

“Instead of spending hundreds of thousands of dollars transporting a small number of athletes to intercollegiate events, we could invest those dollars in intramural programs and wellness activities that can be sustained for a lifetime,” Tatum wrote in a response to several questions about Spelman’s decision.

“Certainly what I read about the high cost of some athletics programs, the salaries of coaches relative to others on the campus and the often troubling graduation rates of student athletes suggest a need for examining institutional priorities, particularly in Division I and Division II,” writes Tatum.

“In the case of Division III, where there are no athletic scholarships involved, the programs can still be quite expensive,” Tatum continues. “It makes sense that campus leaders should do a cost-benefit analysis in their own context. Some campuses have a much higher percentage of students involved in intercollegiate athletics than we do and for whom the sports program is an important factor in their enrollment efforts. But for small campuses where the fixed costs for travel, coaches and other infrastructure support are high and participation is low, as was true in our case, it makes sense to consider other options with greater campus-wide benefit.”

The pressure on institutions of all sizes to grow their programs or get out of the business is only likely to increase, say many of those interviewed. They note coaching salaries continue to rise significantly, and in 2014, college football’s elite begin to share the $400 million in revenue expected from the new playoff series separate from the NCAA.

“We have proposed a process to keep athletic spending in check with academic spending,” says Amy Perko, executive director of the Knight Commission. “It hasn’t gotten much traction,” she says, noting the actions of schools since the commission’s idea was first proposed in 2010. “Much more could and should have been done.”