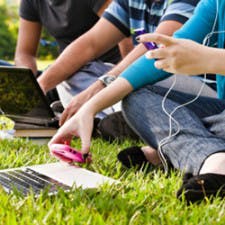 Among the top trends in enrollment, students are increasingly using mobile devices to obtain information.
Constrained family finances, more students from more diverse backgrounds and online social networks are making it easier for “Generation C” — the “C” stands for “connected” — to investigate an institution’s reputation. Those are among the top factors that will influence enrollment in independent colleges in 2013, a recent study has found.

The top trends “have created a marketplace situation where higher education administrators must think differently and evolve in a manner that responds to the needs of individuals, families and our society,” says the study — titled Ten Trends for 2013: How Marketplace Conditions Will Influence Private Higher Education Enrollment — And How Colleges Can Respond.

The study was produced by the Lawlor Group, a Minnesota-based higher education marketing firm.

Tony Pals, a spokesman for the National Association of Independent Colleges and Universities, said the study “confirms the many challenges facing colleges and universities today.”

“Economic, demographic, marketplace and technological trends are converging to cause an unprecedented time of change for higher education,” Pals said.

Michael J. O’Leary, vice president for enrollment management at Goucher College, a private college in Baltimore, said with the exception of the rise of MOOCs, or Massive Open Online Courses, the trends identified in the report are “not new in terms of recent new.”

“But a lot of it is new since really the summer or fall of 2008, when the economy really tanked,” O’Leary said. “And that’s when families started having more difficulty paying for higher education. That’s when colleges and universities felt the crunch.”

Since then, he said, institutions have felt increased pressure to respond to market forces identified in the Lawlor study.

The top ten higher education trends identified in the study, which are listed in full here, include:

· Money Woes: “Many families are experiencing a diminished ability to pay for a college education,” the study states. “Compared to pre-recession levels, median household income, home equity and net worth are all down.” But college tuition costs have steadily risen, and the annual net price of tuition, fees, room and board at a private nonprofit institution is now $23,840, or roughly half the average annual income in the U.S.

· Public Perception: While most of the public believes a college education is necessary to get ahead, a “value gap” has “opened up in the polling because far fewer people believe going to college at any price will be worth the financial investment.”

· ROI is King: “In calculating a college’s value proposition, families factor in outcomes as well as cost and prestige. They expect proof of high graduation rates and graduate employment at acceptable salary levels.”

· Different Demographics: ”The country’s changing demographics, combined with a widening gap between the nation’s rich and poor, mean more first-generation students and students from socioeconomic backgrounds that not only make paying for college a challenge, but also often leave them underprepared for college-level study.”

· Engaged Consumers: “Generation C” (the C is for “connected”) is “not bound by age brackets, but rather by shared behavior — their use of real-time social, local and mobile (SoLoMo) technology,” the study states. “They find it increasingly easy to investigate institutions’ reputations via online networks, word-of-mouth recommendations, and other communication channels beyond the colleges’ direct control.

· MOOC Mania:“The proliferation of massive open online courses (MOOCs) is drawing attention to how college credits are awarded. All types of online and hybrid courses are thriving as the marketplace seeks cost-effective access and convenient delivery.”

The Lawlor study includes a series of recommendations for how private and independent colleges can respond to these marketplace forces. The recommendations include the need to “translate the liberal arts,” “be distinctive,” be “edupreneurial” and provide proof of “postgraduate outcomes that point to positive return on investment.”

O’Leary cited several examples of how Goucher has already implemented the ideas recommended in the Lawlor study.

In the area of being distinct, for instance, O’Leary noted how in 2006, Goucher became the first liberal arts college in the nation to make it mandatory for all undergraduates to study abroad before graduation.

As for emphasizing the value of a liberal arts education, he said, school officials emphasize how the college not only prepares students for their first career, but their last. “More and more people change careers, and they must have the intellectual skills to pivot and have a storage bank to rely upon,” O’Leary said. “Liberal arts delivers not only that knowledge, but those skills.”

O’Leary also noted that the incoming class of 2012 at Goucher was more diverse than ever, with 33 percent being students of color, up from 27 percent the year before. He attributed the increase in diversity to word of mouth from current and former students of color who were pleased with their experience and tell their former teachers and guidance counselors.

Pals, of NAICU, noted that enrollment at private colleges is actually up.

He cited U.S. Department of Education data that shows enrollment in private nonprofit colleges and universities increased 1.9 percent last year — from 3.88 million in 2010 to 3.95 million in 2011 — while total postsecondary enrollment in the United States declined slightly for the first time in 15 years, by 0.2 percent, or from 21.59 million to 21.54 million.