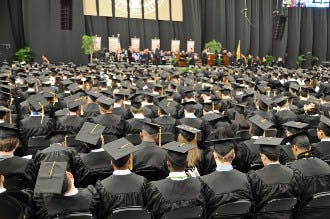 Once thought of as the key to premium earnings and better job selection for recent graduates, the bachelor’s degree was deemed a valued commodity for entrance into the labor market. However, a study released today indicated that the baccalaureate program might not hold its preliminary value, as the quantity of recent college graduates has grown far faster than the amount of available “bachelor-degreed” jobs.

The report, conducted by the Center for College Affordability and Productivity (CCAP), attributed the large amount of underemployed, recent college graduates to the economical premise of a lacking supply-and-demand flow in education and the workforce.

With a total of 41.7 million employed, recent college grads, 37 percent are working in jobs that require a high school diploma and 11 percent have secured jobs that require only an associate’s degree. Although recent college graduates—in general—experienced a disadvantage entering the labor market, those graduates from more elite, private schools were able to navigate their way into jobs that more appropriately suited their education credentials.

“I think those who are most impacted by this are those from lower-income families,” suggested Richard Vedder, economics professor at Ohio University and director of CCAP.

Because the college degree is often perceived as screening devices for employers, according to the study, graduates of elite, private universities benefit, as they are “perceived to be a cut above the average college graduate attending a second- or third-tier institution.” As a result, they oftentimes receive the most selective and competitive jobs allotted for recent graduates.

The reality, illustrated by Vedder and the CCAP study, suggested that the majority of available jobs are not demanding of higher education. Thus, jobs that are typically filled by those with lower levels of education attainment such as retail salespersons, cashiers, office clerks, customer service, and maintenance specialists, oftentimes have attracted recent grads that carry less specialized experience. The 24.6 percent of bachelor-degreed individuals working in retail, the 10.2 percent working as cashiers, and the 14.3 percent working as waiters or waitresses better capture the phenomenon of the accessibility and availability of jobs designed for lower levels of education attainment.

Those jobs sought out by individuals holding a bachelor’s degree have requirements that are “highly-specific” and are offered in non-generalized post-secondary programs. As a result, says the report, recent graduates who majored in highly technical fields, during the course of their undergraduate studies, experienced a better chance of acquiring reputable jobs that provided higher earnings.

According to the report, majors like accounting, economics and electrical engineering displayed average salary earnings ranging anywhere from $50,000 to $60,000. Majors in liberal arts and humanities such as anthropology, English and psychology displayed lower wages ranging from $30,000 to $38,000. In addition to the type of major, the amount of postsecondary education also had an impact on job selectivity and salary earnings. Unsurprisingly, those with postgraduate degrees had higher chances of attaining greater pay rates and better job selections.

“Nowadays, it is almost routine for students to attend college and attain the bachelor’s degree, so to get a leg-up on others, the bachelor’s just doesn’t do it, and this is primarily because what it takes to meet the competency levels for particular kinds of jobs has enormously expanded over time,” Vedder said.

Indisputably, with or without postsecondary education attainment, the lethargic job growth and job availability have been a severe consequence for everyone because of the economic downturn. But even amid the projected job growth, the issue of underemployed, recent college graduates will remain a challenging complex.

Many economists such as Anthony Carnevale of Georgetown University’s Center on Education and the Workforce have argued that higher education is a long-term investment used to create human capital in the labor market. The human capital idea, nominating college-educated individuals, as those better off to gain increased capital in the future of their careers, has reiterated the value of higher education.

Carnevale noted in his report, “The Undereducated American,” on how unlikely it is for high school graduates to obtain higher levels in fields designated for a lower-skill level. He reports that only 17 percent of high school graduates reach a managerial or professional level in such fields, while 65 percent of those holding bachelor’s degrees were able to easily submit to higher-level positions. According to Carnevale, such data further implied that “some type of postsecondary education is a prerequisite for entry into most jobs.”

“A lot of college graduates who are taking jobs as bartenders and taxi drivers oftentimes do well five years down the road, but it seems that more and more of those graduates are staying in those (bartenders and taxi-driving) jobs for longer periods,” Vedder explained.