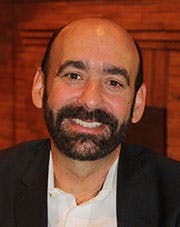 Richard Arum, professor of sociology at and education at NYU, believes accrediting bodies must be accountable for student learning.

Washington, D.C. — Accreditors of institutions of higher education should assume greater responsibility for ensuring student learning, an education professor and author of a provocative 2011 book that slammed universities for lack of academic rigor said Wednesday.

“I’m not blaming accreditation,” Richard Arum, Professor of Sociology and Education at New York University and co-author of “Academically Adrift: Limited Learning on College Campuses,” told attendees here at the annual conference of the Council of Higher Education Accreditation.

“But you have to assume that the existing accreditation system hasn’t been up to the task of ensuring academic rigor and learning,” Arum said.

Arum spent a good portion of his presentation revisiting some of the key findings of “Academically Adrift,” a treatise that found that disturbingly low numbers of college students were being required to do any substantial reading or writing in their college courses and that, consequently, large numbers of students showed no significant improvement on the Collegiate Learning Assessment, an instrument he described as imperfect but “the best we have.”

n   Ensure that assessments being done at a college allow comparisons across departments. “Because if you allow every unit to come up with their own way of figuring things out, you can’t identify” which programs are doing well and which ones aren’t.

n   Check to see if administrators are emphasizing learning and academic rigor. This includes looking at whether they’re making investments based on academic rigor and not just “chasing student-consumers with new dorms, student centers and athletic facilities.”

n   Search for evidence that faculty is taking responsibility for student learning.

n   Search for evidence that students are subjected to meaningful assessments where they get “real information on their performance.”

Arum said lack of learning on campus cannot be remedied by accreditors alone, or any one group, for that matter.

“I don’t think it’s accreditation’s problem to solve because it will never get solved that way,” Arum said, adding that higher education administrators are very adept at “symbolic compliance.”

“In higher education, they’re all smart people,” Arum said. “The institutions themselves have to take on the issue. They have to believe in it themselves.”

He said the problem also belongs to boards of trustees.

“Trustees have to also take responsibility and, if an administrator can’t answer questions (about student learning), hold them accountable,” Arum said.

He also lamented that tenure, promotion and compensation are all tied to research and scholarship and that, consequently, “learning becomes a smaller and smaller part of the faculty incentives, and, when learning is used at all, it’s just the course evaluation, which are student satisfaction surveys, ‘did you like the professor’?

“The more entertaining and the more lenient you are, the more they like you,” Arum said. “These incentives are not set up to get the outcomes we want.”

“We have at least the responsibility to tell them you’re doing less than an hour a day of studying; that’s substandard. That’s not a B-plus. That’s a C,” Arum said. “If we don’t tell them and take their money, that borders on criminal in my estimation. We have an obligation to signal to them” when they are performing well.

He also recommended including a course’s average grade on student transcripts to show if students are “gaming the system” by taking easy courses.

Arum was one of several speakers who presented ideas for accrediting agencies to foster student success.

Others included Stan Jones, president of Complete College America, who called for, among other things, strategies to get more students to attend full-time instead of part-time because of research that shows full-time students have higher rates of completion, and more “guided pathways,” such as eAdvisor at Arizona State University, to make sure students take the right courses to graduate in a timely manner.

Jones, who spoke at a session titled “The Completion Agenda: What Does This Mean for Access,” was joined by William Scroggins, president and CEO of Mt. Saint Antonio College in Walnut, Calif.

Scroggins stressed the need to view completion more in terms of how well colleges and universities are meeting regional workforce demands as opposed to how many graduates they produce.

“On my campus, it’s more an effect of poverty than anything else,” Scroggins said. “The issues they bring are tremendous” and require a lot of support, he said.

The CHEA conference also explored the historic and future role of for-profit colleges.

Andy Rosen, chairman and CEO of Kaplan Inc., a for-profit company that provides higher education, said the higher education community should welcome a healthy and vibrant private sector in higher education because for-profits have spurred much of the innovation being embraced by colleges and universities today.

“A lot of the change has come in emulation of the for-profit playbook,” Rosen said. He cited online education as an example—something he said was looked at with suspicion and disdain when for-profit colleges launched online learning programs more than a decade ago.

Kevin Kinser, an assistant professor of education at State University of New York at Albany, shared statistics that showed the dramatic increase the number of for-profits that reap federal funds.

For instance, he said, in the 2000-01 school year, there were just three for-profit institutions among the top 20 recipients of Title IV grants, and just two in the top 20 for loans, and none had major online programs.

He said for-profit capacity “cannot quickly or easily be replaced” and that “we need a diversity of institutions with a range of distinctive missions.”

Kisner also noted that for-profits face a number of challenges.

One challenge is to deal with the tension between trying to increase enrollment versus increasing graduation. “This is more than inputs versus outputs, but refocusing the business model to emphasize that students graduating is really what the product is,” Kisner said.

This will require convincing investors that a lower profit margin “has to be acceptable.” “One student graduating has to be more important than two enrolling,” Kisner said.

“If they were able to do that, it would move us light years ahead,” Kisner said.