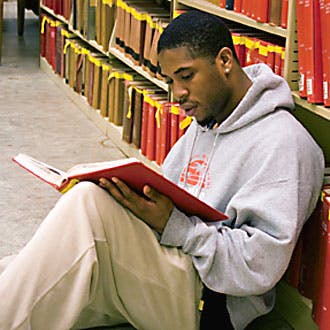 Many scholars focus on the achievement gap, but the “aspiration-attainment” gap is less addressed in higher education.

“Explaining the barriers preventing more Black men from succeeding in higher education raises the most controversial and politicized issues of race, gender and class,” says Dr. Juan Battle, a psychology professor at CUNY. He is one of many studying the “Aspiration-Attainment Gap,” where as many Black elementary school students as White aspire to go to college, but far fewer, particularly males, ever obtain a degree. “Black researchers don’t agree on the causes, and we certainly don’t agree on the solutions,” he adds.

The clashing perspectives range from those of Dr. Halford H. Fairchild, a professor of psychology at Pitzer College, to the ideas of Kevin Todd Porter, author of the recent book, Angry Little Men: Hypermasculinity, Academic Disconnect and Mentoring African Males, to those who feel the biggest barrier is a perceptual problem.

According to Fairchild, Black males are the targets of a system of White supremacy and oppression stretching from special education classes to the prison industrial complex. “One has to have an historical sensibility—that the issues of today are the result of decades, centuries, of educational practices. Back in the day, the presumption of inferiority—and blatant racism—denied educational opportunities to persons of African descent and also Native Americans and Latinos,” he says. “These past practices die hard.”

According to Porter, for many young Black men, “Education is way down on a list of priorities that might include drugs, gangs, chasing girls or just trying to survive a disruptive home life. … Our boys know that education can offer a brighter future, but maintaining a street image trumps doing homework, studying for tests and behaving in the classroom.”

In stark contrast is the opinion of Dr. Ivory Toldston, editor of The Journal of Negro Education. In the third of his extensive reports on Black men in higher education sponsored by the Congressional Black Caucus Foundation, Challenge the Status Quo, Toldston and co-author Dr. Chance W. Lewis argue that “Black males are not underrepresented in colleges and universities.” After acknowledging that many people would find this statement unbelievable, they back up their case by stating that “Black men over 18 comprise 5.5 percent of the adult male population and 5.5 percent of all college students.” They go on to say, “Every decade, the number and percentage of Black men who earn a college degree is increasing.” For Black men over 25, the figure has risen from 11.1 percent in 1990, to 13.2 percent in 2000, and 15.8 percent in 2010.

In the independent film Hoodwinked, Toldson joined Dr. Boyce Watkins, Dr. Jawanza Kunjufu and others to confront the widely-accepted myths (such as there are more Black men in prison than in college) that easily become self-fulfilling prophecies.

Is special education really a trap?

Other researchers, such as Dr. Mary M. Wagner of SRI International, find these comparisons unpersuasive. She argues that, because so many Black children are born into poverty, they experience high rates of low-weight births, homelessness and psychological trauma that would logically cause emotional and intellectual difficulties. In fact, the Association of Black Psychologists says that 14 percent of America’s children are African-American, but that the percentage in foster care and/or awaiting adoption is 29 percent. Children usually wind up in foster care because their parents were abusive, neglectful, criminal or addicted, and 29 percent is close to the percentage in special education labeled “emotionally disturbed.” In addition, the higher ratio of Black boys to girls in special education mirrors that of Whites.

The war on drugs and the ‘prison industrial complex’

If overrepresentation in special education is an example of academics not agreeing on the “real problem,” the prison industrial complex is an example of Black policymakers not being able to agree on the real solution. Gary Sweeten, an assistant professor of criminology and criminal justice at Arizona State University West, has studied how getting arrested and/or going to court negatively disrupts graduation rates and concludes that the experience is most detrimental to the least violent offenders.

“The war on drugs has just been devastating in terms of branding thousands of young Black men with criminal records and disrupting their educations,” he says. “Therefore, I’m stunned that the Obama justice department has continued to threaten California, Colorado and Washington state over their new marijuana policies.”

Dr. Clarence Lusane, author of Pipe Dream Blues, Racism and The War on Drugs, says, “The legislative history of drug laws is profoundly racist. However, I think that very few of the brothers in prison would have gone to college. Instead, I feel the key is to look at the 30 percent of Black male high school graduates who are qualified and just don’t apply or don’t finish.”

The case for optimism

Even if special education and the prison industrial complex have siphoned off large numbers of Black males in the past, there are several very positive trends. More special education students are being served in mainstream classrooms at the same time when public schools are increasing college prep classes. In addition, sharply decreasing rates of violent crime across the country predict lower levels of arrests and victimization among Black teens. As Toldson and Lewis write, “According to the National Center for Education Statistics, the status dropout rate for Black males in 2010 is 9 percent compared with about 20 percent in 2000.”

According to David Conley in the report Redefining College Readiness, “college readiness for all” consists of four sets of skills. These are: key cognitive strategies (how to balance a chemistry equation), academic knowledge and skills (how to write and analyze what you read in any subject), academic behaviors (how to manage your time or seek help) and contextual skills and awareness (the ability to effectively search for and apply to college).

The first two sets of academic skills may be being addressed in the nationwide push to improve primary and secondary education. Addressing the non-cognitive skills and college knowledge issues may be the key to success for Lusane’s 30 percent who don’t apply or don’t finish. The single most important factor might be better college advising in high school because Conley and his associates have found that the most qualified Black students often wind up going to less selective colleges than they could have attended.

Despite the gauntlet of challenges they face, Black men have a tremendous desire for college and enroll at rates comparable to White men. Completion is the solution. If the 1.1 million Black men enrolled in undergraduate programs graduated, the total with degrees would increase by 71 percent.