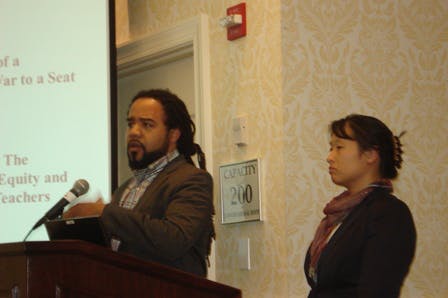 Doctoral students Roderick Carey and Laura Yee say diversity must be taught daily and understood early in the education process.

WASHINGTON — Roderick Carey and Laura Yee say diversity must be taught daily and understood in order to serve all students in elementary and secondary schools.

The doctoral students at the University of Maryland work with future teachers and often see challenges in the classrooms.

“We see a lot of White teachers, especially in elementary schools, but they are from monolingual, suburban communities with limited exposure to other environments,” Yee said Tuesday. “Their experience will be less relevant to a more diverse environment and schools are becoming so much more diverse. I’m not looking to blame anyone. Our hope is these teachers come to the schools with some [diversity] experience than none at all.”

Yee and Carey spoke about this topic during the seventh annual National Association of Diversity Officers in Higher Education (NADOHE) conference.

Various sessions were held to promote, celebrate and encourage diversity at all institutions of higher learning. The attendees acknowledged with state and federal budget cuts, the problem of being able to enhance current programs and incorporate new ones in the curriculum looms.

“You must look for programs you want to fund and then effectively and strategically seek ways to put those programs to fruition,” said Reese, who is also vice president for institutional equity at Duke University. “Diversity is not just a societal issue, but an economic issue. Diversity is about the way people live and work together. It takes a lot of work to make that happen.”

Economics is how some college officials present their viewpoints when discussing why diversity is necessary.

NADOHE co-sponsored a session about minority males with the American Council on Education, which held its 95th annual meeting this week in the same hotel.

Arlethia Perry-Johnson directs the University System of Georgia’s African-American Male Initiative, which she says has received $760,000 in grants ($600,000 from the Lumina Foundation) toward the program.

The system has more than two dozen schools statewide participating in the initiative.

“The state wants an educated workforce. AAMI helps to ensure that our students are properly prepared and educated to become economically viable citizens — thereby contributing to the state’s success.”,” said Perry-Johnson, who is also vice president of external affairs at Kennesaw State University, where the state’s AAMI program is headquartered.

Although the majority of conference attendees were people of color, one keynote speaker was White.

Alger also provided examples of what is being done at his school to improve diversity: appointing a diversity taskforce; continuing to research and prove how diversity works; and working with local community leaders and businesses.

Alger joked and then became serious about his involvement in providing leadership.

That’s why the doctoral students, Carey and Yee, say they’re passionate in making sure future teachers understand diversity and incorporate what they learn to their students.

Carey and Yee spoke about their experience in teaching prospective teachers based on a chapter they wrote in a book entitled Occupying the Academy: Just How Important is Diversity Work in Higher Education?

Carey said relationships are one of the most important aspects in knowing students, especially in an urban setting.

“One piece of advice I would give future teachers is they need to take time to know themselves before they get to know the kids,” he said. “Once they know themselves, then they can see they may have something in common with the kids. That is how you build relationships and can know your students much better. That’s how you can have a diverse classroom.”