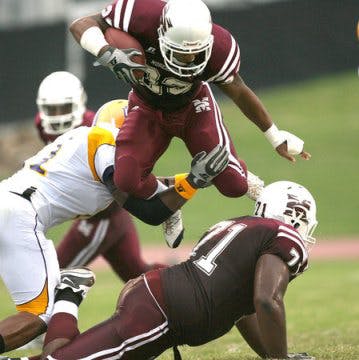 HBCU football teams have faced a lot of controversy for “pimping themselves out” against major programs to boost athletics funds. The practice may soon be coming to an end, if larger programs follow the Big Ten’s lead.

Football programs at Historically Black College and Universities could be sacked for a huge financial hit if other major conferences adopt the Big Ten’s proposal to stop scheduling football games against schools from lower level conferences.

The Big Ten is one of 11 conferences that make up the NCAA’s Division I Football Bowl Subdivision (FBS), the top tier in college football.

HBCUs that are members of the SWAC and MEAC, along with Tennessee State and other schools that play at the next level—the Football Championship Subdivision—can earn guarantees well over $500,000 for playing teams from the top level. More often than not the games are blowouts—many of epic proportions—in favor of the FBS schools, which schedule the contests because they give them an additional home game and a soldout stadium.

Savannah State’s 84-0 loss to Oklahoma State in 2012 is the largest margin of victory for an FBS school against an FCS foe since these matchups began in 1978, the year that the NCAA split Division I into two levels. It eclipsed Arkansas State’s 83-10 victory against Texas Southern in 2008.

FBS schools were 1,838-396-18 for an all-time winning percentage of .820 in games against FCS schools entering the 2012 season, according to FootballGeography.com

Last season, 79 of 122 FCS members—including 14 of 22 Division I HBCUs—played at least one game against an FBS opponent. South Carolina State, Morgan State and Savannah State each played two. Ironically, Big Ten kingpin Ohio State will pay Florida A&M $850,000 for a game on Sept. 21 that may well be one of the conference’s last games against an FCS opponent.

“While the Big Ten may say that (it won’t schedule FCS opponents), others will do what’s best for their conference,’’ Bethune-Cookman athletic director Lynn Thompson says, sounding a note of optimism that other FBS conferences won’t become copycats of the Big Ten.

Alabama earned $23.6 million for the Southeastern Conference by winning the 2013 BCS National Championship Game, the seventh consecutive national title for the SEC and the ninth in the game’s 15-year history.

That payday prompted the Big Ten to move away from playing FCS opponents in order to improve its member schools’ strength of schedule and enhance its chances for a spot in the four-team playoff for the BCS crown that begins with the 2014 season. Last season, No. 16 Nebraska was the highest ranked Big Ten team in the final BCS standings. The result would have been that the Big Ten, long regarded as one of college football’s premier conferences, would have been excluded if the four-team playoff system had been in place.

That’s an unsettling prospect for the Big Ten and other conferences with questionable strength of schedule.

“It would be a crippling blow not only for HBCUs, but also for other FCS schools,’’ Savannah State athletic director Sterling Stewart says. “Those games are the lifeblood of our programs. My greatest hope and desire is that they don’t follow suit. The Big Ten is reacting trying to catch up with the SEC. FCS athletic directors and presidents have to look at how and what they’re doing. I don’t think other schools are going to follow suit. I’m really hoping they don’t.’’

Savannah State, in just its second year of competition at the FCS level last season, has an athletic budget of about $5 million. It earned $860,000 while losing to Oklahoma State 84-0 and Florida State 55-0 on consecutive weekends. Steward says those paydays helped fund staff positions and new academic initiatives covering a two-year period.

“Without it,’’ Steward reasons, “would we be able to do what we’re doing? Yes, but it would have been more difficult.’’

Alabama A&M coach Anthony Jones, whose team brought home $500,000 for its 51-7 loss to Auburn, says it’s a question of when other conferences will follow the Big Ten’s lead, not if. Regardless of the number, Jones says it would be detrimental to HBCUs for any FBS schools or conference to stop playing FCS members. That would leave a smaller pool of potential FBS opponents and in all likelihood decrease the amount of the payouts they would receive.“Whenever (someone) sets a precedent, you’re sure to have some followers,’’ Jones says. “I don’t know how soon that will happen, but there will be someone to follow, and when you take one team or conference off the market it has an adverse effect on everybody, not just Black colleges.’’

Savannah State was widely criticized in the media and became the butt of jokes throughout college football in the wake of its lopsided losses last season to Oklahoma State and Florida State, both of whom were in the top 10 nationally when they played the Tigers.

Nonetheless, Steward makes no apologies for playing the contests.

He says earning a big payday wasn’t the only motivation for games. Opportunities for Savannah State’s student athletes to compete at the highest level and its staff to network with top coaches were taken into consideration as well, he says.

“The schedule we put together was well thought out,’’ Steward says. “We thought we had better personnel, coaches and student athletes who would have competed better. For me, it was about the experience. I would do it the same way if I had it to do again.’’

Steward, however, scheduled two less formidable opponents this season. The Tigers will face Miami (Fla.) and Troy University after considering games with teams that would have paid more while putting the Tigers at a greater physical disadvantage. He says he expects a better showing in these matchups than Savannah State had against Oklahoma State and Florida State.

Critics of FCS versus FBS contests base their opposition in large part on the theory that FCS schools risk injury to their student athletes by scheduling opponents that are superior physically and numerically—FCS schools have a maximum of 36 scholarship athletes, FBS 85—in order to make their budgets.

“For people to say we’re prostituting kids, doing something wrong, I take offense,’’ Steward says. “That’s the business of football. I don’t find any flaw. They (FBS programs) are looking for a game where they can evaluate their kids. We’re looking for a game for our kids to see (football) at another level.’’

“All of us are trying to improve our programs,’’ he says,” and more importantly enhance the experience of playing college football. One of the ways we can do that is by allowing our guys to play in the different arenas that FBS schools have.’’

In the meantime, 106 of 125 FBS teams will play at least one FCS opponent in 2013. The matchups include Alabama State at Kentucky, South Carolina State at Clemson and Bethune-Cookman at Florida State. Only time will tell if there will be more such matchups in the future.

“It’s hard to say…,’’ Norfolk State athletic director Marty Miller says. “It’s too early to tell. We’re going to have wait and see. We have enjoyed the relationship and it has been beneficial. I’m not concerned.’’