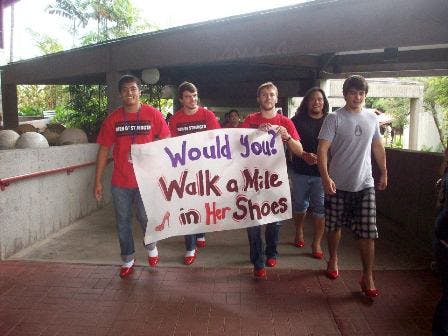 At the University of Hawaii at Hilo, the nonprofit Men Can Stop Rape’s Men of Strength chapter marched to call attention to the fact that one in three women around the globe is raped or beaten in her lifetime.

The last couple of years have brought more business for groups that advocate for rape prevention programs on college campuses, in light of two very public high-profile sexual assault cases — the 2010 Lizzy Seeberg case at Notre Dame University and the Jerry Sandusky scandal at Pennsylvania State University. Alison Kiss, executive director of the Clery Center for Security on Campus, notes, “We have seen an increase in institutions looking to our organization for training, resources and technical assistance.”

Indeed, Saundra Schuster, an attorney at the National Center for Higher Education Risk (NCHER), agrees. “There is a great deal of concern on the part of schools to review and often revise their existing policies, or in many cases, create policies that address sexual harassment and sexual violence.”

The “Dear Colleague Letter” by Assistant Secretary for Civil Rights Russlynn H. Ali at the U.S. Department of Education’s Office of Civil Rights on April 4, 2011 and the breaking of the Jerry Sandusky case at Penn State created a vortex of a wake-up call to campus officials, says Schuster. “The fact that the OCR began doing voluntary compliance reviews and not merely responding to a complaint communicated to schools that they were serious about the enforcement of the Title IX Guidance.”

Last October, RAINN and Cosmopolitan magazine partnered to publicize the issue with a contest for the best multimedia projects about sexual violence on campus. Judged on creativity and effectiveness in communicating the message, the submissions were part of RAINN Day activities.

“Students are being more creative,” says Erhardt, citing how San Jose State University hosted a flashmob, called “Dancing in the RAINN,” and Miami University in Ohio decorated umbrellas. Each school has to tailor its campaigns and awareness programs to its populations, notes Erhardt. “There are lots of different ways to hold these events.”

Taking cues from the University of New Hampshire, the University of California, Merced adopted the “Know Your Power” bystander social marketing campaign to engage the community at large on sexual assault and relationship violence, thanks to a $45,000 grant from the Verizon Foundation.

At the Clery Center, Kiss is particularly excited about one upcoming project, the Collaborative Documentary Project.

“The Clery Center has partnered with five universities that are making student-produced documentaries about sexual assault, which the Clery Center will be distributing at fivedocsplus.com,” says Kiss.

At the University of Hawaii at Hilo, the nonprofit Men Can Stop Rape’s Men of Strength chapter, a cohort that supports college males to serve as change agents, partnered with the community for a “Stand Strong” initiative for the One Billion Rising campaign, which drew attention on Valentine’s Day to the fact that one in three women around the globe is raped or beaten in her lifetime. The school’s chapter is also hosting a film screening of The Invisible War, a documentary on sexual abuse in the military. “We have also recently revised our campus sexual assault policy,” says Dr. Luoluo Hong, vice chancellor for student affairs.

Still, raising awareness doesn’t necessarily boost prevention programs. But the reauthorization of the Violence Against Women Act by the Senate in February is encouraging, says Erhardt. The bill promises to not just continue with the Department of Justice’s Violence Against Women grant program, which provides funding to prevention initiatives, but proffers advocates and programming, solid policies, comprehensive grievance procedures that are fair and effective and significant communication on where to report to and what happens when sexual misconduct is reported, says Schuster.

VAWA also would funnel money to get the backlog of rape testing kits up to date and create deadlines to meet statutes of limitations, says Erhardt, adding, “There is a huge backlog of DNA testing kits.”

Greater accountability is also prevailing in college athletics. “I believe the child sexual abuse incidents uncovered at Penn State served as a far greater catalyst to the NCAA to begin making public statements and exerting accountability for college sports programs when it comes to violence,” says Hong, pointing out that at the NCAA Dallas meeting in January, there was discussion about how to encourage college athletics programs to institute more programs to reduce sexual abuse. “I was certainly optimistic to see this,” she says.

Kiss of the Clery Center has also discerned change. “One trend we’ve seen is the focus on evidence-based programs, particularly primary prevention, which works to change attitudes and behaviors that allow violence to occur and truly prevent victimization, rather than just effectively respond.”

While Kiss suggests engaging campus leaders in pressing for prevention programs, she stresses that certain athletic programs (for better or worse) may greatly influence campus culture. She says this can be a good tool for administrators if they charge student-athletes to become leaders in advocacy.

Hong insists that this can be very difficult. “Under the current climate in which most Division I intercollegiate athletics programs operate [and some Division II and Division III], it will continue to be very difficult to promote change; closed cultures inherently are challenging to alter, and football programs in particular are, by their nature, extremely male-dominated.”

Overall, Hong adds, “Frankly, I haven’t seen any large-scale movement to courageously ask the kinds of difficult questions that will result in transformation of college athletics that will dismantle the core systems of patriarchy and rape culture.”

Schuster concurs, noting that she has not seen much development within sports programs.

Systemic barriers to creating and sustaining sexual assault prevention programs also pervade college campuses. Schuster of NCHER, which also does hundreds of programs with students for prevention and provides policy manuals, delineates the impediments tend to be training, financing and staffing at schools. Hindrances vary with every school, says Kiss. One may have limited funds, while another may have no on-campus housing.

“We encourage colleges and universities to consider how they can turn prevention into a year-long conversation by addressing it through multiple methods — in-person programs, online modules, poster campaigns, class curriculum, etc.,” she says.

The publicizing of the gang rape case in New Delhi, India, last December underscored how violence against women is a global issue, says Hong. “As our higher education community becomes increasingly international and interdependent, we have to collaborate with our colleagues around the world to improve the status of women everywhere,” she says.

Although Hong worries that some sexual violence awareness initiatives may only come off as cosmetic at colleges and universities, she concedes that some progress has been made. Still, there is much to be done.

“Incidents like what happened at Penn State and Notre Dame are helping to bring conversations out into the open, but I think our fundamental approaches to preventing sexual violence remain largely the same: focus on ‘stopping’ the few ‘bad guys’ who might rape or assault, increase penalties for those found responsible and increase risk reduction programs for potential victims.”