Governance Association Says Colleges Must Step Up or Face Shutting Down 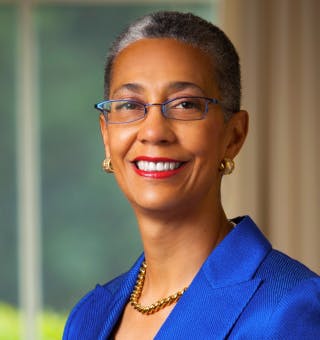 Mills College President Alecia DeCoudreaux says, “We need to operate more like a business and pay attention to what our customers need and want.”

SAN FRANCISCO — Unless colleges and universities respond to technology demands by students as well as shifting workforce needs, the fiscal challenges clouding the academic landscape will not only deepen but perhaps force some institutions to shutter, several higher education leaders said Sunday.

“We have enormous infrastructure but dwindling numbers of students,” said Mills College President Alecia DeCoudreaux. “This is not only true at Mills but throughout academia. Parents don’t understand the value of college education. Our students use other ways to get the product. We need to operate more like a business and pay attention to what our customers need and want.”

DeCoudreaux’s remarks came during the first day of the annual meeting of the Association of Governing Boards of Universities and Colleges (AGB). The association focuses on governance-related issues by studying transformative trends in postsecondary education and the responsibility of boards to lead the change. AGB provides guidance to trustees, board leaders and campus leaders in their governance-related roles.

Dr. Tony Coles, vice chairman of the Johns Hopkins University governing board, echoed DeCoudreaux’s comments by describing the habits of his two children, who are both college students. They often stay up late streaming a movie online—that actually aired the previous night.

“We need to meet the consumer of tomorrow where they are today,” Coles said. “Young people are already getting the content they want when they want it and how they want it. As an industry, higher education is in a crisis, and our business model has to change. What if there’s another economic recession? What would we do then?”

He and DeCoudreaux participated in an opening plenary session titled, “The Velocity and Trajectory of Change in Higher Education,” moderated by Dr. Richard Chait, professor emeritus of the Harvard Graduate School of Education. The session produced a spirited discussion about some of academia’s greatest strengths—and weaknesses.

The potential implications of massive open online courses (MOOCs) were also part of the discussion. Dr. Nancy Zimpher, chancellor of the State University of New York, predicted that the providers of MOOCs “will eventually partner” with the long-established, brick-and-mortar, higher education institutions.

But DeCoudreaux cast doubts as to whether many schools could realistically pursue such deals. Wellesley College, for example, is poised to gain a MOOC partnership, she noted, “but it’s expensive, and I’m not sure many schools can afford them.”

Chait then specifically asked whether DeCoudreaux feared MOOCs might drive some brick-and-mortar universities out of business.

“I actually do,” she responded, pointing out how the number of liberal arts colleges nationally has already dropped in the past decade. She underscored the importance of such colleges, which include Mills, saying, “We teach students how to think.”

At Mills, DeCoudreaux leads an undergraduate program dedicated solely to women, although its graduate studies are open to men. About 52 percent of undergraduates are minorities; among graduate students it’s 43 percent. DeCoudreaux has been a Wellesley trustee since 2002 and was chairwoman of its governing board for five years before joining Mills in 2011. Prior to her presidency, she spent 30 years at Eli Lilly and Company as a lawyer and executive in positions such as vice president and general counsel for the pharmaceutical giant’s U.S. affiliate.

The AGB conference, which runs through Tuesday, is offering sessions on topics such as, “The Board’s Role in Ensuring LGBT Inclusion,” “Athletics: The Board’s Role in Oversight” and “The Impact of Fiscal Realities on Institutional Mission.” The meeting drew 1,200 participants, including about 50 from other countries.

At Sunday’s opening plenary, DeCoudreaux said that educators need to better prepare students for all types of careers. “It’s short-sighted if we prepare them for only a few careers because those careers may be gone in a few years.”

However, educators shouldn’t stretch themselves too thin either, she said. As an example, Mills offers only three foreign languages, compared with 20 at Wellesley. “We cannot be all things to all people,” DeCoudreaux said. “I don’t believe Mills has to teach every language our students want to learn, so perhaps by partnering with other institutions we can perhaps deliver that.”

Coles noted how higher education remains “one of the great equalizers” of society, with the ability to uplift untold numbers out of grinding poverty and other hardships.

Purdue University governing board chairman Keith Krach announced that his school won’t increase tuition for at least two years, a collective decision made on the matter for the first time in 37 years. He called students “a noble cause to crusade for,” and insisted that basic access to education was at stake.

Several sessions described as “pre-conference workshops” occurred prior to Sunday’s opening plenary, including one titled, “Governance Challenges Confronting HBCU Boards and Presidents: Financial Stress, Competition and Mission Relevance.” Thirty-plus individuals attended, most of them regents and trustees from boards throughout the country.

When a reporter for Diverse arrived during the third hour of the three-hour workshop, an AGB staff member escorted her from the room, saying that workshop participants signed up for the session “with the understanding” it would be closed to outsiders. When the reporter asked the staffer to ask participants if they would mind a single reporter’s presence, the staffer declined but said workshop co-facilitator and AGB board member Joyce Roché would grant an interview after the session. During that interview, Roché described the dialogue during the session as “fantastic.”

“We’re all dealing with the same big issues, looking at governance issues as they surround the institutional issues,” said Roché, who’s also chairwoman of Dillard University’s governing board. For instance, board members at many HBCUs are examining student enrollment trends, such as racial demographics, and considering what the appropriate ethnic composition ought to be. Board members are also questioning whether academic courses that have been offered decade after decade remain relevant in today’s curriculum as well as whether their institutions are failing to incorporate courses in new subjects.

“It seems the right questions are being asked and traditional things are being challenged,” said Roché, characterizing the closed-door discussion among regents and trustees. “We don’t want to play with the historical mission of HBCUs but it’s critical to challenge what’s taking place on campus.”