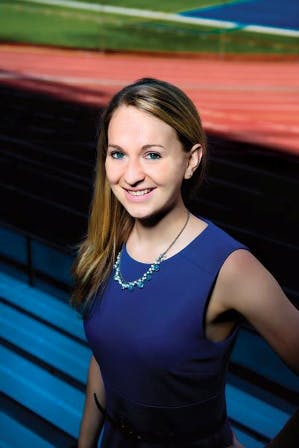 Anna Aagenes is a founder of GO! Athletes, a national network of current and former LGBTQ student-athletes and allies.

Voices are emerging and organizations forming that promote a welcoming and safe environment for LGBTQ (lesbian, gay, bisexual, transgender and questioning) athletes in intercollegiate athletics, and the 20-somethings—gay and straight—are leading the way.

The ever-present videos on youcanplayproject.org make a clear statement: “If you can play, you can play.” But can you? If a wave of recent college graduates have their say, college sports will be an open and inclusive environment, regardless of sexual orientation or gender identity.

“There has been real change in terms of the athletes themselves,” says Dr. Pat Griffin, professor emeritus in the social justice education program at the University of Massachusetts and now a consultant on LGBTQ issues in college sports. Griffin recently worked with the NCAA on an 82-page resource guide, titled Champions of Respect, that was released on March 4.

“I always tell the coaches that their athletes are well ahead of them,” she adds. “It is just not that big a deal to a lot of the athletes whether or not they have gay teammates. I’m talking about men and women.

“If the coach is not comfortable, the coach has all the power. The coach determines what the climate is like on the team.”

This can account for why a study published by Campus Pride, the 2012 LGBTQ National College Athlete Report, details a more negative climate in terms of discrimination toward LGBQ athletes (transgender responses were minimal) than for their heterosexual peers. A negative environment can impact athletic and academic performance.

“I would say it’s a climate of fear in terms of a lot of people don’t want to be the first one to be out, to be different,” says Anna Aagenes, one of the founders of GO! Athletes, a national network of current and former LGBTQ student-athletes and allies that serve to educate and empower.

“The main problem is people don’t know if it’s safe or not,” explains Aagenes, a 2010 graduate of the University of Pennsylvania and former track athlete. “Overt homophobia and overt transphobia are not that common. I would say the most common thing is … casual homophobia.

“Most people don’t intend to be bullies or to come off as homophobic or bigoted, but where people don’t watch their language, it can translate into some really nasty environments for a closeted athlete.”

A recurring theme is the growing presence of straight allies. One of the most vocal and visible is former University of Maryland wrestler Hudson Taylor, who in 2011 founded Athlete Ally, which has the motto, “Victory through unity.”

“So many people now are speaking out and working to make sport a safe space for everyone,” says Taylor, an assistant coach at Columbia University. As a theater major in college, he was exposed to numerous gay and lesbian students and came to realize how demeaning and damaging heterosexism in sports is.

“Sports teach men and women to act, look and dress a certain way,” says Taylor. “[Participation in sports] systematically marginalizes, isolates and segregates anyone who is perceived as different than that.”

When he started speaking out about creating a welcoming environment for all athletes, Taylor found that the hardest part was getting straight teammates to understand that these issues pertained to them. Taylor is frequently asked to speak at college campuses about how to change the athletic culture. Athlete Ally asks athletes, gay and straight, to speak up and promote unity. High-profile professional athletes such as Kenneth Faried of the Denver Nuggets, Brendon Ayanbadejo of the Baltimore Ravens and Chris Kluwe of the Minnesota Vikings have joined Athlete Ally.

“There are steps that institutions can take, coaches can take and athletes can take to create more inclusive, affirming environments for the LGBT community,” says Taylor.

Setting institutional policies is not enough. University presidents and athletic directors must provide clear and consistent direction, which is often not the case.

“If the athletic director is not setting a tone, where coaches have some kind of sense that they can’t just operate on their own individual prejudices, then you have a problem,” says Griffin. “If you talk to the athletes about what kind of climate there is at a school for LGBT athletes, it totally depends on the coach of the team, because there are no departmental expectations made public.”

“It’s too often the case that athletic directors don’t say anything, even if they don’t necessarily have anti-gay perspectives,” she continues. “Some coaches assume it’s possible to engage in homophobic conduct.”

The NCAA cannot set personnel policies, do the recruiting on campuses or develop mission statements. Those are institutional issues. On many social justice issues, the NCAA plays the role of educator and facilitator of conversations among its membership. The NCAA also provides leadership through its governance structure.

From April 30 to May 2, the NCAA will host an Inclusion Forum at its headquarters in Indianapolis. The goal of the forum is to bring together leaders and interested parties who want to improve the educational and professional environment for student-athletes, coaches and staff. Topics will include policy, research and best practices for racial and ethnic minorities, women, international student-athletes, LGBTQ and disability access to sports.

“I believe that we’re at the cusp of an enormous cultural change for college sports with regard to LGBTQ inclusion,” says Karen Morrison, NCAA director of inclusion. “The student-athletes are leading the way for us. It’s really a different expectation from our student-athletes—straight or not straight—about the fact this should be an issue of inclusion. That will lead us to a major change.”

One of the panels at the forum will feature Aagenes, Taylor and Kye Allums, a female-to-male transgender athlete who propelled the development of transgender policies from the NCAA. Morrison affectionately refers to it as the “let the children lead the way” panel.

Allums was a member of the women’s basketball team at George Washington University when he came out as transgender in November 2010. He says he didn’t plan on being a highly visible agent of change, but, after hearing from other transgender athletes, he knew there was a need to develop policies. The NCAA’s office of inclusion now has a handbook about transgender inclusion available for its members.

“My teammates were so supportive,” says Allums, who continued to play on the women’s team that season. “It did take them awhile to adjust.” The relationships he had built with his teammates made their acceptance possible.

Allums still has two years of eligibility remaining, and he’s considering trying out for the men’s basketball team at New York University, a Division III school.

“I’m going to practice with them a little bit and see how that goes,” he says. “I want to create change. I’m pursuing a master’s degree in educational leadership so I can know policy and be a better advocate.”

Although discussions are now going on openly, it is premature to assume homophobia and discrimination are not still rampant in college sports. While the 2012 LGBTQ National College Athlete Report does show that more female student-athletes are out than male student-athletes, women face additional problems.

“In women’s sports, we still have a huge problem with sexism—trying to get ahead with jobs, coaches feeling they need to be closeted to be accepted,” says Helen Carroll, sports project director of the National Center for Lesbian Rights.

While it may be somewhat easier for female student-athletes to come out, those interviewed say it’s actually easier for male student-athletes to be straight allies. Straight male allies rarely have their sexual orientation questioned, but several of the people interviewed noted that straight female allies often face the assumption that they’re lesbians, which holds some of them back from being vocal advocates.

Race is also an issue compounding the fear of coming out for some student-athletes.

“As a minority, there is added pressure to fit in, and, when you can’t find your likeness in the Black community or in a predominantly White LGBT movement, this can be isolating,” says Nevin Caple, co-founder and executive director of Br{ache the Silence, a campaign created to give a platform for athletes, coaches and administrators to openly express their sexual orientations and gender identities without fear of retaliation.

“LGBT inclusion is now a professional topic that athletic departments can no longer ignore,” says Caple, a former Division I women’s basketball player. “People are so grateful to know someone is speaking up on their behalf, and LGBT inclusion is finally becoming an expected part of sports.”