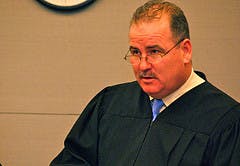 Like all the defendants appearing before Judge Patrick Dugan on a recent Wednesday, Piscitelli and Peters are veterans who chose to have their cases handled in a special court established for those once in the military.

More than justice is meted out.

Before the judge takes the bench, a volunteer approaches the veterans one by one offering help with such things as resume-writing and job hunting. A second volunteer steers them to long-distance runs and fitness classes. A representative from a community college discusses the advantages of higher education.

There’s also a worker from the local Veterans Affairs medical center who’s checking to make sure defendants are getting doctor appointments, disability benefits, housing vouchers or any other benefit to which they’re entitled.

The veterans court operates under the philosophy that many of the defendants who have run into trouble with the law need treatment, not incarceration. Some courts only take misdemeanor cases. Some only handle veterans who received an honorable discharge.

The city has been at the forefront of an experiment that has mushroomed across the nation. In 2008, there were just five veterans courts in the United States. By the end of last year, there were 166.

Dugan, the judge, is an Army Reserve captain who served in Afghanistan and Iraq. He has been at the helm of the court from the start.

The veterans who appear before him face a range of charges that stem primarily from substance abuse. Sometimes that abuse started in the military. Sometimes, it was a problem before a veteran ever thought about enlisting. Dugan is determined to give them a second chance, and sometimes a third or a fourth.

“If you take any human being and you put them in situations the military puts you in, it’s going to affect you. For the rest of your life it’s going to be there. Some people can handle it. Some people see more and come back with baggage,” Dugan said. “In the military, they teach you to shoot a weapon, but they teach you to shoot a weapon at a human being.”

When Philadelphia opened its court three years ago, many initial defendants were older veterans, often homeless and longtime drug and alcohol users.

“It was actually almost easier to deal with them,” said Guy Garant, who served in the Marine Corps before becoming a prosecutor 24 years ago. “I don’t think we ever expected we would turn their lives around totally. We turned maybe a couple of lives around totally. The others we just helped stabilize.”

As the program has matured, more veterans from the wars in Iraq and Afghanistan have entered the system. Their problems can be just as severe. Some seem determined to become a casualty of war.

“It’s hard to even convince them to turn around. Some of these guys look at you like you’re a Martian. I can’t describe it,” Garant said. “We’re really putting them through the wringer just to get them stabilized.”

To underscore Garant’s point, one of the veterans in court had tested positive for PCP during his latest drug test. As a result, Dugan ordered him to report more frequently for testing, and he extended the veteran’s probation by 30 days.

Dugan said some of the veterans rely on pain killers and opiates to deal with the physical and mental wounds of war, and that can lead to heroin, which is generally cheaper.

“Heroin is killing these guys,” Dugan said in an interview in his office. “It’s killing them.”

The evaluation of the nation’s veterans courts is in the early stages. The Department of Veterans Affairs found that 7,724 veterans had entered the courts through 2012, and more than half were still being monitored and treated.

Of those who had finished veterans court, about two-thirds graduated successfully. The others were transferred to other courts, quit the program or suffered illness or death. Studies are in the works to determine longer-term recidivism rates.

The amount of support each veteran has at his or her disposal helps explain why so many cities and counties have started the courts. With many local governments cutting social services, these courts give communities the chance to tap the vast resources of the federal government. In a typical criminal case, social services such as inpatient treatment rarely come into play, Dugan said.

But in veterans court, VA social workers arrange housing for the homeless, drug counseling for the addicted and therapy for those with post-traumatic stress disorder. The federal resources dedicated to helping each defendant generally reaches into the tens of thousands of dollars. Nearly 200 workers around the country are assigned to help veterans in the justice system access their VA benefits.

“VA health care is the lifeblood of a veterans treatment court, and that has been true since the first one launched,” said Sean Clark, the national coordinator for the VA’s Justice Outreach Program.

The veterans with the most serious problems report to their probation officer weekly for a drug test.

Piscitelli was considered such a risk that he initially had to report twice a week. Others report just once a month.

Participation in veterans court is voluntary. Veterans can have their cases heard in regular municipal court if they wish or in the treatment court for the community at large.

Representatives from the prosecutor’s office and the public defender’s office say many of the veterans probably would find it easier to go through regular municipal court because that often means a few hours of community service and a fine.

Opting in requires regular appearances before Dugan, meetings with the court’s probation officer, stellar attendance at treatment and counseling sessions, and frequent drug tests. If they succeed, they’ll often have their charges dropped or expunged.

“I tell them that up front, ‘If you want the easy way out, if you’re not committed, if you’re not ready for it, we’ll give you something else,’ said Melissa Stango, the public defender who represents the vast majority of the veterans. “Surprisingly most of them choose to stay.”

One of those given that choice was Peters, who entered the Army shortly before the terrorist attacks of Sept. 11. Peters, now 38, served a six-year stint that included deployments to Afghanistan and Iraq where he was responsible for storing and shipping munitions. When he returned to the states, he failed a surprise drug test and was given a general discharge.

“We had a ton of money, and it was just about partying. That’s really all there was to it. I made a mistake. And I have to live with that,” he said.

Peters said drugs were not a major problem for him after he moved to Philadelphia, but alcohol was. He was arrested twice for assault and spent about 30 days in the county jail when the public defender’s office brought up the possibility of participating in veteran’s court. A representative from the local VA medical center worked with him to get him into a treatment program. The VA is paying for his college computer classes.

Dugan relished hearing that Peters was going back to school.

“You’ve got to make sure they’re C’s, minimum,” Dugan said. Moments later he returns to his pet issue, urging the defendants to take advantage of generous educational benefits for returning veterans. He said the only reason he’s a judge is that he has a piece of paper showing that he’s got a law degree.

“I’m no smarter than when I was a bartender,” Dugan tells the veterans.

Piscitelli is among the veterans reeling from heroin abuse. His drug of choice upon returning from Iraq was OxyContin, a highly addictive pain killer. He said he was spending as much as $500 a day on drugs, and when money started to get tight, acquaintances turned him on to heroin, which could be found for as little as $10 a bag.

He recalls his dad pleading with him to take stock of what he had become, but he was too far gone.

“Being addicted to such a powerful drug, you do anything to make money, so I started committing crimes, petty crimes, whether it was retail thefts, or whatever means we had to do to steal or manipulate to get money,” he said.

By the summer of 2011, Piscitelli had been arrested four times, twice for possession and twice for retail theft. He sat in the county jail for nearly two months before court officials learned of his status as a veteran and offered him the chance to consolidate all of his charges in veterans court.

He would have to get therapy, pass his urine tests and stay out of trouble. If he does, he’ll successfully complete the terms of his probation. If he fails, he’ll face the prospect of a revocation hearing and going to jail.

Piscitelli has a long way to go, but like many of the defendants who lined up before Dugan, his future is looking brighter. He hasn’t failed a drug test since he entered veterans court more than a year ago. He’ll have to keep it up for about another year to join one of the court’s twice-yearly graduation classes.

Outside the courtroom, Peters and Piscitelli reflected on their experience so far. Jail served as a big motivator, they said. The social services the court connected them with gave them the structure they needed to start healing.

“I was so busy, and I guess I’m grateful for it,” Piscitelli said. “Being held accountable for in so many different places gave me a chance to start getting my life back.”