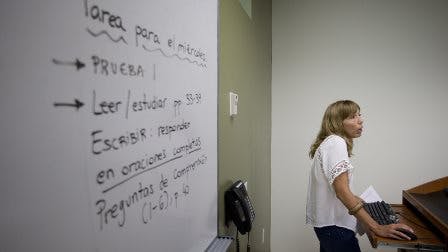 Heritage language programs, such as Chinese, Korean, Russian and Farsi, are increasing at universities.

MIAMI—Dorothy Villarreal grew up dreaming in Spanish, first in Mexico and later in South Texas, where her family moved when she was six. She excelled in school in English. But, at home, life was in Spanish, from the long afternoon chats with her grandparents to the Spanish-language version of Barbie magazines she eagerly awaited each month. She figured she was fluent in both languages.

Then the Harvard University junior spent last summer studying in Mexico and realized just how big the gaps in her Spanish were.

“We were talking about the presidential election, and there was so much I wanted to explain,” Villarreal said. “We’d end up playing a guessing game where I’d speak in English, and my friends, they’d speak back in Spanish to guess what I was saying.”

Villarreal’s experience is increasingly common in America, where one in five children grows up in a home where English isn’t the sole language. To help them fill in the gaps, universities are adapting their foreign language curriculum, in part to better prepare graduates for a globalized world where it pays to be professionally fluent in more than one language.

Children in multi-lingual homes grow up a step ahead of other would-be language learners. They can easily engage in small talk or follow the latest soap opera in their families’ native language. Yet when it comes to meatier topics, or reading and writing, they are stuck.

The linguistic gaps become apparent in high school, where these students can snooze through basic language classes but often drown in more advanced ones if their heritage language is even offered. After all, how many American high schools offer Arabic or Korean?

With 37 million Spanish-speakers in America, most heritage classes are in Spanish, and courses have bloomed across campuses in California, Florida and several Southwestern states. They have also begun to take hold in schools like Harvard University, which added a course this year.

Villarreal, who hopes to work in Latin America for an international business or for the U.S. government, “and not make a fool of myself,” was among the first to sign up. She jumped at the chance to beef up her formal Spanish without the pressure of an advanced class with non-Latino classmates who might have thick accents but rarely misplace an accent mark.

That pressure, and the embarrassment of not being able to read or write a language they are supposed to know, can hold students back in regular classes, said Harvard Professor Maria Luisa Parra Velasco, who created the new Spanish course. So too can the stigma of speaking “bad Spanish,” or a more colloquial version of a language they learned at home, she said.

Beyond language, the heritage class offers Villarreal a rare academic space to examine topics she’s less comfortable talking about with her mostly white and upper-middleclass peers. She contrasted the heritage class with the course she runs to immediately after: an advanced, general Spanish class on cultural practices of the U.S.-Mexico border. In that class, Villareal said she is uncharacteristically quiet.

“We’re talking in this abstract way about what the border is, and I’m thinking I went to school five minutes from the border. For me the border is what shuts down my school when the (Department of Homeland Security) helicopters come to find the people trying to cross,” she said.

Heritage language programs have existed in the U.S. in some form for more than a century as a way to retain both language and culture even as English-only movements waxed and waned. German schools were common in the late 1800s. Youth in California have long attended weekend Chinese and Japanese programs. Bilingual Spanish classes have been around for decades.

Yet the development of separate heritage language university instruction is relatively new. The University of Texas-Pan American received funding from the Department of Education in 2007 to create a minor in medical Spanish for heritage speakers, and other schools are beginning to replicate the program.

Spanish classes aren’t the only heritage courses on the rise. Harvard already has heritage programs in Russian, Chinese and Korean, which the U.S. government considers strategically critical languages for diplomacy and counterintelligence.

The National Heritage Language Resource Center at the University of California, Los Angeles, funded by the U.S. Department of Education since 2006, recently conducted the first national survey of higher education heritage instruction and found specialized instruction in 34 states. Chinese, Korean, Russian and Farsi were among the most popular after Spanish.

Separate tracks can be particularly useful for languages like Chinese or Hindi, where instructors are more likely to get heritage learners who can speak the language but can’t read even basic characters marking them as decidedly betwixt and between their beginning and advanced level classmates.

Arabic also poses unique challenges. Regional variations of the language can vary so much from the Modern Standard Arabic taught in American schools and used for business and diplomacy in the Middle East that a student who grew up speaking the language at home often can’t read, write or speak the more formal Arabic.

Still, heritage Chinese speaker Daphe Ko, a sophomore at the City of New York’s Hunter College, said mixing students like herself with those new to the language and culture can have benefits.

“They can identify a kind of grammar structure that I just took for granted, so we kind of help each other,” she explained.

Ko grew up speaking the Cantonese dialect at home with her family but couldn’t read or write, and she always wanted to learn Mandarin the dialect her parents spoke when they didn’t want her to understand. She’s now double majoring in biology and Chinese through Hunter’s intensive Chinese Flagship Center, created in 2011, which caters predominantly to heritage speakers.

Despite increasing numbers of these programs, funding for them remains limited. University of Pennsylvania Professor Emeritus Surendra Gambhir helped start one of the nation’s first higher education Hindi heritage language programs but said most of the 100 or so schools offering Hindi don’t have the resources to create dual language tracks. The Department of Education cut the Resource Center’s funding two years ago due to budget constraints.

Kimberly Potowski, a linguistics professor at the University of Illinois, Chicago, who is writing a textbook for heritage language professors, says there are significant differences in how language should be taught to heritage learners. For example, heritage students aren’t learning about exotic, foreign cultures, they’re reconnecting with their own. And rather than abstract exercises, they should be encouraged to interview relatives or to analyze emails to friends for grammatical mistakes.

The University of Miami has four heritage Spanish courses for students with different levels of fluency. The students view the language as a practical skill that can give them an edge in South Florida’s bilingual professional world. But even there, the personal experience the heritage is never far from the day’s lesson.

“Let’s think about our own families. Compare Jimenez’s exile to the one we know best,” Aguilo said. The mostly Cuban-American students, many of whose parents or grandparents fled Cuba after the 1958 revolution, nodded.

There was no translation needed.