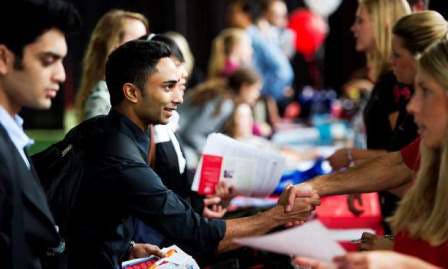 Schools that offer co-op education maintained their high rates of placing graduates in jobs during the 2008-2009 recession — and continue to do so.

Since the recession started in 2008, many college graduates have struggled to find suitable jobs in their fields. Parents and students who have started to doubt a degree’s value may want to consider colleges that offer cooperative education, which allows students to rotate between classes and jobs.

Through co-op education, students gain valuable experience that helps them land jobs after graduation. The dozens of schools that offer co-op education maintained their high rates of placing graduates during the 2008-2009 recession — and continue to do so.

“It’s been demonstrated, and I speak broadly, throughout North America, as well as many other countries we work with, that co-op students do very well in the job market,” says Paul Stonely, CEO of the World Association for Cooperative Education.

Northeastern University, which has one of the oldest co-op programs in the country, is a prime example. From 2006 to 2012, 90 percent of Northeastern grads were in full-time jobs or graduate school within nine months of commencement. Eighty-seven percent of graduates who were working had jobs related to their major. Of those, half had received a job offer from an employer where they worked as co-op students.

“Co-op, we continue to hear, is a big draw,” says Kara Shemin, media relations manager at Northeastern. “I think the word ‘jobs’ and knowing the job market is tough is a draw. It’s also the experience. Kids are going to be better prepared for the workforce because of their time on co-op.”

Henry Nsang left Cameroon in West Africa to attend the University of Massachusetts Boston, taking foundation courses for an engineering degree. Then he learned that the school does not have a complete engineering program and that most students in his situation transfer to other campuses in the state university system.

Instead, Nsang transferred after a year and a half across town to Northeastern.

“I chose Northeastern because I was really interested in the co-op program,” says Nsang. “I’m a very hands-on type of person, so I wanted to get that experience before graduating — just to make sure it was what I wanted to do.”

He continues, “I wanted to make sure that the decisions that I make are the right decisions and the investment I’m making is going to pay off, maybe not immediately, but definitely down the road.”

They did. After graduating in 2010, Nsang’s six-month experience on co-op as a junior engineer in New York helped him land a similar position in Cameroon. He returned to Northeastern for graduate school the next year, earning a master’s degree in environmental engineering in May. Since September, he has worked as a project engineer for a Boston construction company.

“I would say it definitely helped in getting my current job,” Nsang says of his co-op experience.

Cooperative education began in 1906 at the University of Cincinnati. Northeastern started its program three years later. Initially, the rotating work experiences were in engineering. It spread to business next and then across the entire spectrum of academic majors.

Drexel’s numbers on post-graduation placement are similar to Northeastern’s figures. Of Drexel’s class of 2012, 92 percent were employed or enrolled in graduate school, and 44 percent received job offers from former co-op employers.

More schools offer the same option. They include at least 10 historically Black institutions, among them Howard, Hampton and Jackson State universities.

Co-op jobs have been mandatory at Wilberforce University since 1965. Spelman College started a program two years ago.

Typically, employers pay students to work full time for as many as six months at a time. They then spend a similar period in classes. Some schools permit part-time co-ops. Colleges build relationships with potential employers, but students must apply for jobs and compete for them.

Northeastern, for example, has almost 3,000 employers as partners. They include major local companies like retailer TJX, the Boston Globe and data storage giant EMC, as well as state and federal government agencies. The school has employer partners across the country and in more than 100 countries.

Co-op experience helped Juli Hanscom, a 2013 graduate of Northeastern, get her job as the press assistant to Massachusetts Governor Deval Patrick.

A history major, Hanscom did one co-op giving tours of the historic State House on Beacon Hill and another in Patrick’s press office. She graduated last January, and the governor’s staff hired her a month later.

“I think that they were impressed by my ability to handle the rigorous work within the press office as well as the ability to think on my feet,” Hanscom says. “And they knew what they were getting. There wasn’t a need so much as to have a trial period. They had already had that trial period with me in 2011 for six months when I was their full-time co-op.”

Hanscom says “the vast majority” of her friends who graduated from Northeastern this year and the year prior found jobs immediately. The class of 2013 has about 3,000 members.

At Northeastern, the standard options for undergraduates are two co-ops in four years of enrollment or three over five years. Students are heavily advised to do co-op jobs, Shemin says, but have flexibility in how many.

Spelman is a rare liberal arts college replicating what large universities have done. The selective school’s goal is not so much to improve the job prospects of students, but to keep them in school.

“Some of our students, for financial reasons, need to stop out,” explains Kassandra Jolley, Spelman’s vice president for institutional advancement. “So it was really to address the financial budget that we realize our students have each and every year.”

Keith Webb, a former stock trader and human resources officer on Wall Street, was brought in to organize and direct Spelman’s co-op program. He says the small number of students who have participated so far earn an average of $15 per hour while working during the spring semester.

Students have done co-op jobs at Delta Airlines, UPS and the large public relations firm Edelman. Edelman hired an English major after she completed her co-op assignment and graduated last spring. Over the last two years, says Webb, nine students have participated in Spelman’s co-op program, which is expected to gradually grow.

Stonely says the recession did have one limited impact on co-op education: companies offered fewer positions for undergraduate students.

“But those co-op students they did hire, they tended to hire them [permanently] and, obviously, they continued to do well,” says Stonely. “In that perspective, certainly the recession did not hurt the cooperative education field.”